The vast majority of Australians don't trust the media. And former Press Council chairman Julian Disney is right there with them.

The former head of the Press Council says he fears a return to highly partisan, misrepresentative media coverage of political news, and that “news” coverage in the lead-up to the last federal election was particularly egregious.

Julian Disney stepped down from the Press Council in February, after five somewhat tumultuous years. He first fought to defend the APC’s continued existence and independence from government in the wake of the Finkelstein inquiry, followed by an all-out war with News Corp.

In a wide-ranging interview with Crikey this week, he revealed his complaints about the conduct of publishers, editors and journalists in their interactions with the Press Council and his fears that the Press Council’s relationship to its members might become more adversarial as newspapers blatantly took sides in political contests.

“There are signs of a return to the intensely partisan misrepresentations in the press that characterised the last federal election,” Disney said. “As we build up to another election, rather than it perhaps having subsided after the Rudd-Gillard years, it appears to become a permanent feature of the media landscape.”

Adjudications of complaints over political coverage were a frequent battleground in the Press Council’s recent tussles with News Corp — many editors at the country’s largest media company felt the Press Council was overreaching and telling them how to do their job. The Press Council, which has 22 members (comprising nine who represent publishers, four who are “independent journalists”, and the rest being members of the public), came under fire for complaints related to the prominence given to coverage.

For example, in one bitterly contested complaint, independent journalist Margo Kingston complained to the Press Council about the prominence The Daily Telegraph had given to coverage of the Peter Slipper scandal. When James Ashby accused the former speaker of sexual harassment, the allegations were splashed in a great detail on the first three pages of the Tele. But when Ashby’s claims were dismissed, with the judge presiding accusing him of an abuse of process for political reasons, the subsequent developments were only covered on page 17, which Kingston argued was not reasonable or fair given the prominence given to the earlier coverage. The Press Council upheld the complaint.

Disney’s foreword to the Press Council’s annual report, released three weeks ago, included many pointed criticisms of publishers, editors and journalists in their interactions with the Press Council. He said some publishers often resorted to “undue legalism”, held adjudications and other investigations up through “unreasonable delays” in providing responses, and, startlingly, made “unequivocal, but false” statements to the council, while expecting the council to accept their  assertions at face value. 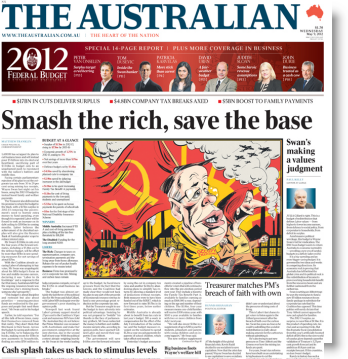 Disney clarified to Crikey that some editors and journalists misrepresented details of how they had come to contact people, or other details relevant to judging a complaint.

“I’m referring to situations where it became indisputably clear that misstatements had been made,” he said. “Usually it emerged there was written confirmation, or evidence from an impartial source, sometimes after we’d handled the complaint.”

The Press Council, Disney says, is very understanding that journalists sometimes need to protect sources or investigation methods. But misrepresentations that came to light in instances where no sources were being protected makes it harder to trust journalists when they say they’re protecting a source, Disney says. “It means we have to check everything they say. In most cases, we weren’t necessarily going to uphold the complaint anyway. But if people say to us they can’t reveal their sources, then we find they’re being deceptive with us about something else, it makes us worry about whether we should trust them about the sources. It makes it very hard for us to trust them in other ways.”

Disney says he sometimes wrote to editors expressing his frustration over these issues.

Of course, journalists face no penalties for lying to the Press Council. The Press Council cannot impose any penalties at all, other than forcing publishers to print an adjudication notice when a finding goes against them. Asked if the council needed legal powers of investigation, Disney said he believed this would just make things worse.

“If the council becomes too legalistic, and in fact too powerful, it will become pretty useless. It will be bogged down in endless debate and obstruction. Then with powerful forces — whether the newspapers or in some cases the complainant — you’d get all the problems of access to justice that we get in the courts. One has to accept that the council shouldn’t have the power to impose any sanctions like fines. It would be a Pyrrhic victory for those who want it to be firmer.”

Disney repeated an argument he’s made many times before — that the Press Council’s greatest contribution to press freedom is in assuring the media remains lightly regulated through a voluntary, respected body made up of publishers and members of the public who adjudicate on complaints.

Crikey has previously pointed out that this contrasts with the attitude taken by current chair David Weisbrot, who, in an interview with Crikey, said he’d like to see the Press Council take on a more proactive role in law reform. Following the judgment in the Hockey-Fairfax case, Weisbrot was quick to add the Press Council’s voice to widespread calls for a reform of defamation law.

Asked if he believes the council’s change of focus is wise, Disney says he’s not in a position to make informed comment. He also notes that “contrary to what News Corp and others may assert, many things done in the council’s name are not necessarily at the behest of the chair”.

Is that the NewsCrap moderator at work again? Really!

“journalists face no penalties for lying to the Press Council”.

Nor the public. it would seem.

In defence of journalists, Myriam, it needs to be remembered that many of them genuinely believe the errors in their statements. Just look at Crikey sites for examples of this.

Murdoch’s “Ministry of Misinformation and Obfuscation”?