It was all about the ALP national conference and BBish's travel entitlements.

The national Labor Party conference over the past weekend got plenty of coverage, putting the Speaker Bronwyn Bishop’s woes at least partially in the shade. Opposition Leader Bill Shorten takes number one with a big lead in broadcast media, gaining his required wins, with the conference backing the support of boat turn-backs despite deep criticism from many on the left, including a few torn up memberships. He also achieved an odd compromise on marriage equality, with the issue staying a conscience vote until 2019.

Shadow Immigration Minister Richard Marles enters the index at eighth place, thrust into the spotlight to defend the differences between Labor and Liberal policy — which seem paper thin now to many in the media. A part of the marriage equality compromise was promising to bring in legislation within the first 100 days of power if elected, with Shadow Trade Minister Penny Wong delivering a heartfelt speech on the issue and entering this week’s top 20 in eleventh place.

Deputy Opposition Leader Tanya Plibersek — up 26 places this week to seventh — faced criticism from Shadow Industry Minister Kim Carr, describing her as “two-faced” for raising no objections towards proposed asylum seeker policy in the shadow cabinet but opposing it at the ALP conference. Shadow Minister for Infrastructure and Transport Anthony Albanese jumped up 19 places into fourth, maybe not because he’s set to spin some mad beats (DJ) this Friday in Newtown, but rather for also voting against the boat turn-backs and being mentioned alongside ALP leadership conversations and Shorten’s image.

Parliamentary entitlements — aka #choppergate — has moved on to focus on weddings, parties, or anything, with Speaker Bronwyn Bishop dropping five places this week but still facing intense scrutiny. The GST has remained in the forefront, with New South Wales Premier Mike Baird in third place after calling for a rise to 15%, and intending to audit local school prayer groups for hints of extremism.

And special mention to Education Minister Christopher Pyne, after he called for more young women in Parliament but rejected the need for a quota. 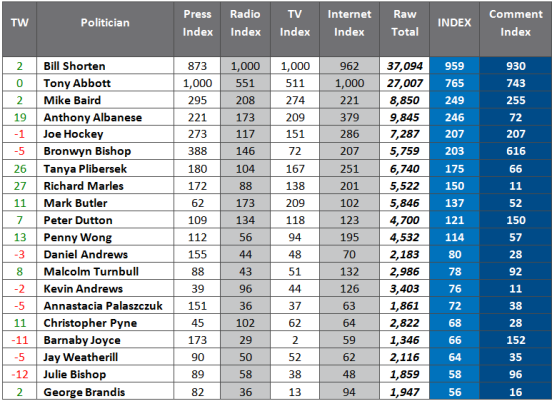 Lower numbers on social this week, with #choppergate memes dipping below the horizon.

I think now is the time to quote those R-rated muppets, Avenue Q, who sing “Everyone’s a little bit racist”. I highly recommend it.