Would the ALP’s ‘Buffett tax’ put an end to tax-rorting millionaires?

Some 55 millionaires paid no tax at all in 2012-13, and they claimed an average of $700 in benefits. Economist and freelance journalist Jason Murphy says that doesn't necessarily mean they are rorters, but the chances are pretty good ...

The viral fact of recent days is that 55 Australians who earned more than $1 million in income in 2012-13 paid no tax.

That true and shocking snippet is being aired in support of a policy proposal for a “Buffett tax“, which the ALP national conference adopted for consideration as part of the party’s policy platform on the weekend. Named for US billionaire Warren Buffett, it would ensure the rich pay a minimum percentage of their income in tax, perhaps 30% or 35%.

In Australia, most people with a million dollars in income are actually decent, running a factory or a stock-broking firm, and paying their workers while also paying their taxes.

But like a crowd at the footy or a Saturday night in the city, a few idiots ruin things for everyone. Turns out, there’s a 1% in the 1%. 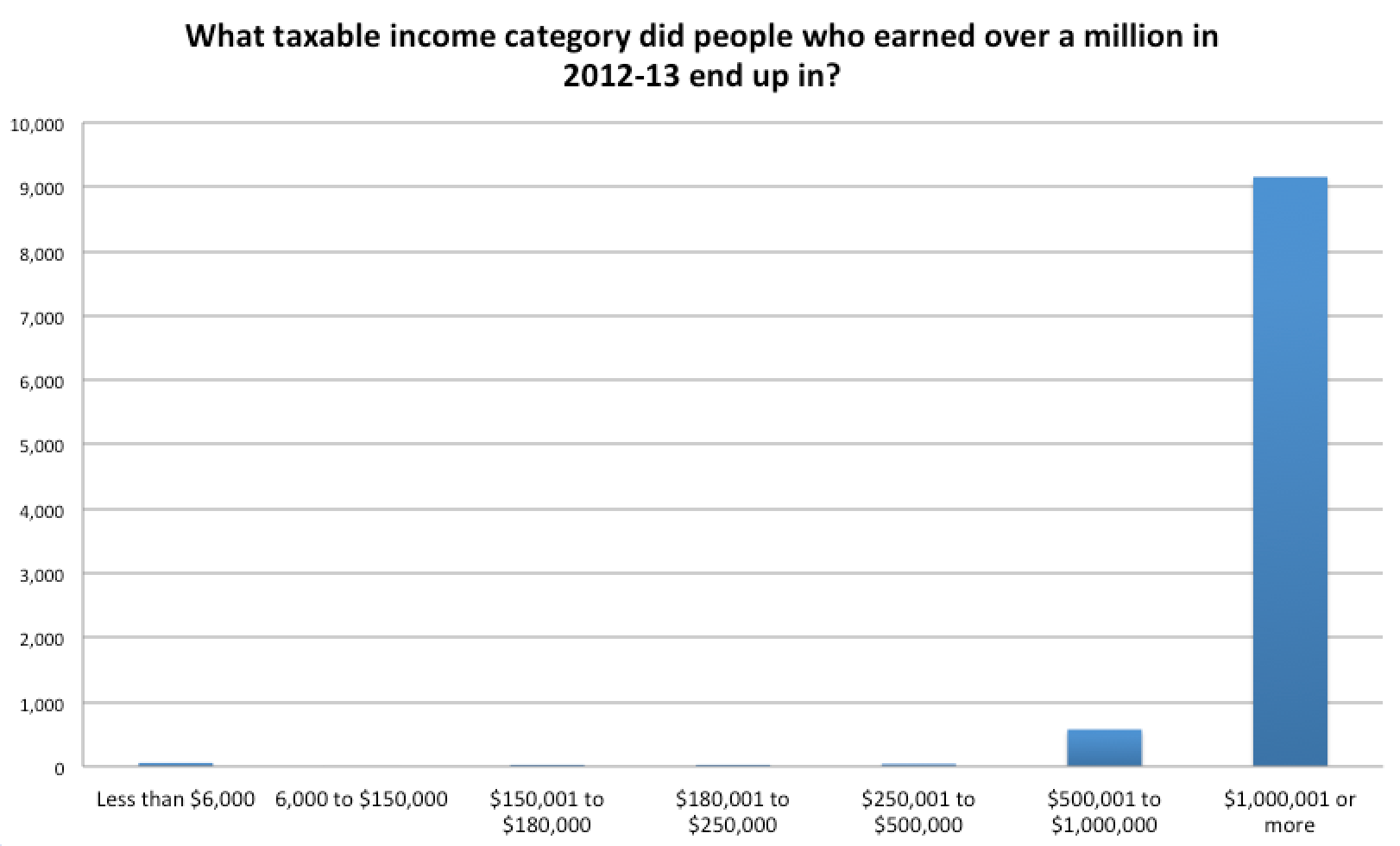 The categories at the bottom of this chart show the size of millionaires’ incomes after deductions. That big line on the right is the 9155 people with an income over $1 million who paid tax on more than $1 million in income. That’s 93% of millionaires.

They are paying an average of $958,000 in tax each, or 43% of their total income in tax. That seems fair. They get great benefit from government services and should contribute according to their capacity.

But what about those 55 zero-tax millionaires — the little blue sliver on the left of the graph — are they all vile tax shirkers?

It’s not totally clear from the data. They could just be unlucky investors who used up all their total income in investing expenses. For some of them, this is likely genuinely the case.

But there are clues suggesting some of them are tax haters — the kind who drop Ayn Rand quotes in conversation and have Ludwig von Mises tattoos that remains unseen until they shed their Charvet shirts. 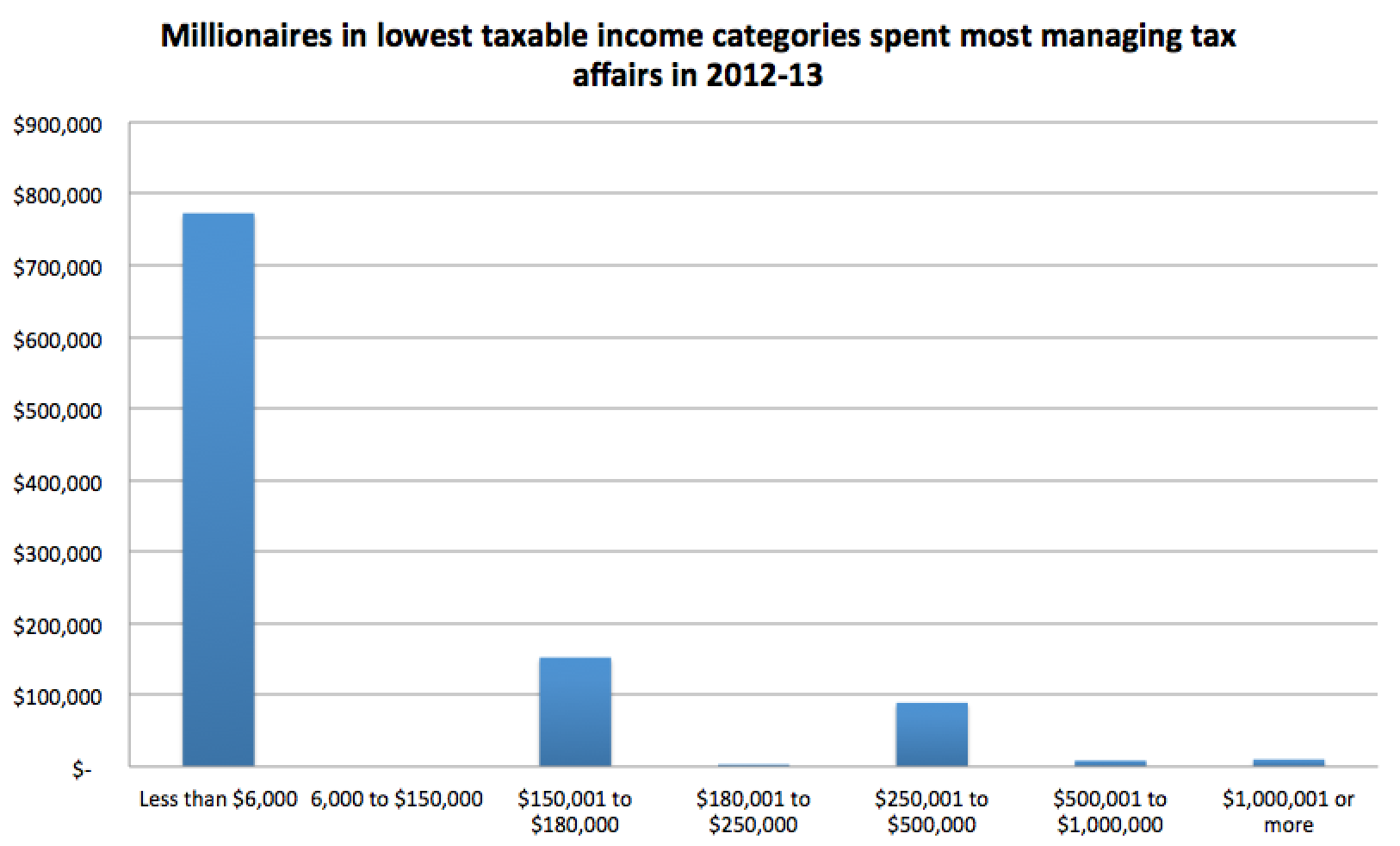 The effect of this is very visible in their average tax rates. 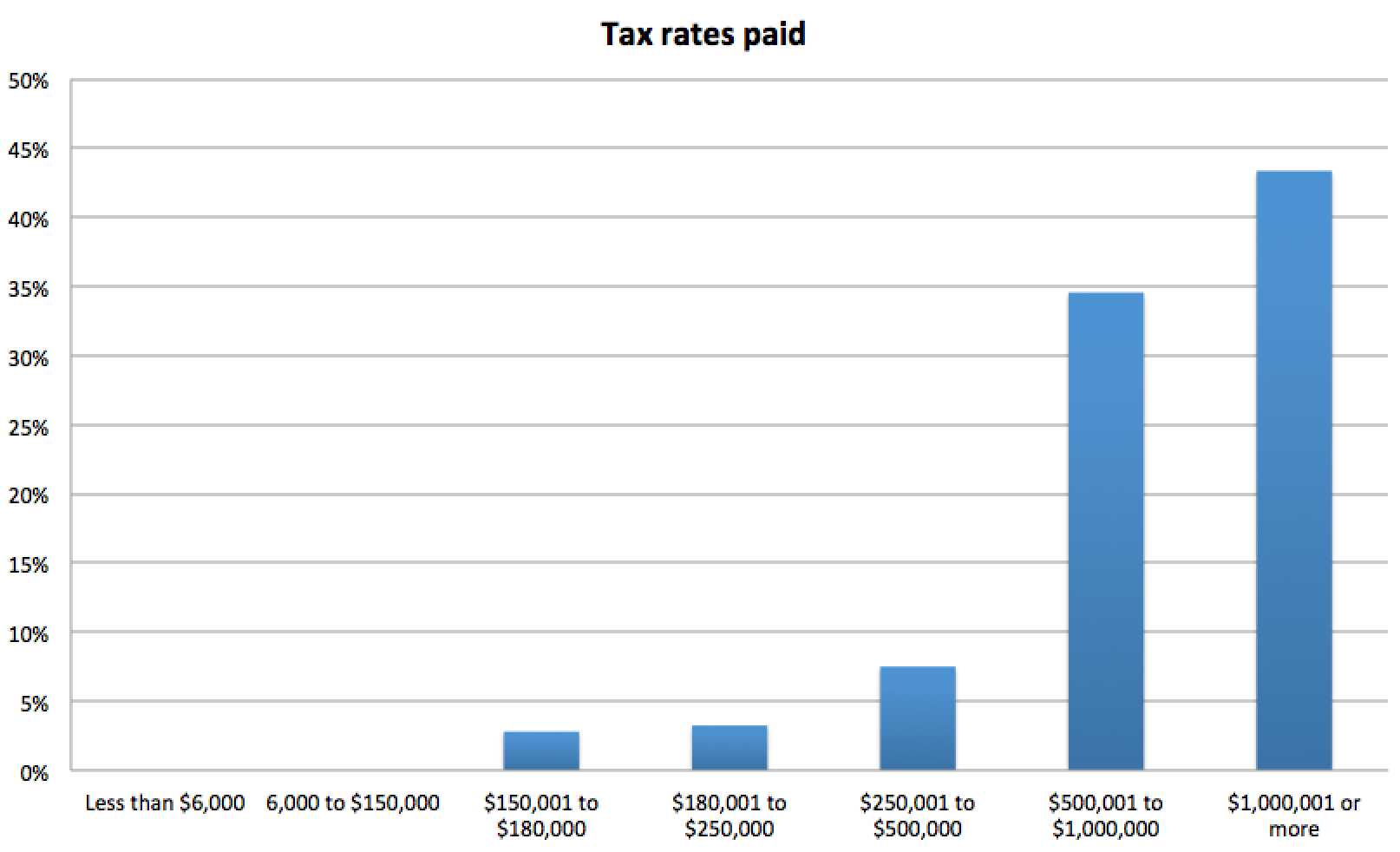 This chart shows that 93% of millionaires pay 43% tax on average, a further 6% (with taxable income just under $1 million) pay around 35%, and the rest pay a lot less.

Also, some of the 55 non-taxpayers might be quite eager to take the government for everything they can. The data show people with $1 million in income but no taxable income after deductions claimed on average almost $700 in government payments. 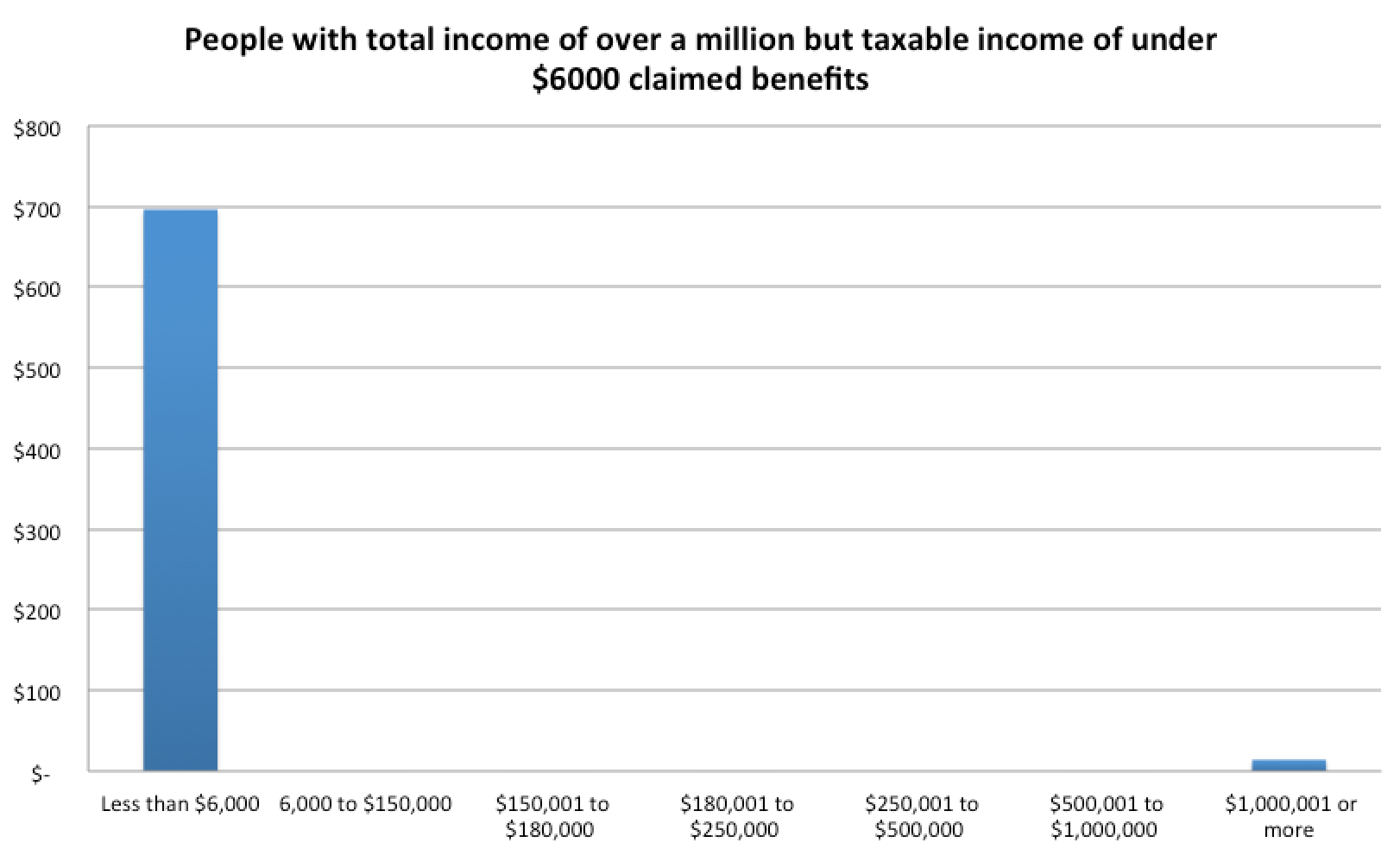 This could be explained in another way, perhaps. If you earn $1 million but have $2 million in expenses in the first six months of the year, go broke, and spend the rest of the year on the dole, that would also explain the benefit claims. Or you could go from Austudy to making millions all in the same year.

It’s a tantalising snippet but not proof positive of rorting.

It is worth mentioning that these same millionaires are generous in other ways. Even the ones who paid no tax because they got their taxable income down below $6000 managed to give away $200,000 to charity. (Donations are tax deductions, of course.) 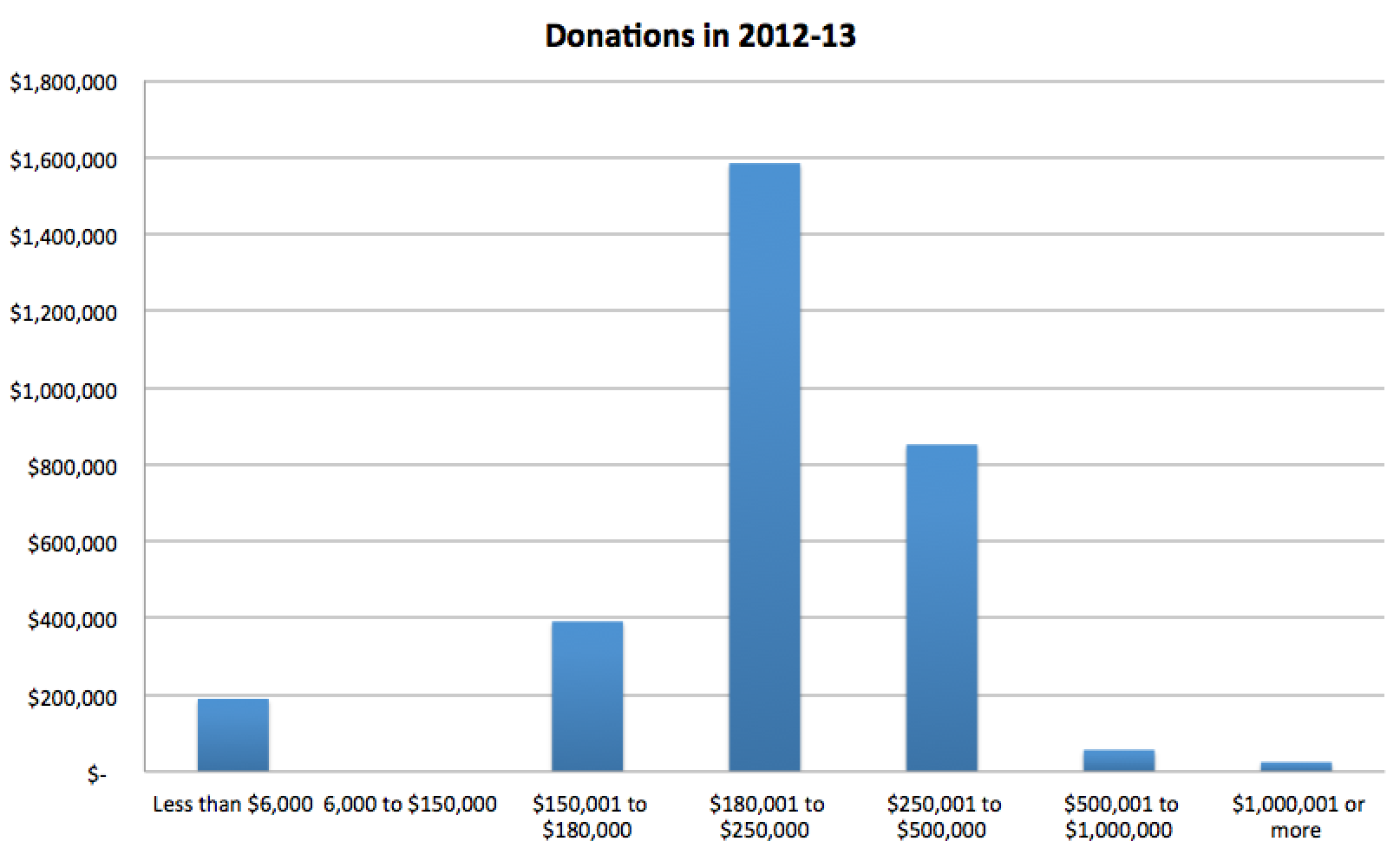 So the case for a Buffett tax is about managing the behaviour of the small proportion of millionaires who seem to be engaging in very vigorous tax minimisation.

These 55 people are — according to ATO data — not necessarily the highest-earning millionaires, but not the lowest-earning either. (NB. This only counts income the ATO knows about.) 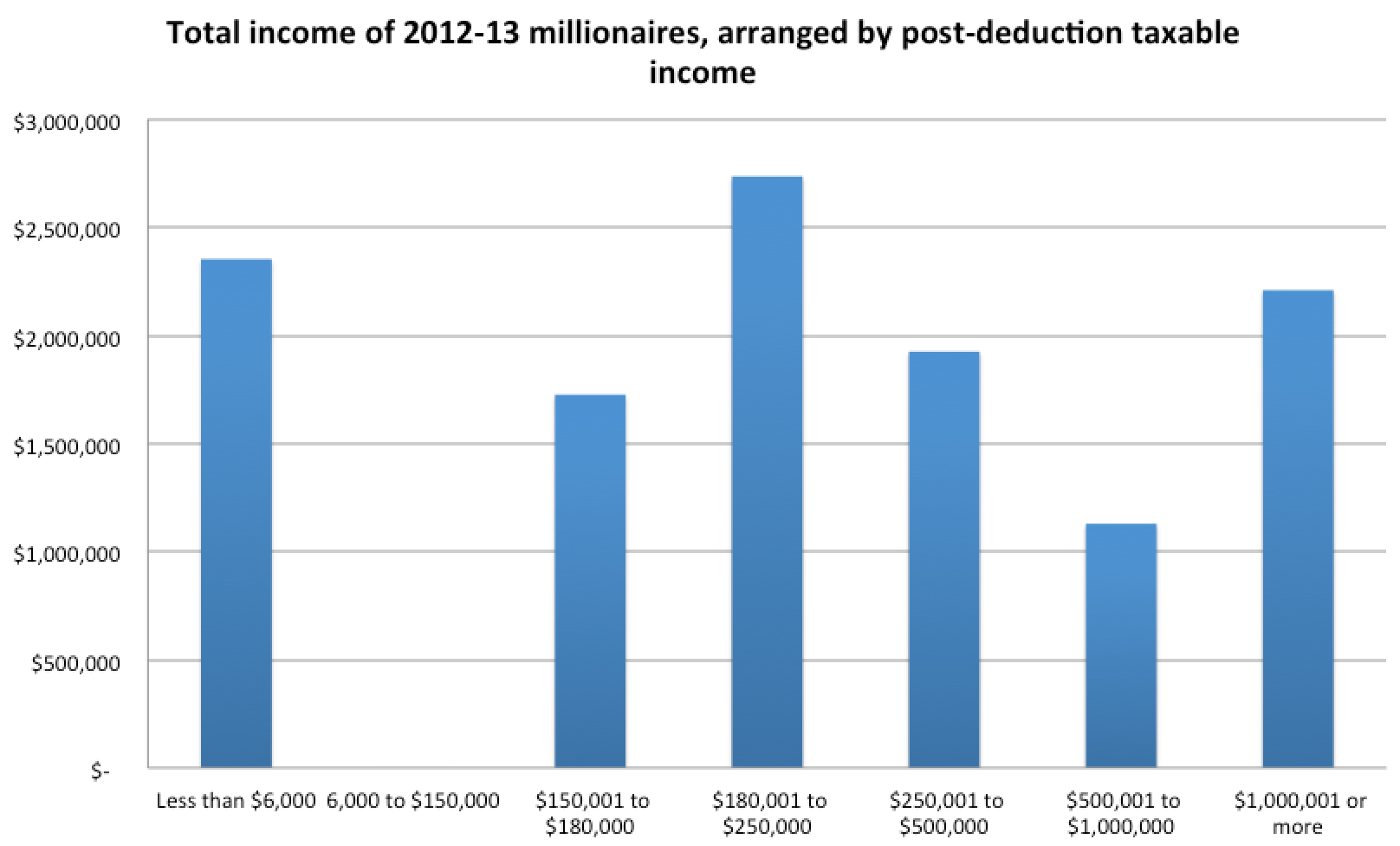 If those 55 people paid the same rate as the high-tax millionaires — 43% — it’d raise about $55 million, an important tweak, although not enough to solve our fiscal woes.

The Australia Institute has argued for a more aggressive Buffett tax, applying a flat 35% rate to income earners over $300,000, and has modelling that shows it would raise $2.5 billion a year.

Such a policy would be very tough to get through and can be seen as an ambit claim to start negotiations. It would clamp down on tax deductions so hard that it might prevent charitable donations, for example.

A further upside would be in raising confidence in the tax system. The rest of us declare our income and pay our taxes while feeling like many others don’t. That hurts.

If we know everyone is paying, tax time gets a little easier and tax feels less unfair. A Buffett rule could change attitudes to tax nationwide.

None of this is proof of rorting – or anything for that matter. It is just a series of guesses, hunches, and frankly ignorance of the law, tax, accounting, etc.

Tax is only payable on income – it isn’t paid on “income before deductions” (that is irrelevant) and it’s the first major error every commentator, including the ALP, on the matter falls for. Commentators such as yourself confuse revenue or receipts with income, which is the net profit or loss after deducting all applicable expenses and offsets.

This whole “Buffet” tax is a dumb idea.

I love the “if we can’t 100% fix something there is no point even trying” attitude.

If we can’t prove every tax-free millionaire is rorting the system, we shouldn’t take any action against any of them.

If we can’t close every potential avoidance loophole, there is no point closing any of them.

If we can’t single-handedly affect the climate on our own as a country, there is no point participating in any carbon reduction schemes.

If we can’t prevent or punish all crime, there is no point in having a police force.

Gets a bit silly by that stage.

That’s a million dollars of income, seriously, not revenue. Just reading the report will indicate that there is a problem, even if it rightly points out that the writer is not sure exactly what the problem is.

If it is income, this is what they received after deductions from their businesses etc. So the applicable tax laws aren’t about corporate tax, this is income tax, a much different beast.

How do you rack up $1M in deductions in a given year unless the tax system is stuffed?

Perhaps they are putting all their money into a political party, quite possible, but then the question is why do we allow tax deductible donations to political parties.

The question that should be generated from these observations is ‘what is so drastically wrong with our tax system that allows this to happen?’

You can then ask the same question of multi-national tax dodgers etc, all the way up and down the line.

The best tax system is a supremely simple one. Perhaps a revenue/income tax set at very low rates with no deductions is the best. The current legislation has to be about the worst possible outcome.

A couple of decades ago I was seconded to the ATO. The word there was that when a person is self-employed the payment of income tax is entirely optional.

As income increases the availability of non-tax options increases as well.

If our society is to continue in a peaceful manner then tax fairness must be managed.

Not to go all F. Scott FitzG but the rich are different which is why they remain so.
And what is the defining characteristic of the rich – spending.
Ergo, an extra GST especially for them and their high cost tastes – hell, they might even wear it as a badge of honour, as in Japan which publishes each year the highest tax payers from they gain much social kudo.