Brandis persona non grata at Helpmanns ... Christopher Pyne boots us from his party ... Nats for McGowan? ...

No win for Brandis at the Helpmanns Australia’s performing arts awards, the Helpmanns, are not exactly known as a platform for political statements, but Federal Arts Minister George Brandis’ plans to strip funding from the Australia Council came under (indirect) fire at last night’s ceremony. Firstly NSW Arts Minister and Deputy Premier Troy Grant kicked off his speech by noting that he was happy to be at the Helpmanns as the arts minister who hadn’t cut funding. Then the president of Live Performance Australia, Andrew Kay, delivered a passionate speech in defence of the small-to-medium arts sector, which was met with hearty applause from the 2000-strong crowd, after which Brandis commented “I feel like I’ve been to a sermon”. Comedian Denise Scott also remarked that when she kicked off her comedy career it was with a clown performing arts organisation in Albury-Wodonga in the early ’80s, which was fully funded by the government. She wondered aloud what Alan Jones would do with such a story nowadays.

Brandis was in attendance and this morning told Michael Cathcart on Radio National’s Books and Arts that many people “interested” in his new National Program for Excellence in the Arts had approached him at the after party, which is funny as one tipster tells us that although Brandis did attend the VIP party and was more genial than in previous years, he wasn’t anywhere near the actual performers. Our friends at the Daily Review have a wrap-up of the biggest talking points from the ceremony.

Party poopers. Education Minister Christopher Pyne is everywhere this week promoting his memoir, Letter to My Children, including a fluffy interview last night on 7:30. He is also due to be launching the book on Friday night in Melbourne with Prime Minister Tony Abbott, in a swanky event hosted by the Menzies Centre. Crikey staff had booked tickets to the auspicious occasion, hoping to nab a signed copy from the Fixer himself. But after booking tickets a week ago, we were told today that as the event had sold out, and our tickets were void. Is that really the case? We in the bunker were so looking forward to it, but maybe we aren’t conservative enough.

The definition of irony. What do you do when you’re known as a fraudster who faked your own death after owing creditors lots of money? Send out a press release about how your life is back on track and you want a job, of course. Dene Broadbelt, a young DJ in regional cities across the country, faked his own death this year after a string of aliases and debts were revealed. In a release yesterday titled “Too Good to be true” (odd capitalisation his), he announced:

“Dene Broadbelt is going to repay every single one of his debts. He is writing a book, releasing a documentary, and seeking fulltime, professional employment. Book profits will go entirely toward repayments and charity. He has become a staunch anti- bullying advocate and is volunteering his time at schools to raise awareness. He has been invited to guest speak at The World’s Largest Water Balloon Fight in Melbourne, January, 2016.”

Broadbelt also quotes his mother on how he’s turned his life around. We know young kids these days are entrepreneurial, but surely this is too far?

Small town, huge rivalry. Who would have thought that so much controversy could come from a rural electorate like Indi in Victoria? It’s been reported that local Liberals are not at all pleased with Nationals Senator Bridget McKenzie and prominent Nat Marty Corboy after McKenzie posted this photo with independent MP Cathy McGowan last week. Some high-profile Nats supported McGowan in her bid to oust Sophie Mirabella in 2013, and conservatives in the electorate are sensitive to any sign of allegiance before the next election. 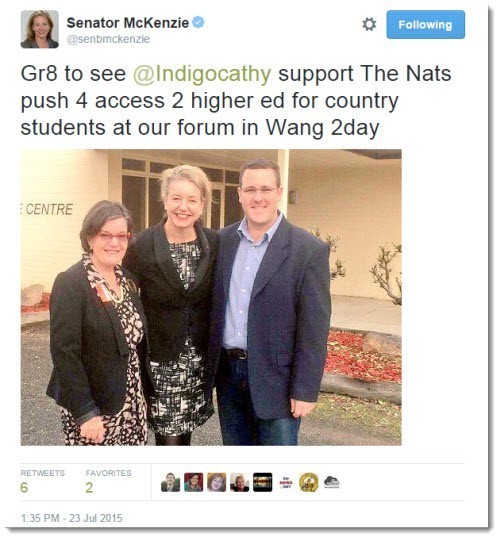 The Nats are still yet to announce their own candidate, with some saying they aren’t serious about making the seat a three-corner battle as part of a long-term strategy to take the seat when McGowan retires, while others are determined to make it a real race.

Not a Prada backpack. Following our tip yesterday on Bronwyn “1C” Bishop — known for her preferred seat in business class among flight attendants — the particulars of the Speaker’s flying habits keep coming. We also hear that Bishop’s bag must be hung up, not stowed in the overhead bin, as she will not risk the handles of her Mimco bag being damaged.

Ticket to ride. This sign was spotted in Melbourne yesterday for a new bus route. We could make jokes about the city’s public transport failures, but this does it for us. 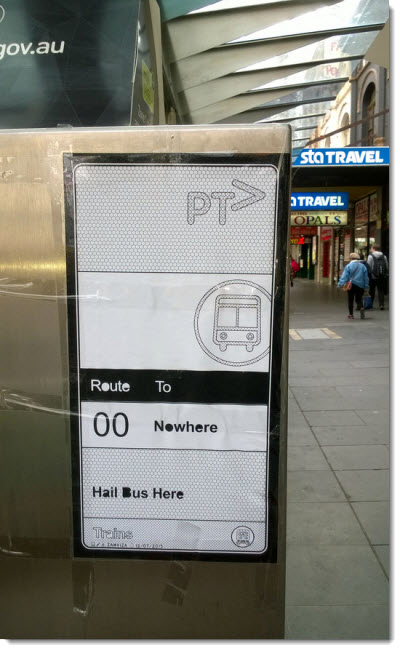 It burns. The Daily Beast today published accusations by Ivana Trump that she had been raped by Republican presidential candidate Donald Trump during their marriage. The article quotes Trump lawyer Michael Cohen at length as Cohen threatens the journalist and publication: “I will come after your Daily Beast and everybody else that you possibly know”. The threats are numerous, but aren’t quite up to the standard of insults from billionaire Trump himself, from which Time magazine has created an insult generator. 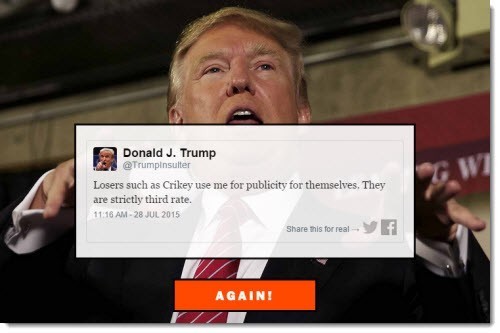 Watching for the rural revolution in Farrer