Rundle: why Clinton needs Sanders to split the Republicans

In the desert of the real, the spectacle is all. And what a spectacle the race for US president is already turning out to be. 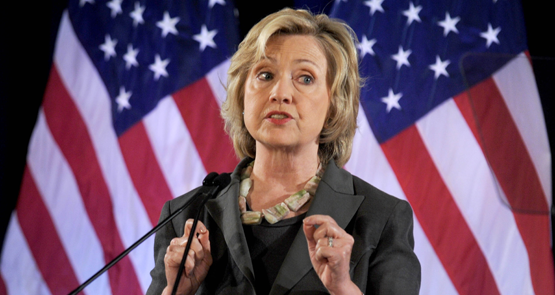 To paraphrase libertarian philosopher John Anderson, it is never right to start an article with a quote from The Onion, but it is sometimes necessary. “Hillary to America: Don’t Fuck This Up For Me” was the unimprovable observation of said publication when H. Clinton announced her candidacy some months ago — after spending the previous months criss-crossing the country on a “book tour” in a behemoth bus with her face printed across the side of it.

Since then, it’s been a grim processional, as Clinton’s act as heir-presumptive to the Democratic nomination has been performed from coast to coast. Her candidacy is tormenting but compelling for those who want to see a third Democratic victory nailed down. She represents both the triumph of the Clinton outfit — a machine within a machine — yet also the long-delayed accession of a female president. She is both foreign policy hawkish and neoliberal domestically — yet also further to the left than any Democrat could have hoped for a decade ago, before Katrina and Iraq and the crash and Obama changed the settings somewhat.

Above all, she represents a bittersweet triumph of the second-wave feminist revolution — someone straight out of that rising, who is nevertheless coming in on her husband’s coat-tails. As I noted a ways back, a Hillary Clinton presidency is not the same as a third Bush presidency. A wife is not a son. Nevertheless, it is not unlike it, either. Had the second feminist wave come in earlier or faster, Hillary Rodham might have gone far on her account, and she was unquestionably a big part of Bill Clinton’s success. Whether she would have had the skills, temperament or other qualities necessary to get to the Senate, much less the White House is unknowable, but there’s no doubt it would have been a much tougher trip, even to the middle, let alone the top.

Across the vast network of progressive organisations there has been a degree of agonising. That has only been exacerbated by the entry into the race of Bernie Sanders, the 70-something senator from Vermont, campaigning to the left of Clinton. And he’s not merely to the left within the party — Sanders is not a member of the Democrats at all, but an independent who caucuses with them, and a self-described “socialist”. By that phrase he means, in our terms, a social-democrat — he does not want to nationalise the 120 largest companies (sadly). He simply means that he supports a universal public health system, affordable college tuition, trade union recognition in the workplace, and Keynesian investment in infrastructure, etc, etc. White-haired and balding, stooped a little, usually in a cheap suit, he has a baying Brooklyn accent, and began his political career as one of the thousands of activists from the Jewish community who threw themselves into the civil rights struggle in the early 1960s.

By the late 1960s he’d done the full Alice’s Restaurant trip, winding up in Vermont as part of the alternative urban exodus, composed of hippies, utopians and anti-war activists. In the early 1980s, he became mayor of Burlington, Vermont’s largest city, then congressman for the whole state, and then one of its two senators. Much of his activity was solid centre-left state boosterism, ensuring that Burlington wasn’t hollowed out like many other US cities, and working with the state’s solidly left-shifted administration to develop things like a universal healthcare system (Green Mountain Care). Yet he’s also a supporter of some of the state’s more libertarian tendencies, such as a commitment to gun rights.

Sanders hesitated about entering the race for months — principally because there was a chance that Elizabeth Warren, the one-time financial regulator who became a Massachusetts senator in 2013. Warren is a hero to millions for going up against Wall Street. She ruled herself out repeatedly, and it was only when people believed her that Sanders stepped up. His candidacy had an immediate effect: Clinton moved quickly to the left, as Sanders tapped a deep current of anger and frustration over the smooth and remorseless rise of inequality, and the leaching of hope for a substantially transformed American society.

Sanders’ leftward pull has had people comparing the struggle to that which is currently occurring on the right, as the Donald Trump candidacy pulls the party in a populist direction. But they couldn’t be more different. The Republican Party is currently a circus taking place in the headquarters of a cult, a series of magical proposals to wounded heartland pride, advancing the hope that a society with yet lower taxes and investment will somehow magically turn into the society of opportunity it was in the postwar period of high taxes and substantial public investment. Clinton and Sanders are centre and centre-left dimensions of the party, duking it out in a rational fashion.

In foreign affairs, that division comes down to one between Clinton’s neo-hawkish rhetoric — as a way of differentiating herself from Obama, and out of real political difference — as regards involvement and intervention abroad, and Sanders’ belief in non-intervention. Domestically, it’s around a free-trade rematch — after the NAFTA signing of Clinton I, the Democratic centre, including Obama, has been wholly committed to forcing through the TTIP, TPP and other protocols, which are really a building out of the GATT/WTO/NAFTA deals of the ’90s. Base opposition to these deals is proving a headache for both parties.

However, it may well be worse for the Republicans, and that is where the complex nature of Sanders’ candidacy comes in. For though it appears to undermine Hillary’s procession, that’s absolutely necessary if the Democrats are to have any media attention from now and into the primary season over January to March and beyond next year. A coronation would be disastrous for Hillary. A leftward move, economically, to accommodate Sanders’ supporters would, by contrast, be a potential bonus since there are a whole slice of voters who would enthusiastically support both Trump and Sanders. (Don’t think about it, you’ll just get a headache.) Once Trump gets dumped and an establishment Republican is selected — Bush, Scott Walker or John Kasich — those voters might be siphoned to the Democrats, if they have burnished their economically nationalist credentials.

Mind you, you can have too much of a good thing. The rub for the Democrats is that the two first contests are Iowa and New Hampshire — the former a caucus state winnable by outsider candidates, and the latter practically a twin to Vermont. New Hampshire is more straightforward libertarian, but it remains a liberal, reasonable state, and hometown loyalty may get Sanders across the line. A recent poll has him trailing Hillary, 55% to 27%, nationwide, but by only about eight points in New Hampshire — a gap easy enough to close. Hillary would then go on to win South Carolina, Nevada and Florida, and be well on her way — but with some early damage done. She may need that cross-party support, as questions about her use of a private email server for government business during her years as secretary of state mount, and should Vice-President Joe Biden mount a challenge from the right.

That is, of course, the tenor of American liberalism. Sanders, a half-century veteran of civil rights struggles, is now being assailed because he didn’t parrot the phrase “black lives matter” on demand. In the desert of the real, the spectacle is all. It is never right to split the party, but it is sometimes necessary, and there is infinite capacity to fuck this up.

Rundle: a party foul as Trump supporters watch their hero fall off a cliff

Rundle: Clinton, Trump both head west for third debate — but only one of them is going south

Trump is a friend of the Clintons. Trump will not get the Republican nomination. I expect he will run a as a 3rd party candidate, split the Republicans and deliver the presidency to his friend Hillary. But, there are no conspiracies! So if it does happen, it was all a coincidence and no one could have predicted it.