Razer: at least the ALP fucks up in plain sight

Say what you will about the Labor Party, it is certainly committed to "openness". 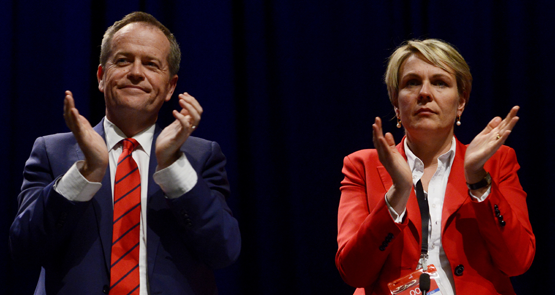 If there is a national institution more popularly misunderstood than the Australian Labor Party, its constitution must be written in code. But the ALP’s constitution is written in plain English, and its “codes” can be easily broken. National conference, a (usually) triennial event that took place in Melbourne this past weekend, is a cipher and tells us what we should already know: the ALP is far less a party of “faceless men” and backroom deals than any other. It’s a party that, both formally and informally, embraces the opportunity to publicly fuck up.

National president Mark Butler, a decent emcee and one yet to spectacularly fuck up on a reckless Rudd-Gillard scale, used his opening remarks to remind delegates and observers that the ALP had its tiffs out in the open. The Greens have their conference behind closed doors. The Libs have theirs behind a screen of big hair, blue ties and US-style convention choreography. Labor may have abandoned many of the values written in ink in 1921, but what it hasn’t left behind is the habit of open debate and amateur theatrics.

I have seen secondary school productions of Pippin more stage-managed and contained. If the ALP has a terrible secret, it’s not making any real effort at dramatic disguise.

All weekend, news media report on the deals done in private and the false consensus displayed on the floor. They shrug off Butler’s claims that this will be an unrehearsed weekend of wrestling and proceed with the old Mafioso lore. The ALP is shadowy! The ALP is at pains to conceal its “true nature” — which, depending on where you sit politically, is either a misogynist First World racist or a cold Stalinist heart.

That media can continue to hint at their own excellence in revealing the “real” ALP is curious. Particularly when they do so from a room less protected by security than the Quilt and Craft Fair unfolding its own patchwork in the adjacent building. My friend, who has no media accreditation and is visiting only as an observer from his sub branch, wanders in to the media centre to find me. “Are you ready for lunch, Helen?” he asks, while a shadow cabinet minister is backgrounding journalists on one of the electoral era’s most divisive and sensitive matters. No one stops him. We decide on the Cantonese food “powerful”, “faceless” numbers men are reputed to traditionally enjoy.

That there are relatively few accurate reports on the contentious chapter 9 debate on asylum seeker policy is also curious. Stuffed with Richo-style menu items, I am not comfortable sitting in the conference room but I am compelled by speeches delivered by MP Andrew Giles and unionist Michelle O’Neill. Speaking for amendments that would oppose turnbacks, end the cruel onshore torture of temporary protection visas, increase humanitarian intake and close offshore detention facilities independently deemed unsafe, these two don’t turn the right vote around, but they should turn around the view that the ALP is shadowy. These are good speakers who are not, by any stretch, “performing” debate. They are genuinely having it before a delegation votes.

As Giles begins to speak, one group of protesters storms the stage and another bursts in behind me. A group of white men with Skip Australian accents let fly with some of the feeblest swearing I’ve heard in a nation otherwise gifted in this art. “You fucking dog cunt traitor racist cunt”, they say to a man who will go on to passionately argue, as they presumably are, that on-water operations are inherently unsafe. A woman behind me in a Labor for Refugees shirt says “SHOOSH HE’S ON YOUR SIDE” and as this possibly well-meaning but certainly stump dumb group of protesters do their bit to swing any undecided votes in the turnback direction, the woman begins to sob. “We worked so hard to consult on the amendments. We have worked so hard for the numbers. And now, these little pricks are working against what both of us want.” She hugs me and I say “There, there” while I check with the hand that is not cradling her head for social media responses from the room. “That feeling when a white male yells you’re a racist and you’re a person of colour who supports the Labor Party” is one of the downcast tweets posted in those moments to #ALPConf2015.

That night, SBS news cuts the footage so that it looks like the crowd is applauding the protesters. The next day, Andrew Bolt spins the story so that it seems like an extreme left with white-boy dreadlocks rules the party. A representative from BuzzFeed tattles on the minimum wage workers who admitted the protesters. Both liberal and illiberal commentators make these protesters appear welcome or tolerated and not, as they were, disdained on both sides of the vote for different reasons. No one much seems to notice that the ALP really is critically unable, if not unwilling, to stifle internal debate.

The “real” ALP shows itself time and again all weekend, but media don’t want to look. There is no truth so abstruse than anyone can be bothered employing security to protect it and, in many cases, there are amendments so divisive that party members can be bothered to fight. While I’m certain that the least indolent members of the press gallery have access and insight into true backroom deals that far exceed mine, I also know what I saw and heard. And that is, at every visible level, open and unafraid and sometimes ill-advised dissent.

I see Paddy Crumlin of the Maritime Union let fly with some nationalistic swearing on the conference stage. At the Fringe discussion, I see a notable academic insist Labor for Refugees change its wording on an LGBTI motion that would be delivered for passing the following afternoon. I’m legally blind, and I have one ear occupied by News Radio commentary. Neither of these impediments worked to falsely reveal a party that tries to keep secrets through theatrics.

Labor is an ineluctably, sometimes dangerously open party and if it weren’t it would no longer be Labor. But, in the view of most commentators, Labor either has its doors too wide open or not open enough. It has long been the case that Labor just can’t win with media. But with Bill Shorten, it’s probably also true that Labor can’t win with the electorate.