Enormous numbers of infringement notices for speeding are issued each year. More than three quarters are for relatively low level offences yet the level of fines is punitive for ordinary households 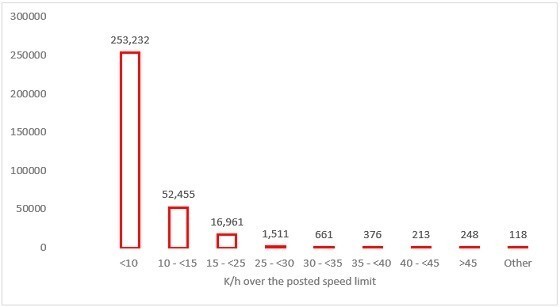 I know someone in Melbourne who got a $189 speeding fine plus the loss of one demerit point the other day for driving at 68 km/h in a 60 km zone; that’s the penalty for exceeding the posted limit by up to 10 km/h. If she’d been travelling 2 km/h faster, the fine would have been around $300.

She could cover it from savings, but for many other households that’s serious money. It’s easily enough to upset a finely balanced budget.

For someone on a very low income it’s a disaster, especially if they get a couple in the same year, or worse. Others in the same household might well suffer as already stretched expenditure priorities are rearranged.

The number of speeding fines issued in Australia each year is mind-boggling. And this is an issue, generally, that News Corp columnist Miranda Devine has obsessed over for years (see here, here and here).

Just in Victoria, 325,775 speeding offences were caught by fixed and mobile cameras in the three months to March this year. That’s equivalent to 1.3 million tickets a year.

What really surprises me though is that 77% of those tickets — or around 1 million per year — were for the lower level offence of exceeding the posted limit by less than 10 km/h.

Those numbers are extraordinary. Either a huge proportion of Victorian drivers have little regard for the letter of the law, or it’s very hard for many of them to stay within the posted limit, at least in locations where speed cameras are placed.

There are two standard narratives here. One is that speed cameras are a racket to raise revenue; the Victorian government receives more than $750 million a year from traffic fines, according to this report. The other is that cameras are a safety device; they’re about saving lives and reducing serious injury. There were 253 fatalities on Victoria’s roads in the 12 months to May this year, and 5915 acute hospital admissions in 2014; the theory is there’d have been many more without cameras.

That’s a debate I’m not going to get into at this time; my interest here is in the severity of penalties for low-level offences, i.e. within 10 km/h of the posted limit in a 60/100/110 zone.

I suspect few drivers have the concentration necessary to drive no faster than the speed limit (plus tolerance margin) at all times. I think most intuitively feel they know what’s safe and reasonable.

They set their speed unconsciously by taking in cues like the width of the road, sight lines, and the speed of other traffic. They can easily be lulled into driving at 68 km/h in a 60 km/h zone if (say) it’s a four-lane road lined with low buildings or a park.

Most drivers will inadvertently drift a little above the legal limit from time to time. To the extent any measure will affect their behaviour, increasing the probability of detection — as cameras have done — is likely to be a far more effective deterrent than imposing a draconian financial penalty.

The problem is fines for low-level offences are simply too onerous for many people. I suspect they’re unnecessarily onerous, too; they don’t make much difference to behavior (although I note the police think they do).

I think governments should examine lowering fines for these sorts of offences, say to $100. For repeated infringements, offenders might be given the option of attending a class in driving responsibly rather than paying a larger fine.

Both of those suggestions would be expensive for government. But the safety and amenity of roads ought to be a high priority. Moreover, decisions on the management of road safety should not be directly influenced by revenue policy.

Others might be able to suggest further options that don’t have such a harsh impact on the finances of ordinary and lower-income households.

As someone who cycles regularly on roads, I have a serious interest in driver behaviour, but I don’t think the size of fines for low-level speeding offences is doing much to enhance my safety.

In fact, by giving the impression that governments are acting firmly and decisively, I wonder if it distracts attention from the actions that would really make cycling safer. They cost money though, and they don’t make it.