Bishop to the back of the plane. The flying habits of Bronwyn Bishop have garnered many headlines recently, informing us of the Speaker’s preference for helicopters and chartered flights to party fundraisers. On Friday Fairfax reported that when Bishop can’t secure personal transport, she flies on a standard flight to the front row of business class. Former flight attendant Clayton Long told Adam Gartrell that a flight was once delayed because Bishop didn’t get her seat. We hear from another tipster that the preference for a particular seat was well known among Qantas staff “[she] is known as ‘1 C’ [One C] at Qantas as this is the seat she wants every time she travels. If anyone else has booked it, she will have a temper tantrum at check in — or on the flight.” Our tipster tells us “businessmen have given up seat 1C just because they want to get going and are embarrassed by the whole situation”. We asked a spokesperson for the speaker if 1C was her preferred seat and were told “she takes whatever seat she’s given. In fact we were in row 3 last week”. Our tipster said Bishop was also known for placing her feet on the bulkhead of the plane. Crikey was also told Philip Ruddock often travels with her to have a “calming influence” on the tantrums, a claim Ruddock’s spokesperson denied. Looks like this story has still got quite a bit of tailwind.

A bullet plane? A caller to 3AW this morning said that a politician and his son had been detained at an airport recently after a trip to south-east Asia for carrying live ammunition. Who could it be? If you know more, fill us in.

Conference whispers. General secretary of NSW Labor Jamie Clements made waves on Saturday at the ALP National Conference by using a motion on promoting sport to have a go at the fine sport of AFL, calling it “chaos” and “aerial ping pong”. He told delegates that rugby league was a “good Labor sport”. While we found the comments outrageous, we have a feeling that’s not what prompted this tweet and a few others from Emily’s List yesterday. During the debate yesterday afternoon the tweets were criticised on the floor — but they are still there today. 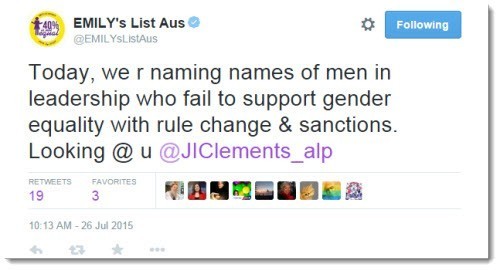 ScoMo, child star. Attendees at this weekend’s ALP National Conference also had the opportunity to get their needlework in order, with the Craft and Quilt Fair taking place at the Melbourne Convention Centre throughout the weekend as well. This gave attendees the option of experiencing a more calming art than what was on display next door, but the Craft Fair was also giving away copies of the Australian Women’s Weekly, which Ms Tips was grateful for at the end of a long weekend. The August edition features a six-page spread on Social Services Minister Scott Morrison by Helen McCabe, detailing his Christian faith and struggle to father children. It also includes this gem, which will have us raking the archives of Vick’s VapoRub commercials:

“Scott was a dutiful son. He played rugby, rowed and participated in his parents’ amateur theatre group. He even had an agent as a young boy and was in a few TV commericals, such as a high-profile campaign for Vicks Vaporub. He also did voiceovers and sang, but denies he is any good these days.”

Morrison also admits that he’s been drunk “at least once”, and his wife, Jenny, reveals that he has a preference for tunes of Tina Arena. A man of fine taste.

Blair v Eltham. News Corp columnist Tim Blair has decided to take aim at Crikey‘s Ben Eltham again today, this time dedicating a whole column to him and referring to him as “a tax-funded art enthusiast”. Unfortunately the piece doesn’t appear online, so you’ll have to buy the paper to read Blair rail against “Eltham’s Army”, which sounds like quite a bit of fun. Eltham said this morning: “I am pleased that Tim Blair has taken a break from his relentless sexist disparagement of female commentators to attack a fellow white man for a change.”

I reckon Effen-C is a more apt moniker for this nasty piece of work.

And we thought (from the Limited News selective tale-spin habit) that Rudd was a bad flyer?

Maybe some people learned to how to torture children from God.

I hear lots of pollie tit bits from my flight attendant friends – much better than taxi drivers.

She is definitely one ‘c’.