The Labor conference is all for show, of course. These decisions have been made long ago, behind closed doors. 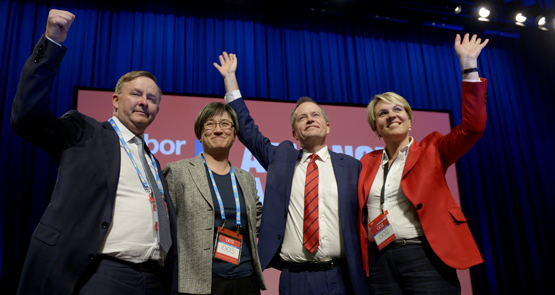 Beside Docklands, a once-trim vessel, now in a race between slow rot and loving restoration, was filled with excitable children in colourful costumes of a bygone era.

And as well as the ALP National Conference, the Polly Woodside was also open for visitors.

Haha, you see what I did?

Seriously though, great place for a conference about politics in 21st-century Australia. Between a casino and a disastrous spec-built extension of the city.

The Exhibition Centre, Jeff’s Shed as it was known for about a decade — name seems to be fading now — a great takedown in the Australian fashion. Jeff’s Shed.

The upsweeping portico, something Denton Corker Marshall put on all the buildings they did in the Kennett era. Pure coincidence they all look like a Hitler salute, I’m sure no comment was intended.

Where was the conference? Lumpy, badly dressed people everywhere. This must be it. I followed them in. Macrame and raffia work. Making something out of the thinnest of threads.

And as well as the ALP conference, there was the craft exhibition.

Haha, he said a little weakly. You see what I did?

In the conference hall proper, tacked onto the end of Jeff’s Shed, the thing was under way. Huge screens, broadcasting delegates speeches on this or that amendment.

“Amendment 43b, the nominator and seconder have waived their right to speak. Someone someone from the Amalgamated Frittlers …” “Chair, I rise to speak on this very important matter …”

None of the big guns here now. Living in retirement, dead, or Richo, who hovers between. Good thing Richo wasn’t here. I’d trekked across from the Crikey office, past the aquarium.

Richo would’ve wandered in, seen all the fish in tanks and think he’d found the world’s largest Chinese restaurant. “I’ll have the tiger shark with oyster sauce on a bed of everything else arggghhhh”. The whole conference would have been done right there.

As it was, it was done in a few rooms a few weeks and days ago. The script had been written, now was the three-day season.

The conference was, as umpteen speakers remarked upon, more open than others. True enough.

The Liberal conference isn’t open for the same reason that the Corleones and Gambinos didn’t sell observer passes to the 1957 upstate New York meeting of the five families.

The Greens have a conference that has some closed sessions (described by Andrew Probyn on Insiders as “like a secret society” — no, Andrew, it’s called a political party. It’s been so long since you saw it you don’t recognise one when you see it).

When a party conference is entirely open, you know that nothing is really happening there. Indeed the desire to have some sort of entirely open thing renders the conference hopeless as a way of thrashing out policy.

All the more so in the boats debate, which came up on Saturday afternoon. The fix was in, we all knew what the vote was going to be. The right would win, the left was bought off with increased regularised refugee immigration.

In the meantime, we got a bunch of speeches. And fair enough, this was the party speaking to itself. Before we really got started, there was a demo of sorts, with half-a-dozen protesters taking the stage and unrolling a banner — in some hipster serif font WHAT’S WRONG WITH HELVETICA! — protesting turnbacks. It took them three goes to get it the right way up, and security seemed to be giving them time to do it.

Not slick, but kudos for doing it.

We then endured another 10 minutes of the ALP congratulating themselves for how open they were, etc, etc.

The speeches resumed. Tony Burke’s was the killer.

“Thirty-three is my number. That’s the number of people who drowned on my watch as immigration minister. I looked at the list and there were ages only, and I noticed the youngest was 10 weeks old. And I rang up and said, ‘Can you give me the name?’ and they said ‘Oh, we can’t use the name in the media yet …'”

The hall was still. Burke’s voice went to righteous irritation.

“And I said, ‘Look, can you just give me the name, I’m not going to give it to the media’, and they gave me the name,” he said, in a clip that played across all media incessantly.

All this stuff was for performance, of course. The idea that this conference was a brave commitment to openness was the greatest sell of all.

No one will be selling tickets to the meetings where the decisions are really made. The mainstream press is complicit in this openness nonsense, partly because they are easily gulled, and partly to keep themselves on the inside.

You want a truly open conference? Free your delegates from factional control, and have some floor fights. That would get people interested.

Not that I’m suggesting a conference should be open. That seems to me to be a product of the mania of the age — that no one can have a viable collective organisation with boundaries, that everything should be an open network.

Once the network is opened, however, power simply flows to an inner conspiracy. Which is why poor old Albo had to ‘fess up last week that powerless Bill hadn’t consulted him about the towbacks announcement.

Would a closed conference with released delegates be able to thrash out a better way to handle it?

For Labor, there is no better way now. They’ve got onto a path in which they can only imitate the Liberals in efficient bastardry.

Trouble is, why hire the imitation bastard, the one who’s faking it, when the genuine bastards are still on offer?

Labor will hope that a concession on towbacks will be enough for that — possibly very small — section of the electorate for whom this really matters, to be satisfied with the answer.

And they can get back onto the economy, and crush the Libs in a first-term defeat.

The Greens will be hoping to harvest yet more votes from this, but they may be disappointed. There may be, quietly, a turnback on turnbacks, from sections of the electorate.

The anti-drowning argument is a powerful one, and the only other response — to increase patrols, co-operate with Indonesia in patrols in their waters — is a politically impossible get for non-Green parties.

Which was the theme of the conference.

Yes, yes, the fringe, all lively, and worth having. Launch of the Labor Herald with a terrible speech by No Electricity Bill. “I’ve got a headline for you …” Oh Jesus, here we go.

Australia Institute meeting, the poster done up like an old travelling show poster. Bit too accurate for the (standing room only, it must be said) slightly sad affair, post-PUP, Drs Denniss and Oquist’s travelling patent medicine emporium.

And finishing up with the same-sex marriage boondoggle with the 2019 cut-off, as if the issue were a slowly maturing shiraz, not ready to be uncorked yet.

Which seems to piss off everyone and gain nothing.

Haha, you see what they did?

On the way out I visited the aquarium. Scaly creatures suspended in an eternal present, going round in circ–

You see what I was going to do?

When even Guy Rundle struggles to come up with anything interesting, you know it truly *was* a dog of conference.
A weekend producing little more than anger, frustration and deep depression.

Australian Labor.. a shadow of its former self, with heavily scripted comments, focus-group tested policies, and for any of us with an IQ above room temperature they just come across as a bunch of smug bastards with their heads up their own asses.

A rather mean, picky and wholly negative view of the conference … without much substance … Less cynical view would be that there was honest and open debate … at the very least a whole lot more honest and open than the complete stage-managed conformity (“unity”) of LNP conferences … and that important issues wer framed and decided by an open vote …

A caller to ABC Bendigo last Thursday got the deaths-at-sea issue in one: ‘Many of these boat people come from such hell holes of poverty and persecution that if they can’t get to Australia then death at sea is attractive’.

But that thinking will go nowhere in a country that is fat, dumb and happy led by politicians dedicated to keeping things that way.