The Northern Territory is simply too valuable as a laboratory for the federal government's paternalistic social experiments. 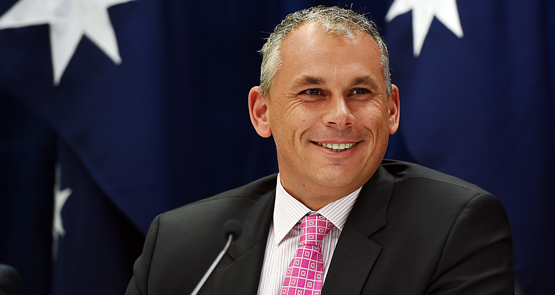 There isn’t much that I share with Treasurer Joe Hockey — apart from a generous girth — but my response to the announcement earlier this week by Northern Territory Chief Minister Adam Giles that the Council of Australian Governments meeting had endorsed his bid for NT statehood by 2018 matched Joe’s.

Joe was standing before a pack of snappers and scribblers, laughing like a drain. When I heard the news on the ABC, I laughed so hard that I nearly drove off the road into one.

Despite the hype following the Giles announcement, the COAG missive was a modest one-liner squeezed in at the fag end of the communique:

“Leaders also supported the Northern Territory Chief Minister’s resolve for the NT to become Australia’s seventh state by 1 July 2018. The Chief Minister will report on progress at the next meeting of COAG.”

Just in case you might believe this tosh, the NT will not be getting statehood by 2018, or anytime soon after.

Despite the confected outrage of statehood boosters like NT Legislative Assembly Speaker Kezia Purick, the NT not getting statehood is a very good thing.

As others have pointed out, it is blindingly obvious that the call for a renewed statehood push by Giles is the act of a desperate man looking down the very short barrel of political oblivion.

Space (and the sheer tedium of detailing the mess that the current crop of CLP politicians have made of a once-proud party) prevents a fuller exposition of the fate of what is, for mine, the worst NT government since the territory was granted self-government in 1978, but the odds are very long on Giles surviving as Chief Minister to Christmas. And if Giles goes, then the CLP will deservedly be condemned to the night-soil can of history.

It is an article of faith that every NT government makes the call for statehood — it would be distinctly “unTerritorian” not to do so. But enthusiasm for statehood can usually be measured by the resources and effort each government allocates to the issue, and this mob has not allocated a red cent of taxpayer’s readies to statehood. The last sustained effort — the awkwardly named “ntstate7” campaign run by Labor between 2005 and 2011 — was a squib, most likely poisoned by the hangover from the previous failed attempt in 1998 in the closing days of the CLP’s 27-year record run in power.

Putting aside constitutional and representational issues, there are at least three very good reasons why statehood should, to borrow the words of someone, be left to rot, “dead, buried and cremated”, as a bad idea whose time should never come soon.

The first of these is that states — even borderline basket cases like Tasmania and South Australia — should be able to pay their way. As I observed earlier this year, the NT isn’t within a clean-skin bull’s roar of financial independence:

“As [Nicolas] Rothwell notes, the tax-payers of the Australian south-east fork out around $4 billion a year to keep the NT running. Divide that number by the 220,000 people in the NT — about the population of your local shire council but without the productivity and contribution to GDP — and the figure is around $18,000 per head.”

On Friday last, the ever-acerbic Jack the Insider usefully noted in The Australian that the NT getting statehood:

“… would be akin to handing out cash and prizes for profound and abject administrative failure. And the big prize in this case would be immunity from Commonwealth oversight over spending what is substantially other Australians’ money.”

The second reason that the NT will not achieve statehood anytime soon is that, unless the process incorporates the legitimate expectations of Aboriginal residents — who make up about one-third of the NT population — any new statehood proposal would be doomed. Of the 2011 push for statehood, director of the Central Land Council David Ross said that:

“The Central Land Council isn’t interested in statehood until a Royal Commission is held into the expenditure of funds by successive Northern Territory governments on Indigenous affairs since self government in 1978. Numerous reports and studies have shown repeated mismanagement and rorting of funds that were supposed to be spent on addressing Aboriginal disadvantage but were not.”

“There’s been nothing thus far that’s given any comfort to Aboriginal people in the NT that the Northern Territory is a state that can do the right thing for Aboriginal Territorians.”

The third, and for mine the most compelling reason why the NT will never achieve statehood in my lifetime, is that the NT provides the Commonwealth with a social-engineering laboratory par excellence.

There are myriad examples of far-reaching Commonwealth control and influence in the daily life of NT locals — think euthanasia, uranium, radioactive-waste disposal facilities and experiments with Aboriginal land, for a few — but the most egregious and long-lasting is the NT Intervention.

For many here, the Intervention has faded into history, but the legislation continues (with modifications) in application, and the mindset of many Commonwealth bureaucrats and politicians remains to a substantial degree as expressed by prime minister John Howard when asked why he imposed the Intervention on a polity that was, particularly in comparison to the current government, travelling relatively well.

The value of a social-engineering laboratory like the NT is not something a central government would surrender without good reason. It is only in the NT that experiments like the BasicsCard, which allows for the quarantining of welfare payments, can first be tested on a (relatively) hapless Aboriginal population for fine-tuning before being introduced for all welfare recipients.

Finally, there are serious questions about the commitment of the Giles government to statehood. Earlier this year, the current Minister for Statehood, Bess Price, was asked a straightforward question about her portfolio. As the ABC reported at the time, Price:

“Ms Price paused for 40 seconds and then said it was a complicated issue … She also confirmed there was no funding for statehood in the recent budget.”

As Jack the Insider said, “It’s no way to run a territory, let alone a state.”

*Bob Gosford is employed as a legal adviser at the Northern Land Council in Darwin.