Fairfax has apologised to Warren Mundine and removed articles improperly implying conflict of interest on his part. Plus other media tidbits of the day.

The articles alleged conflict of interest and improper dealings Mundine’s part — claims Fairfax now says it did “not intend to suggest”. A correction is carried on page 2 of today’s Sydney Morning Herald: 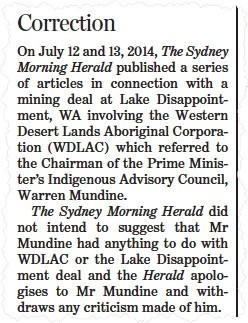 The articles, of which there were at least three over as many days, alleged improper distribution of mining wealth to the Martu, an indigenous people in Western Australia. The articles alleged that a company in which Mundine was a shareholder was involved in helping negotiate the unfair deal — but Fairfax has now backed away from that claim. The articles have all been removed from the Fairfax websites.

In a statement distributed to media, Mundine reiterated that he was “never involved in negotiations or discussions between Reward and WDLAC or the Martu people, either directly or behind the scenes, nor received any benefits in connection with those dealings.”

“Notwithstanding the apology and retraction, the harm done to me both personally and professionally by this episode can never be completely undone. I would have preferred not to have spent a year of my life living under the shadow of these allegations and a good part of that year working to reverse this injustice.”

It’s not clear if Fairfax paid any damages as a result of the settlement. The company declined to comment this morning. — Myriam Robin

Out with the old, in with the same? When Lachlan Murdoch left the Ten chairmanship following his call-up to News Corp last year, Hamish McLennan was made executive chairman of the network. It’s a bit of an odd position for corporate Australia, which prefers to split the positions, so it’s no surprise Ten has announced a leadership shakeup today. What is surprising is that McLennan, credited with a belated turnaround after years of stagnation, is leaving the network altogether.

In a statement to the sharemarket this morning, the network revealed non-executive director David Gordon had stepped into the chairmanship, while COO/CFO Paul Anderson, who was left out of the newspaper speculation on Ten’s next chief, stepping into the chief executive role, effective today. In a statement, McLennan credited Gordon with being key to his own success in recent years. Gordon said he would continue the network’s current strategy.

And in a late morning announcement, Foxtel (50% owned by News Corp and 50% owned by Telstra, announced a restructure of its own. The company said it was moving to a flatter organisational and management structure and CEO, Richard Freudenstein said that as a result, the chief operating officer role currently held by Rohan Lund was no longer required. — Myriam Robin and Glenn Dyer

A done deal? According to the Fairfax Media papers this morning, the Australian Competition and Consumer Commission has put “[the] Murdochs on notice over Foxtel grab for Ten”. Well, that might be the case, but with Foxtel and Ten already starting work on integrating the core part of the Ten network, its ad sales operation, into Foxtel-controlled Multi Channel Network, the horse has already bolted.

Under a deal announced two weeks ago (but not announced to the ASX, as it really should have been), the Ten sales team will be absorbed by MCN, which controls ad sales for most of the popular channels on Foxtel. Around 120 people from the Ten sales teams will move to MCN, 20 will remain at Ten and 10 are leaving. The new structure starts September 1, so it will be in place well before regulators decide on the deal.

“It is [ACCC chairman Rod] Sims’ first public commentary on the complex deal announced last month which will reshape the local media landscape through the sale of 15 per cent of free-to-air broadcaster Ten to Foxtel, whose Multi-Channel Network will take control of the network’s advertising sales. Ten will acquire 24.99 per cent of MCN.”

Well, the ACCC has just over a month to consider the Foxtel move on Ten (which will give Foxtel 14.9% of Ten) before the merger of the two ad sales operations takes effect. Once that happens, it will be very hard to unscramble the omelette (as the saying goes) without potentially damaging Ten’s revenue flow by forcing it to revert to a standalone sales business. That is no doubt why the integration was first up before the regulators had approved the deal. It will make the ACCC’s task harder. — Glenn Dyer

Twitter moves on copyright. In good news for those who are protective of a good pun, Twitter now seems to be taking action to remove plagiarised tweets. As The Verge reports, a number of tweets have been deleted on copyright grounds for stealing freelance writer Olga Lexell’s joke — Lexell says she filed a request with Twitter to have them removed. The stolen tweets now simply read: “This tweet has been withheld in response to a report from the copyright holder.” 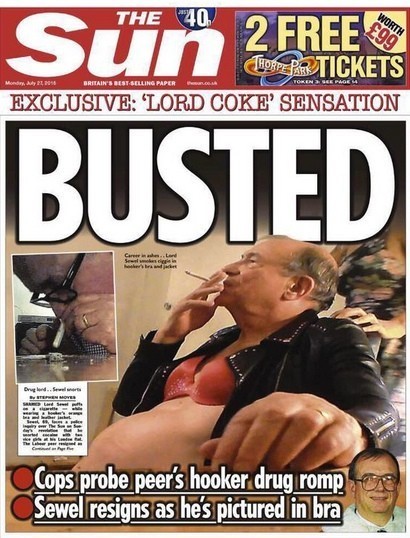