The Labor Party has finally committed to a binding vote on same-sex marriage. Eventually. 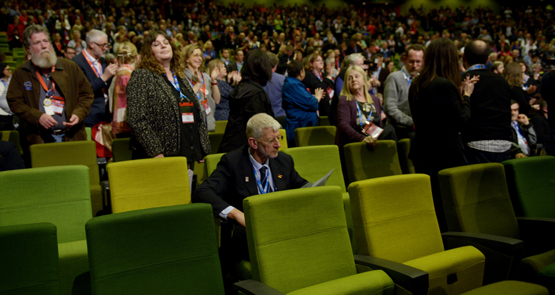 Labor Leader Bill Shorten faced a crucial test of his leadership at the ALP national conference on Sunday, staring down the barrel of a contentious same-sex marriage vote that could have unseated either him or his deputy, Tanya Plibersek. To address the thorny question while keeping the leadership secure, Labor did what it does best, and found a solution that pleased exactly no one.

By Sunday morning, NSW state MP Penny Sharpe and Pat O’Neill — Labor’s candidate for Brisbane, and the reason why current sitting member Teresa Gambaro is suddenly looking for a conscience vote in the Liberal Party — had put forward a motion committing Labor to a conscience vote on same-sex marriage until the next election, and then forcing all members into a binding vote for marriage equality thereafter.

Shorten did not support the motion, instead preferring to commit Labor only to a conscience vote in perpetuity. The conference was almost evenly split between the left and the right. Of the 397 delegates, 196 were left-aligned, and 197 were right-aligned, with four independent.

Shorten’s office was sure he had the numbers to defeat Sharpe and O’Neill’s motion early Sunday morning when he stepped out and told the conference that marriage could be legislated in the lifetime of the current Parliament if the Coalition were to extend a conscience vote to its members while also allowing Labor members a conscience vote.

But the numbers were wrong, and when his office realised this, Shorten began pushing back on the unions to support him. It became a live-or-die issue for Shorten by 2pm, when the left had bound its voting bloc for the motion. Then the Labor Right also bound to vote against a binding vote.

By 3pm, the left was incredibly confident it had the numbers, but it all shifted in the matter of minutes. Pressure mounted on those from the left in the leadership team, particularly Senator Penny Wong and Deputy Leader Tanya Plibersek. If no compromise were reached, either Shorten or Plibersek would have had to go.

So a compromise was reached, with a Shorten-Plibersek motion that would allow Labor members to vote their consciences until the 46th parliament began — or notionally 2019 — and a promise to bring in a marriage equality bill in the first 100 days of a Shorten Labor government. This was something also promised by Rudd in the 2013 election.

The Labor left could have held strong and pushed for the original motion, but once the leadership team put a position, it was inevitable that the numbers would likely weaken.

Around 4pm, those most opposed to same-sex marriage within the party, mainly the Catholic right in the shoppies’ union — Don Farrell and Joe de Bruyn — were pulled into Shorten’s office and given the news. Although the right was winning, de Bruyn and Farrell were said to be ashen-faced when leaving the meeting. This was it: by 2019, like it or not, Labor will force its members to vote for marriage equality.

Meanwhile, those on the floor watching the public motions being debated were treated to extended speeches on aged care.

Before returning to the conference floor for the final motion, Shorten, Plibersek, Wong and Anthony Albanese addressed Rainbow Labor members over the compromise motion in what was said to be a very emotional event. The leadership team took criticism and answered questions about the motion from visibly upset members unhappy with the compromise.

When it came time to put the motion to a vote, there were short speeches from Shorten and Plibersek, but the conference delegates gave the last of their remaining conference energy to Penny Wong. After receiving a standing ovation — from most in attendance, but noticeably not de Bruyn — Wong gave a tearful rallying call for the party. She said the motion achieved an eventual binding vote, and called on those within the Liberal Party to be “truly liberal” and support a vote for same-sex marriage.

“Because there is nothing to fear from equality,” she said.

The motion was passed in the end on voices alone, and the 2015 ALP national conference came to an end with Shorten’s leadership said to be strengthened by not being defeated on any motion.

It’s expected that by 2019, marriage equality will be passed into law, and the binding vote will only be used to stop legislation against it from far-right MPs or senators from outside the Labor Party.

Of course, between now and 2019, there is another national conference during which this motion could again be debated, and the right could push back, but if the expression on de Bruyn’s face on the final night of conference is anything to go by, he knows he is defeated and by 2019, he will either be gone or very, very quiet.

It’s worth noting that while marriage was the focus of the three days, Labor also passed a number of motions for LGBTI rights, including in education, foreign affairs and aged care without any controversy. Labor also, importantly, agreed to not detain, process, or resettle any LGBTI asylum seekers in countries with laws that criminalise those communities. The party also agreed to consider laws in those countries against the LGBTI communities in considering refugee applications from LGBTI asylum seekers. 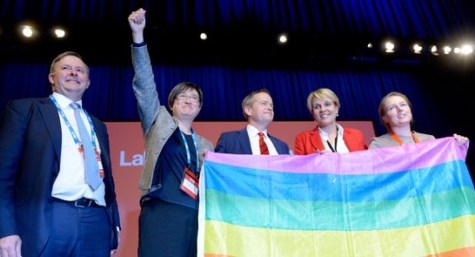 Which Labor MPs have changed their minds on same-sex marriage?

Are we really supposed to applaud Labor for instituting a binding vote… from 2019? And this with 70%+ of the public supporting equal marriage. What a damp squib.

Call me a PC pedant, but could we drop the use of ‘gay marriage’? The issue is a discriminatory law, not what uglies are being bumped by any given happy couple. Cheers.

Good article, apart from a bit of artistic licence such as the hackneyed ” a crucial test” and “could have unseated either him or his deputy”, the usual hyperbole.

The real take away messages are:
1. Its a big win for Shorten and co.
They changed a loss into a neutral/positive with a win shortly down the track.

2. Its a huge loss for the hard Catholic Right of De Bruyn.
As the photo aptly illustrates.

Which really raises the question – is the pernicious influence of De Bruyn coming, finally, to an end?

That’s 3 major defeats in fewer years.
The first was the attempt to put Farrell at the top of the SA senators list in front of Wong. That came a cropper.
Then Farrell was stared down by Weatherill over parachuting Farrell into a safe seat and, contrary to the dire forecasts of some in the SA ALP, Weatherill won the ensuing election.
And now this.

Let’s also remember marriage equality is Labor Party policy. It is therefore not unreasonable for Labor’s rank and file members and/or the National Executive to select candidates by factoring in their willingness (or otherwise) to abide by party policy.

The whole issue of conscience voting would disappear overnight if those remaining troglodytes who oppose marriage equality, abortion or stem cell research just joined the DLP or Family First which is where they probably always belonged.

A lot can change in a short space of time.

Spare me from these ‘radical’ Catholics!
I was raised in that mythology, but saw the light decades ago. How dare they try to foist their religion on everybody else?
One thing not mentioned in the article, was the promise from Tanya Plibersek that legislation to allow same-sex marriage would be tabled in the parliament in the first 100 days of a Shorten government. Since that could take place in 2016, who cares about what might, or might not, happen in 2019?