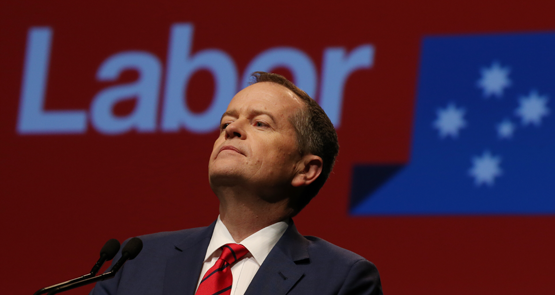 It’s not exactly “with one bound Bill was free!”, but Bill Shorten is now in a stronger position than looked possible just three weeks ago after a Labor national conference that went about as well as could be expected for the party leader. Of all the various scenarios on offer — a NSW Labor privatisation-style debacle where the party leadership is humiliated, a chaotic, protest-marred conference, a banal script-reading like 2009’s awful Ruddfest — this was the least worst outcome, for Shorten at least, although the commentary that Tanya Plibersek didn’t exactly burnish her credentials over the weekend isn’t unfair.

In the end, the turnback amendment was soundly defeated. What was noticeable was the lack of compelling argument from the left on the issue, despite the passion and angst. Insistence, without evidence, that boat turnbacks don’t stop drownings can’t be the basis for rational policy when the number of drownings between Indonesia and Australia has fallen dramatically. And adherence to international agreements is not — this is a point some refugee advocates have difficulty understanding — a meaningful policy goal in and of itself. It’s no good adhering to international obligations if it means people die; they’re not somehow less dead because the country they were trying to reach is in full compliance with the Refugee Convention.

Shorten’s own performance was better than might have been expected from a man whose lack of cut-through and inability to outperform a profoundly flawed Prime Minister has been front and centre of political debate for months. His speech yesterday morning, in particular, was interesting. He singled out his opponent on the turnbacks issue, Andrew Giles, for praise, poked mild fun at the nostalgia for more heated Labor conferences of yesteryear (Labor complaints about how stage-managed modern conferences are compared to the good old days have been around since the Hawke era) and then devoted considerable time to pointing out the contrast with the Liberals’ internal processes. The recent Federal Liberal Council, he noted, had voted to revisit the 18C issue and investigate whether climate change exists (typically for Shorten, he followed that up with a dad-zinger about the moon landing).

The government, by the way, played dead on the weekend; only bungling dolt Immigration Minister Peter Dutton shambled forth to insist Labor wouldn’t really turn back boats; the Prime Minister took a break to spend time at the snow with his family, and pose for News Corp photos. Perhaps Liberal thinking was to let Labor’s display of its internal divisions occupy the media; if so, they may come to rue leaving this stage of Shorten’s recovery uncontested.

As his Sunday morning speech reflected, Shorten is keen to emphasise Labor’s differences with the Liberals in the areas where he feels he can win. That had a pointed consequence at the end of the conference, with a successful motion that by 2025 50% of Labor MPs would be women. The motion was not so much about Labor federally: 15 of Labor’s 25 senators now are women; 21 of 45 MPs are women; the party has a female deputy leader and female Senate leader. It’s more about pointing up the staggering difference between Labor and the Liberal Party, in which female representation has collapsed since the Howard years: just six of 27 Liberal senators and 16 of 74 Liberal MPs are women.

This is part of Shorten’s portrayal of Labor as forward-facing and the Liberals as backward-looking, a bunch of unrepresentative men out of touch with the electorate; he wants to appear at least a little visionary at a time when you can barely hear detailed policy discussion for all the clamouring about the lack of reform. It’s not quite as simple as that, of course: Labor is locked into fighting old ’80s-era battles on the GST, for example, and can’t even do away with its “democratic socialisation” objective without a review. But the platform that emerged from the conference gives Shorten the policy tools to argue this distinction, particularly on renewable energy, while minimising Labor’s fundamental weakness on asylum seekers. It’s now up to Shorten and his team to sell that narrative between now and the election.

As the polling for Shorten and Abbott demonstrates, both sides have serious leadership problems. For the moment, however, Labor has resolved its leadership issue: Shorten’s authority has been repaired, he’s been given the policies he wants; he will be the author of his own fate. Helping him is the fact that, despite his terrible polling, Labor still has an election-winning polling lead. The Liberals don’t have that comfort. Despite Tony Abbott’s frenetic efforts since February, their leadership problem is unresolved.

Again with the cut’n’paste BK – “… the number of drownings between Indonesia and Australia has fallen dramatically…, sez who, morriscum? dunnuttin?
As they say in the classics, ‘citation required’.
The best thing Labor has going for it is Abbottrocious & his uglies, the best the torys have is Boil Shlernt.
The best this country has in the Greens.

Bill is still not leadership material. He looks so uncomfortable pretending.