The Jesuit head of the Asia-Pacific region has slammed Tony Abbott's refugee policy, and the big man himself has taken a position very contrary to Abbott's on the environment. 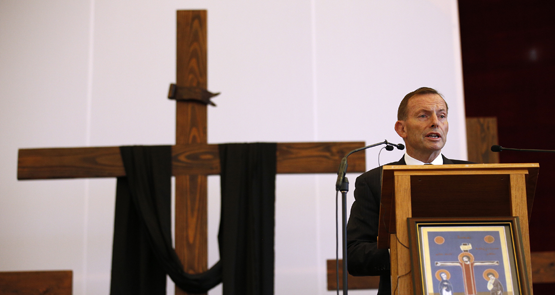 Australian priest Father Mark Raper, the Asia-Pacific head of the Catholic religious order the Society of Jesus (aka the Jesuits), has lambasted the Australian government for being “short term, narrow, self-interested, merciless and out of touch”.

Raper’s official title is president of the Conference of Provincials for the Asia-Pacific area, which extends from Myanmar across mainland China to Japan in the north and through south-east Asia, Australasia and the Pacific Islands in the south.

He also praised the recent encyclical by Pope Francis entitled Laudato si’ (Praise Be to You) and subtitled Care for Our Common Home — the Catholic Church’s equivalent of a policy statement and teaching manual on the environment.

“While clearly there must be many constraints on politicians, I have to say it is disconcerting to be an Australian living in Asia today and to be represented by political leaders whose perspectives are so short term, narrow, self-interested, merciless and out of touch with Asian realities, as in the case of migration,” Raper told Crikey at the semi-annual get-together of Jesuit leaders from around the region in the Cambodian town of Siem Reap.

“Australia is not alone in the face of contemporary challenges,” he said. “Yet we rarely get on the front foot, we are seen as isolated from common efforts to find lasting solutions to the dilemma of the contemporary mass movement of people.

“To give just one example, Australia spends more on counterproductive, inhumane detention and redirecting of vulnerable migrants than the whole budget of UNHCR worldwide. How crazy is that?”

The Jesuits are widely seen within the Catholic Church as an elite, educated and more liberal-leaning order. In 2013, Cardinal Jose Mario Bergoglio was elected as the first Jesuit Pope since the extremely influential order was formed by Spanish priest Ignatius Loyola in 1540.

The PM was educated by the Jesuits, completing his primary school years at St Aloysius at Milson’s Point and then his secondary school at St Ignatius College, Riverview.

Also an alumnus of Riverview and school captain there, Raper made his comments two months after an exclusive annual dinner for Jesuit-educated colleagues and friends that the PM hosted in Parliament House on the Wednesday night after the federal budget.

Each year since he became opposition leader, Abbott has held a special dinner in the parliamentary dining room on the Wednesday after the budget meeting. Now as PM, it occurs in his own dining room.

It’s an exclusive, invitation-only list with the singular requirement that the Jesuits have educated all those at the dinner. The dozen or so attendees are a mix of ministers, backbenchers, business folk, Liberal Party staffers and even the odd member of the clergy — in the person of the Liberal Party’s chaplain-at-large and old Abbott mate Father Michael Kelly.

There was only one woman present. No surprises, folks. It was Peta Credlin, the PM’s omnipotent chief of staff, whose Jesuit credentials were her attendance at Melbourne University’s Newman College.

Raper’s description of Laudato si’ as a “tremendous gift” is telling. It places the Jesuits implacably on the other side not just of the government’s refugee policy but its environment policy as well.

“It’s not just a boost, it’s insightful in new ways,” said Raper, adding that the document brought together “solid science, deep theology and quite a radical view of the place of human life in creation. It’s most inspiring.”

Laudato si’ urges faster action to halt poisonous emissions and backs the position of the vast majority of climate scientists that humans have a undeniable part in climate change.

Raper says the problem “is staring you in the face” and says Pope Francis brought his landmark paper forward two months from August to June specifically to target the global climate change conference on Paris in November.

Tony Abbott’s Jesuit and very, very Catholic cabinet can expect plenty of (not so) subtle pressure on this, migration and other policy subjects.

“Short term, narrow, self-interested, merciless and out of touch” wouldn’t fit on a bumper sticker as a description of the Abbott government, but it’s not bad and pretty accurate as a description. According to this morning’s ‘Age’, one was seen on a Porche Cayenne diesel in the Perisher car park describing Abbott’s Australia as being “meaner, dumber, hotter”, which bemused me, since the Porche Cayenne diesel apparently retails from $104,000 (although its claimed fuel consumption isn’t bad at 6.5 litres/100 kilometres wouldn’t shame an affluent Green supporter too much – I think I barely get 6 litres/100 kilometres in the much smaller car I drive less than 1000 kilometres a year).

My goodness, I’d hate to be the priest on duty when these lads use the confessional….i was a catholic once !

So we can add Jesuits to talkback radio callers as people with simplistic answers to difficult policy conundrums.

Amused by Chris Ulhmann’s Insiders “informed” observation of “gay marriage” as reflected by the “devout Christians(?)” in parliament?
Right – as long as you ignore Commandments 2 and 8 – and probably 3, 6, 7, 9 and 10?