Is underlying inflation out of control? Plus other business tidbits of the day.

The message from lower gold. The graph below of Australian consumer price inflation, and the Reserve Bank’s preferred ways of measuring inflation, tells us why gold bugs and many alarmist analysts and media have been wrong about inflation in this country in recent years. The graph, from AMP Capital, shows inflation over the past 10 years — the peak of 5% or more in the run-up to the GFC in 2007-08 (remember how the cost of bananas skyrocketed after Cyclone Larry in early 2006, then the mini-surge in 2011 after the Brisbane floods and Cyclone Yasi in quick succession?), and then the one-off impact from the carbon tax in 2013-14, and then its abolition and the subsequent fall. But looking at the graph, headline and underlying inflation have been falling steadily since the peak in 2008, helped by the GFC and the rise in the value of the Aussie dollar (even with the carbon tax) and lately by the slide in oil prices.

Now quite a few hyperventilating economists, analysts, politicians, media outlets and columnists fearlessly predicted the boom could generate so much inflation it would wreck the economy, along with surging wage costs, etc, etc. None of that has come to pass, even from the carbon tax. On top of that, interest rates have been or around record lows for the past three years, normally a recipe for a boom (as we are seeing in Sydney and Melbourne property prices, but nowhere else). Wage costs are now struggling to keep up with inflation, employment has turned up for the better in the last nine months or so and yet the world hasn’t come to an end.

And the same applies globally where The Australian Financial Review and The Australian, plus local banks and other forecasters, have consistently told us that the quantitative easings by major central banks, such as the US Fed, the Bank of England, the Bank of Japan and now the European central Bank, would trigger asset bubbles, collapses and hyperinflation. Nothing of the sort has happened, and the latest plunge in commodity prices, led by gold, tells us that it is not going to happen. The US dollar hasn’t collapsed, nor has the euro. Gold is down more than 40% from its peaks around US$1922 an ounce in 2011. Copper is at six-year lows, along with some other commodities. And if commodity prices are going to remain weak in coming years and economic growth will be less than trend, inflation will remain moderate, as will wages growth. This will mean nominal GDP growth will be slower and lower, meaning more revenue pressures for governments of all levels, no matter what they do with tax and spending reforms. — Glenn Dyer 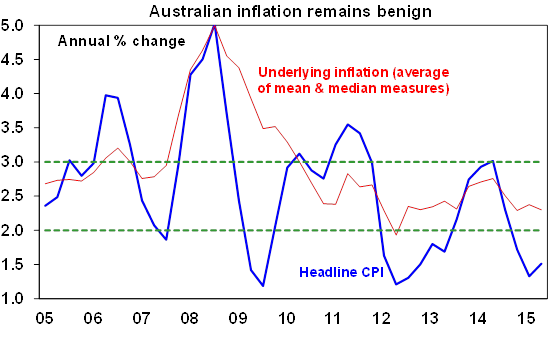 Recounting the beans. This Thursday night’s first estimate of American second-quarter GDP will be released and will be parsed, crunched and squeezed by markets wanting some guidance on the timing of the Fed’s next interest rate rise. It will come less than a day after the Fed itself releases a statement after its two-day meeting, which will also be squeezed, crunched and parsed on guidance for the rate rise (September 27 remains the best tip). But the GDP estimate will be more notable (not only for the fact that it almost certainly will change in the second and third estimates over the next two months) for the long-awaited revisions for past quarters and years. AMP chief economist Dr Shane Oliver says second-quarter growth will be around 3% (annual), “but watch for a seasonal reanalysis of March quarter GDP growth which is likely to see it revised up from -0.2% annualised to maybe +1%”. And others say watch for small changes to the first quarter of 2014 and several other first quarters over the past few years. That’s because of doubts about the accuracy of seasonal adjustments to the data for the March quarter to take account of the impact of winter on economic activity. But that, in turn, could lower growth in other quarters, such as the three months to June 30 this year. So the net result may be an economist’s dream as explained by the phrase “on the one hand, but on the other hand …” — Glenn Dyer

Terms-of-trade boost augurs well for the economy and budget

OK. But why exactly has there been no inflation with all this QE?