With his leadership weakened, Bill Shorten has made two high-risk plays ahead of Labor's national conference. 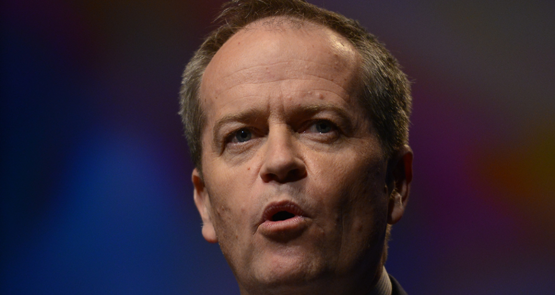 It’s just two weeks since Bill Shorten’s trade union royal commission appearance, highlighted by an admission that he and the responsible Labor Party branch hadn’t declared 40-odd thousand dollars in donations (which in fact turned out to be closer to $70,000, although the media had lost interest), and just over a week since someone within his ranks leaked a draft emissions-trading policy, before it had even gone to shadow cabinet. His polling has slumped to Abbott-esque depths. He should have entered the most strongly contested and least stage-managed Labor national conference seriously weakened.

One reason he hasn’t, of course, is Bronwyn Bishop, whose long-term taste for ostentatious travel has come back to maul the worst speaker since Leo McLeay. Joe Hockey complained on the weekend — while keeping the story going, mind — that Bishop had sucked the oxygen away from anything else in the political conversation and he wasn’t wrong; as late as Wednesday even News Corp was still devoting front pages to “Bron Perignon” (pay that one).

Another reason is that, even while Shorten’s personal numbers have collapsed, it apparently hasn’t had any impact on Labor’s vote. It’s still ahead 53-47 or 52-48, as it has been for most of the year; its numbers might be better with a more popular, charismatic leader, but you can say precisely the same thing about the Coalition.

The other reason is Shorten’s decision to attempt two high-stakes plays ahead of the conference. The 50% renewables target isn’t a problem for the conference, where it’s likely to be welcomed. And it shouldn’t really be a political risk, given how much community support there is for more support for renewable energy. But it sets up the sort of dynamic that favours Tony Abbott: a big policy target to run a negative campaign against. That’s Abbott’s forte; he’s every bit as good at running a negative campaign as he is bad at explaining anything else. But he’ll start this one without the benefit of voter perceptions of an egregiously broken promise, as he did with Julia Gillard’s carbon price. And voters perceive that the Coalition — presumably because of the massive flow of donations from the energy and resources sectors into its coffers — are ideologically rigid on fossil fuels in a way that everyone else isn’t.

With some basic communication skills, Shorten should be able to pull it off. But that’s a big assumption. Nonetheless, it establishes a clear policy divide and clear difference of economic vision with the government. In contrast to 2014, Shorten has spent much of this year agreeing with the government — including on a deal to lower the Renewable Energy Target. That has accompanied — perhaps entirely coincidentally — the significant decline in his polling. The renewables policy and his confirmation today that Labor will introduce an emissions trading scheme (which has been Shorten’s public policy for a year) returns to a more oppositional approach, and will mean the next election will at least partly be conducted on turf of Labor’s own choosing. And the long section on climate change in this morning’s speech was, for Shorten, an unusually strong combination of rhetoric and fact.

The shorter-term risk, of course, is on boat turnbacks, which were pointedly not mentioned in Shorten’s speech. Defeat over the weekend — and the insertion of a prohibition on turnbacks into the party platform — would badly, maybe critically, damage Shorten’s leadership. Defeat on other issues — say, same-sex marriage, or party reform — wouldn’t be a good look but could be put down to a willingness to have a genuine party debate rather than embrace Tony Abbott’s leadership philosophy of captain’s picks and belated apologies. But on boats, it could be terminal. Although, for that matter, if Labor is so suicidal as to explicitly embrace a position of weakening border protection, then Shorten is unlikely to ever become Prime Minister anyway.

We’ll know in the next 48 hours if Shorten’s gamble on boats has been successful. The success or failure of his renewables ploy will take much longer to determine. But things haven’t at all gone how they looked to be going just a fortnight ago.

[That’s Abbott’s forte; he’s every bit as good at running a negative campaign as he is bad at explaining anything else.]

The latter part of that sentence is correct.
The first part is wrong.

Abbott can’t do negativity any better than anyone else.

Its not down to him that negativity won the ’13 election.

One only has to look at Greg Jericho’s compilation of newspaper front pages during the election to see the negativity that was directed at the ALP, and the Greens, and none of that was attributable to Abbott per se but almost entirely the creation of the media.

As even Tony Jones said, in one of his more lucid moments, to some COALition fella WTTE “Of course it can’t hurt to have Rupert Murdoch on your side”. And the rest of the MSM including the ABC.

Take away the media support Abbott and the COALition get and the result is a vacuum.

“But on boats, it could be terminal. Although, for that matter, if Labor is so suicidal as to explicitly embrace a position of weakening border protection, then Shorten is unlikely to ever become Prime Minister anyway.”

You confuse the incapacity of Labor to argue its case with an electorate unable to understand nuance.

The electorate are not to blame for an apparent myopia on border protection, the politicians are.

When in government, Labor didn’t explain how the regional processing centre would work, put enough money towards it nor think carefully enough about who would run and oversee it (hint: us and NZ would need to oversee it).
At the same time, the Greens showed pure short-term opportunism in rejecting a regional processing policy outright.
Liberals subsequently solved the problem the two decisions above created in terms of an uncontrolled border by a asshole policy.

This doesn’t mean that being an asshole now becomes the only acceptable behaviour. It means Labor need to learn how to explain a policy and the Greens need to realise their intransigence only helps Abbott because it makes the entire progressive stance on border protection look confused and ineffectual.

In summary, don’t be such a cynical bastard, Bernard.

Are they going to kick Shorten out do you think?

Time to bring in the Drover’s Dog methinks!