The new counter-terrorism strategy ignores the hard reality of what causes radicalisation, in favour of a neoconservative straw man. 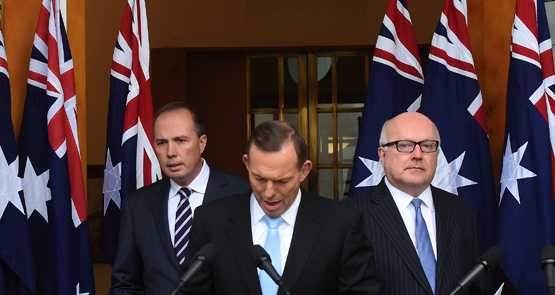 The official Council of Australian Governments Counter-Terrorism Strategy, unveiled yesterday, is one of the more dangerously vapid government documents of recent history, if indeed it provides the framework for how Australia deals with terrorism. Media coverage focused on the separate matter of a new terror alert level system, but that’s mere national security marketing detail. The strategy offers the worldview of politicians and counter-terrorism officials, and it’s scary — though not in the way intended.

On the positive side, the strategy in effect declares Malcolm Turnbull the winner in his stoush with friend and colleague Julie Bishop over whether her insistence that Islamic State (also called ISIS, ISIL or Daesh) is, in essence, the greatest threat to the world in its entire history was absurd hype. There’s no mention of “existential threat”, no comparison with the Cold War, no reference to the Treaty of Westphalia. And there’s not a “Daesh death cult” in sight. Instead, the strategy more soberly says:

“ISIL represents a new ‘business model’ for extremist groups. With its income from extortion, oil and contraband sales, as well as funding from wealthy sponsors, ISIL is now among the best-resourced of terrorist groups. Because ISIL actively seeks new recruits from around the world (not just Syria and Iraq), its numbers are growing and it is now the biggest terrorist group … also the most ‘internationalised’ of the terrorist groups to have emerged in the Middle East.”

So far, so good, but from this calmer, more realistic basis, the document repeats many of the mistakes, deliberate or otherwise, of Western governments about how terrorists are created and how to respond to them. In particular, the strategy takes its lead from Julie Bishop’s nonsensical history of the War on Terror. “AQ [al-Qaeda] and others have taken advantage of instability in the Middle East — particularly in Syria, Iraq, Yemen and Libya — to build capacity, spread their ideology, and organise and launch attacks,” the strategy says, as though Middle Eastern instability just sort of happened, or perhaps is just endemic in Arab countries, without any input from the West. In fact the only vague mention of the military intervention war in Iraq that created IS is a boastful one — in the section called “Working with partner countries”, the strategy notes “in some cases, Australia has also contributed to international military efforts to remove or limit the strategic space available to terrorist groups. Our operations in Afghanistan and Iraq are examples of such efforts.” Although, to be fair, at least the document doesn’t repeat Julie Bishop’s offensive howler that the Arab Spring caused IS.

This is the bizarro world of neoconservatives — one in which Islamic State emerged fully formed from “instability”, none of which had anything to do with Western military interventions, or interventions by our proxies, like the slaughter Saudi Arabia is currently engaged in in Yemen. It’s a world in which terrorists “hate us for our freedom” rather than for our actions. It’s also a world that is directly dismissed by the people on the front line of fighting terrorism. As Crikey has noted repeatedly — and we’ll go on noting it — both the current head of the CIA and the former head of MI5 have directly, explicitly stated that Western military interventions undertaken as part of the War on Terror create terrorists. So too do the most experienced Western experts on radicalisation.

What does cause radicalisation, according to the strategy?

“The common element in radicalisation is exposure to violent extremist ideology … Other drivers, such as social isolation, a longing for a sense of purpose or belonging, long-term unemployment, criminality, or perceived political grievances, may also contribute.”

The problem is, most of those identified factors can be demonstrated to not play a key role in radicalisation. The path of many jihadis to violence often begins with participation in legitimate political processes, which are subsequently renounced when shown to be ineffective. Far from being “socially isolated” many jihadis are strongly engaged both with peer networks and broader political or religious groups; nor is there a clear link between unemployment and propensity for radicalisation (the perpetrators of the 2007 London bomb plots were doctors). But the list omits an elements in jihadi attacks in the West — especially in the US — the role of mental illness or drug use (in the US of course, the FBI and informants/agent provocateurs tend to be behind nearly every Islamist terrorist plot, usually involving a mentally ill subject).

The only faint recognition of the most widely identified common factor in radicalisation is the last item on that list, “perceived political grievances”. It’s unclear what’s meant by “perceived” — were hundreds of thousands of Iraqis only “perceived” to have died as a result of the western invasion of Iraq? Were thousands of Syrians only “perceived” to have been butchered by the Assad regimes and its barrel bombs? We know as hard fact that these mass casualties prompted people to either travel to war zones in order to join the fight, or attack their own western communities. Suggesting “perceived political grievances may also contribute” is an extraordinary dismissal of what is agreed to be a key — if not the key — cause of radicalisation across senior intelligence officials, radicalisation experts and terrorists themselves.

Any effective strategy starts with an accurate understanding of what it purports to address. This is strategy for dealing with a deadly straw man, the terrorist of neoconservative fictions, rather than the real ones that threaten Australian lives.

Par for the course for this, the worst government this country has ever endured aided and abetted by the worst opposition.

Clearly these clowns are never going to admit to the ultimate causes of this ghastly mess and will continue to trick a largely ignorant populace with a bunch of deceptive proximate factors. To admit the truth is to correctly label Howard, Blair and Dubya war-criminals.

How many red herrings can you wrap in it?

Of course none of this present state of affairs could be “our fault” – because it if was, we might take a closer look at strategies then:now, and who was in charge then, as now (being remnants there-of)…..?

Excellent comment Bernard. It is truly frightening that our politicians (and most of the so-called experts) seem incapable of understanding that it is the policies of our western governments that cause so many of the problems. As one consequence we seem determined to follow one disaster with another. You correctly cite Julie Bishop’s idiocies on foreign policy, but it is equally true that the Labour Party seems equally incapable of producing a coherent, logical and morally consistent response.