Earth-like planet might hint at our beginning, and foretells our doom

The prosaically named Kepler 425b might be capable of supporting life. But its star is about to explode and destroy it. 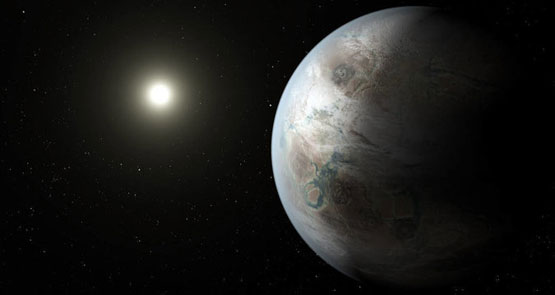 The discovery of an Earth-like planet was inevitable, but finding one near its death is cruel.

The Kepler Space Telescope has discovered planet Kepler 452b, 1400 light years from Earth, and at just the right distance from a sun similar to ours. The planet is old, some 1.5 billion Earth years older than our planet, and its sun is close to the end of its life cycle, when it will expand and destroy any inner planets that orbit it.

The news about Kepler 452b isn’t in print this morning, as it happened too late for our dying newspapers to carry the NASA announcement, but it is all over some of their online news services and the likes of ABC News 24.

The Kepler Space telescope has previously found planets within the so called “Goldilocks zone” in their orbits around a star (or sometimes, stars) but never of a size similar to Earth, even though the nature of its surface and atmosphere is yet to be determined.

The Goldilocks zone is where water can co-exist in its solid, gaseous and liquid forms, and thus become part of systems where the exchange of water between land, sea and sky can occur.

The sci-fi scenarios that could be suggested by Kepler 452b are many and obvious. If intelligent and technologically competent life forms had arisen on it within the 4 billion years it took on Earth, did it have time to try to escape from the planet before its sun died?

Or did it try something different and manipulate the behaviour of its sun so that its age no longer matters as much as it might seem to our cosmologists and physicists? Or did it reach a similar state of development to our civilisations, only to destroy itself or be destroyed by some other natural calamity, such as a collision between Kepler 452b and a giant comet or asteroid?

If, as is possible, the force of gravity felt on the solid surface of the planet was twice as powerful as on Earth, upright life forms might have been inhibited, and powerful crawlers, or species adapted to living submerged in oceans, or existing within very hard shells, might have become the inquisitive and manipulative dominant creatures.

All are hypotheticals that science fiction, as well as science, has contemplated for ages.

Someone will suggest we came from Kepler 452b, which would seem like an incredibly long bow to draw!

The discovery underlines one of the challenges for the search for alien technologies, such as the recently launched $130 million project by Russian Silicon Valley entrepreneur Yuri Milner and backed by cosmologist Stephen Hawking.

That search has to match an uncertain period of time, during which an advanced interstellar technology used radio waves to send signals out into the universe (assuming the creators of that technology wanted to be found) and had its messages received and understood by such a target civilisation.

The universe might be full of such messages from dead senders to unborn receivers.

Which isn’t an argument for not trying. The more science understands how stars and time and quantum physics works, the closer the human species moves toward the start of its real story, as the door to the universe swings open.

Everything else so far has just been the prequel to that story, a view expressed by various visionaries of the past, like Carl Sagan, and those of the present, like Stephen Hawking.

Somewhere beyond Kepler 452b there are technological civilisations, perhaps on planets totally unlike Earth, that remain to be found, by their radio emissions, and perhaps even by the types of synthetic compounds detected in their atmospheres.

The search goes on.

“The news about Kepler 452b isn’t in print this morning, as it happened too late for our dying newspapers “…tenuous at best and unnecessary…would have been the same a few years ago when newspapers weren’t dying and you were flying paper planes

Another planet to bugger? I wonder what the natives taste like….?

I like the idea Keplerians seeded comets with the basic building blocks of their life to disperse to younger Kepler-like planets and re-evolve.

“Somewhere beyond Kepler 452b there are technological civilisations, perhaps on planets totally unlike Earth, that remain to be found, by their radio emissions, and perhaps even by the types of synthetic compounds detected in their atmospheres.”

Yeah possibly, but probably not, and the likelihood of us making actual content is infinitesimal.

But sure, I don’t mind that someone is looking.