Day the muzak died: even Shorten gets a rock star welcome at ALP conference 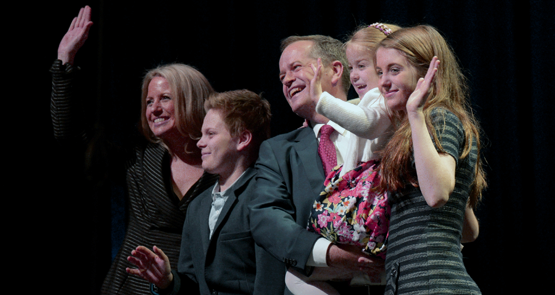 The theme of the opening day of ALP’s National Conference in Melbourne is that leader Bill Shorten can defy expectations and follow Queensland and Victoria in bringing down a Liberal government after one term.

For a party that likes to mock the staging of the Liberal conference, there was very little left to chance at the ALP’s own national conference opening.

“The spotlight is always turned up to 11,” ALP national president Mark Butler said.

“We don’t hide ourselves away or lock everyone else out like the others do at their tedious conferences.”

The conference began with Butler singling out the Labor state premiers and leaders, with the biggest cheers from the 2000 odd delegates, observers and party faithful going to Victorian Premier Daniel Andrews and Queensland Premier and “giant slayer” Annastacia Palaszczuk for their success in ousting Liberal governments after one term.

Deputy Labor Leader Tanya Plibersek said their work could be replicated federally. “We have a government that is cynical, that is divisive and it is damaging our nation. We need to beat them, and we need to beat them in one term.”

In an awkward false start during Andrews’ speech, the mere mention of Shorten brought about a standing ovation well before Shorten was due to take the stage.

Before that could happen there was a five-minute video on Shorten that could have been an ad for a retirement village. Sweeping music, smiles, all the right words.

Reminding the party faithful of how Shorten first gained national attention, the video featured glowing endorsements from Brant Webb, one of the two rescued from the Beaconsfield Mine collapse in Tasmania in 2006.

While the music before the conference was all INXS and Shannon Noll, once the real standing ovation moment arrived, Shorten entered to the very same inane muzak as was in the video.

The conference is likely to include a tight vote between the left and right on asylum seekers and same-sex marriage, and Shorten paid tribute to Gough Whitlam’s ability to unite the party.

“Gough united and changed Labor, so Labor could unite and change Australia. And we must carry on the work of party reform at our 47th conference. Rebuilding Labor as a modern party, to serve modern Australia,” he said.

The largest cheer of the whole speech came after Shorten committed to an emissions trading scheme and vowed not to give in to scare campaigns.

“We will not be intimidated by the ignorant, ridiculous scare campaigns that will come. We will win this fight. Let me say this to our opponents, in words of one syllable: An ETS is not a tax,” he said.

“And if Mr Abbott wants to make the next election a contest about who has the best policy solution for climate change … I’ve got a three-word-slogan for him: Bring. It. On.”

The only booing from the audience came when opposition immigration spokesman Richard Marles was mentioned.

As Shorten pushes for Labor to have the option to adopt boat turnback policies, the real fight will come when this policy is debated on the floor on Saturday.

“We will not be intimidated by the ignorant, ridiculous scare campaigns that will come”. So sayeth Bill Shorten. I hope this courage will extend to the asylum seekers beat-up, the MH17 cover-up, the ISIL threat beat-up, the Islamo-phobic and Russo-phobic beat-ups etc. There is a lot of cleaning up to be done. Has Bill really got the fire in his belly?

What an optimistic review. The so-called “real debate” will be a choreographed bore with the important decisions such as who gets which shares of available perks will have been sorted out by the Powerbrokers, some faceless, some not before the theoretical ‘business sessions’ commence.