Would you believe … It’s been a long winter break for those who work in Parliament House, as without Parliament sitting there’s not much fun to be had. But we hear from a tipster that while MPs aren’t around, the security upgrades have finished:

“They’ve finally finished the main security upgrades at parliament. For the building’s residents that use the childcare facility or the front carpark that means negotiating the new Point One secure entrance. It’s been likened to the intro sequence of Get Smart: press a button here, wait for automated door to open, swipe a card there, wait for the next automated door to open, etc. It’s also security through obfuscation as there’s no signs to tell you what arcane trick is needed to move to the next challenge.”

If anyone gets stuck we hope they’ve got their shoe phone handy.

What about Peppa Pig? Last night staff at ABC shops around the country were informed that up to 300 jobs would be lost after the broadcaster decided to shut 50 stores, while retaining ABC online and ABC centres in other retailers. Speaking on ABC News 24 this morning, managing director Mark Scott said the  shops were no longer making enough revenue, with the shopping habits of Australians moving online. “The ABC shops in this last year have been operating at a loss, and all the advice that we have had indicates it would not be possible for us to be able to run a chain of stores like this profitably into the future. We can’t be in the situation where we’re taking money from broadcasting and investing that to prop up a retail business.”

Looking at the ABC financial report for 2013-2014, it looks like the writing was already on the wall: “[ABC retail] has implemented a revised retail strategy which focuses on transitioning the network from its traditional reliance on DVD and CD formatted product to a broader retail offering encompassing toys, general merchandise, clothing and books”. Despite a jump in commercial revenue last year, commercial revenues were just a fraction of what they were five years ago. 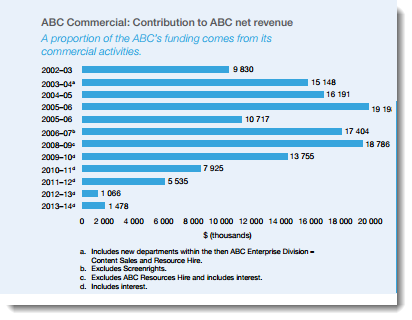 The report shows that the retail revenue was 66.6% of that annual picture — $984,348. Looks like that’s it for Peppa Pig and Little Ted — it’s online or Dymocks from now on. 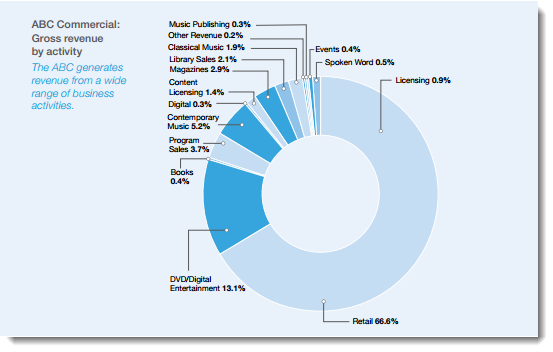 Turn back the delegates? We hear from a tipster that finding accommodation in Melbourne this weekend for the National Labor Conference will come at quite a high price for those who have made a last-minute decision to attend:

“Hotel room prices have gone through the roof. One conference observer who booked weeks ago booked a room at one of the conference’s preferred hotels (The Langham if you want to go that far) for less than $250 a night. There are no rooms available for this Thursday, the first day of the conference, but yesterday they were being quoted at $800+ a night. Friday night is still available but expect to pay $515.”

We checked out the offerings on the conference website, and they’re all pretty swanky — the Hilton at South Wharf, the Langham, Crown Metropol — with some even going at $999 a night. Holding a conference is no time for tight purse strings — and who’s picking up the tab for the MPs in attendance? You guessed it.

Unfortunately we won’t see how much of that tab we’re picking up until Finance publishes the expenses filed by the pollies sometime next year. While we’re sure none of the non-Victorian MPs or senators attending the conference will take the Bronwyn chopper, the taxpayer is still looking at footing the bill for at least 57 MPs and senators to fly to Melbourne this week. This includes 22 NSW politicians, 10 Queensland politicians, eight from South Australia, six from Western Australia, six from Tasmania, three from the ACT, and two from the Northern Territory.

Comparing the cost for flights to the 2011 Labor National Conference in Sydney is no help, either. There are varying costs even just for MPs travelling from Melbourne to Sydney. Opposition Leader Bill Shorten, for example, charged taxpayers $1095 for his return flights, while fellow Victorian Jenny Macklin’s flights cost $540.

Why so much for such a short flight? Shorten’s office told us our questions on the flight costs were best directed to the travel agents.

. Rumour has it that the (TM — Crikey‘s mail delivery system does not allow superscripts) was needed because the company tried and failed to get a couple of variations of NBN registered with IP Australia.

But the company has grown to love its superscript (TM), with the symbol appearing all over the company’s website. This week the company even bought its own URL shortener, nbn.tm. NBN has confirmed that use of this URL shortener is costing the company $495 per year, but it is “a valuable tool because it will give us insights into what content is being consumed where as well as how much”. The .tm is a domain commonly used to signify trademarks, but is the industry code top-level domain for the country of Turkmenistan. Turkmenistan was ranked the third worst for press freedom conditions behind Korea and Eritrea by Reporters Without Borders in 2014.

Is there something you’re trying to tell us, nbn(TM)?

Vader demands your presence. Chris Bath shared the invite she’d sent colleagues to her farewell party on Instagram on Tuesday. 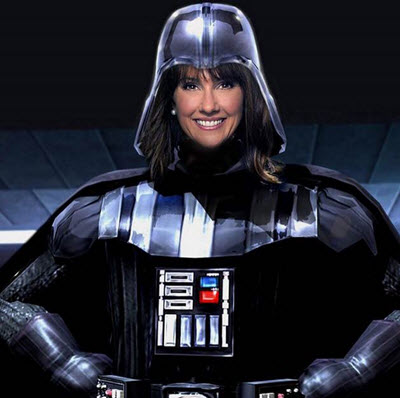 The caption, she wrote, reads:

Bath’s Bath Vader moniker was reportedly coined by network rival and breakfast TV Sam Armytage, but lovingly adopted by Bath, who is clearly still getting mileage out of it …

Broadcast news love-in. Australia only has two live news channels, and you’d expect competition between the two would be cutthroat. But it was all love at the Melbourne Press Club yesterday, when ABC News 24 founder (now head of news content) Gaven Morris took time out of his speech on News 24’s first five years to pay effusive compliments to Sky News.

“I want to take a brief moment to acknowledge our Sky News colleagues here today,” he said. “Because what News 24 did for the ABC culture, Sky News did for our entire industry. Just as CNN did in the US, Sky News and Al Jazeera did across the Middle East, Sky News in Australia broke all the news orthodoxies about how you can and can’t produce news about what’s important to audiences, about how live broadcasting could be mounted.

“They showed everyone how live broadcast and political analysis can be achieved at a fraction of the big network budgets. Sky News turns 20 next year. It’s a big achievement. A much bigger milestone than this one. A wonderful achievement.”

Attending the speech was a table of Sky News hosts and contributors, including former News 24 host Jim Middleton (sitting next to Peter Reith) and Sky News Melbourne reporter Ahron Young. Young got the first question, and made sure to point out he and his colleagues bore no animosity towards their ABC News 24 competitors. “Working with your guys over the past five years, we certainly don’t see them as competition, but as people who are enduring what we’re enduring on the road.” How lovely.

Another Brandis blind spot Arts Minister George Brandis likes to think of himself as the Arts Minister who knows his arts and has ripped $105 million from the Australia Council so he can use his own expertise, and the expertise within his ministry, to allocate arts funding. But last year when he was introduced to one of Australia’s most popular and prolific playwrights, Joanna Murray-Smith, he couldn’t quite remember who she was. Murray-Smith (wife of our Daily Review editor Raymond Gill) revealed last night in her keynote speech at the National Play Festival in Adelaide that Brandis had looked at her quizzically and responded to the introduction with: “Oh yes, I think I’ve heard of you.” Read Murray-Smith’s full speech, which criticises Australia’s arts leaders for their response to Brandis’ cuts, at Daily Review.