The Australian mans the phones -- to its internal directory. Plus other media tidbits of the day,

Not leaving the building. It seems scribes at the media section at The Australian are saving money on phone bills by turning to their internal phone line in search of expert opinion. A Crikey tally found that a quarter of the people interviewed for the Monday print section over the past five weeks had some sort of affiliation with parent company News Corp.

In the past five editions, which admittedly featured a couple of large media stories involving succession at the parent company and the like, 65 people were quoted in the publication. Of those 65, 16 of those have recently worked or still work for News Corp.

Their natural look. It’s been like five days, so let us mention this one more time and then we’ll drop it.

One of the things much discussed after that Fairfax Sunday Life profile of some of the ABC’s female news stars was their rther contrived photoshoot (pictured above). “Why not really show these ABC presenters on the job as they really are? Why turn them into an ABC equivalent of a Vanity Fair Oscars cover?” former ABC News journalist Whitney Fitzsimmons asked in Crikey on Tuesday, and she wasn’t alone in her distaste. What did the ABC’s screen queens think of it themselves? It turns out Leigh Sales and Annabelle Crabb told us last week, in their delightfully free-roaming podcast Chat 10 Looks 3.

In the July 13 episode (beginning around the 14-minute mark), Sales and Crabb discuss their approach to style and fashion when Crabb begins to say she often gets put in great outfits that aren’t really very “her”.

Crabb: I did some photoshoot thing where I got put into something rather … I looked at it and I thought, I can see this is a great outfit, it’s very fashion-forward, but I’m just gonna look at that picture and think …

Sales: Is that the one that we did together?

Crabb: No, it was a different one

Sales: The one we recently did, the photoshoot together, the look of it was quite ‘sexy’, and while I thought you and I both looked nice, I would not say that our natural look …

Sales: So we looked … you know how people dress up their dogs for Halloween?

Crabb: There was a bit of that. But I found my place at the very edge of that photograph and lurked there.

Sales: My natural look is, I can’t be arsed.

So, there you have it. And with that it is dropped. Let us never speak of the profile again. — Myriam Robin

Government stenographers … Is The Australian even trying to pretend it’s a media outlet rather than a Liberal propaganda outlet anymore? It was all hands on deck at the in-house journal of the Australian Prostate Institute in response to Labor’s announcement about renewable energy, with virtually the entire front page today pressed into service of attacking the idea. Pieces included one by Dennis “we keep him because he’s perfectly representative of the readership” Shanahan, a second by Graham “Efrem” Lloyd and a third by young economist Adam Creighton. The headline was “Electricity Bill’s Carbon Reboot” — which employs the exact label that the government put a lot of effort into trying to pin on Bill Shorten after he became leader in 2013 (one of Bronwyn Bishop’s screw-ups as Speaker was declaring “Electricity Bill” was parliamentary language, until the government realised that it opened the way for such name-calling on all sides). Not content with recycling the Liberals’ failed attack slogans, the Oz also invoked the CFMEU as an authority on renewable energy. But wait — isn’t the CFMEU, according to the government and News Corp, the corrupt, crooked, evil rogue union that badly needs reining in? Yes, they’re one and the same — Labor should be distancing itself from them, we’re told, except, um, on climate policy. To top it all off, Adam Creighton declared that Labor’s policy “could significantly boost retail electricity prices, as more unwanted supply is forced into a market already groaning under excess capacity”. Last time we studied economics, which admittedly was quite some time ago, extra capacity led to lower prices, not higher ones. Sounds like a great opportunity for our power companies — just produce more and more renewable energy and they can charge higher and higher prices. What are they complaining about? —Bernard Keane

Herald’s pedigree. Our report yesterday that the Labor Herald hadn’t been granted press gallery accreditation drew quite a reaction on Twitter, with Labor Senator Deborah O’Neill wondering how newspapers funded by private enterprise think they can claim ideological purity, while Fairfax gallery scribe James Massolla said he couldn’t believe the Labor Herald had tried to get accreditation at all.

The press gallery’s website contains several photos of historical gallery members, including, in the 1930s, several photos which include a D K Rodgers, from the Labor Daily. Here’s one. We’ve drawn a helpful arrow atop Rodgers: 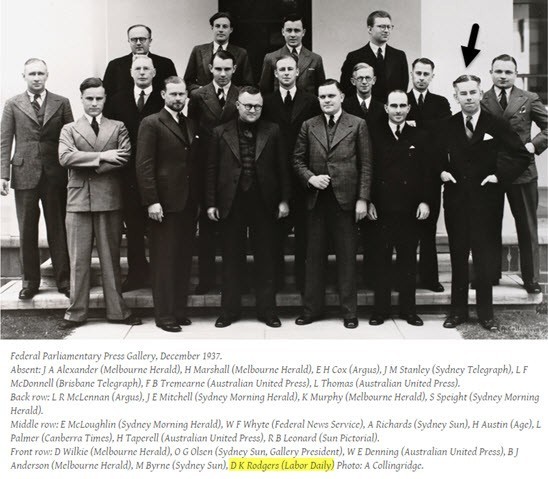 Funnily enough, the Labor Daily’s successor is still in the press gallery today. The Labor Daily was first published under that masthead in 1923 when the NSW Labor party took over the struggling Daily Mail a few weeks after the Mail launched. In 1938 the Labor Daily became the Daily News, and in 1941, it was taken over by The Daily Telegraph. — Myriam Robin

Episode four. The Intern, a comedy web series by Lewis Attey and Dan Wood, continues today with episode four, “Thursday”. Subeditors Damian and Ryan are forced to confront some hard truths about Australia’s racial politics. But will they finally learn a valuable lesson about privilege and respect?

Need to catch up? Episodes one, two and three are available here. 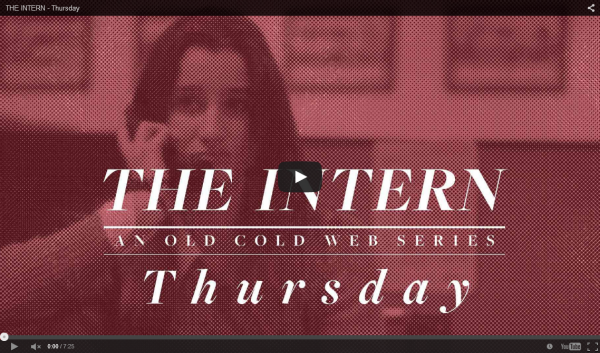 Press gallery playing to Abbott’s tune: who’s on the drip and who’s shut out?

Annabel Crabb – to London with love

BK, enough already with the attempt at Grundle-like verbal pyrotechnics. Stick to straight reportage.
Why the hell does Crikey persist in giving links to mudorc’s paywalled crap?

Re the Government Stenographer – News Corporation. We all know that the major dailies have taken to distributing free copies of their publications in various publice places. But the Government’s Propoganda Deartment, News Corp., are experts. Free Daily Telegraphs are often seen at coffee shops. Yesterday on a Virgin Flight from Canberra to Sydney I was concerned to see on each aircraft seat free copies of The Australian with the headline ‘Electricity Bill’ . Returning to Canberra on Virgin today the gate had a rack of Australians and Daily Telegraphs- not a Fairfax publication to be seen. It would be interesting to ask News Corp how much this Government support is costing them and to Ask Virgin Airlines are they too in attack mode on Labor.