While the moral and policy issues around boat turnbacks are complex, politically the issue is very simple for Labor. 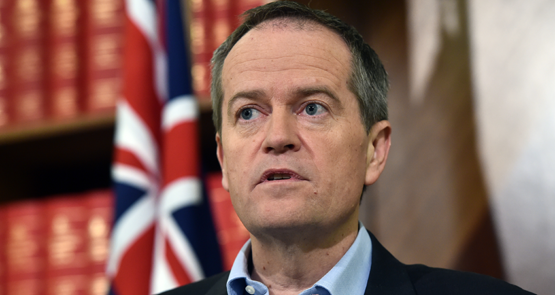 For Opposition Leader Bill Shorten, a party platform leaving the way open to continuing to turn back asylum seeker boats — which, incidentally, was flagged by Labor immigration spokesman Richard Marles as long ago as October last year — is a straightforward choice, whatever the outrage it might provoke on the left. In fact, it’s no choice at all, if Labor wants to be electorally viable.

A decision by the opposition to explicitly rule out an important element of the government’s successful policy to stop maritime asylum seeker arrivals would create the prospect of an entire election campaign centred on asylum seeker policy, with, at worst, the electorate waiting to punish Labor for failing to get the message about boats, and at best having the political space it wants to fill with discussions about its preferred issues being filled instead with talk of asylum seeker invasions.

Whatever the rhetoric from the left and refugee advocates, the electoral reality is fairly simple. There is a substantial group of voters — in April, more than a quarter — who still think the current government’s policy on asylum seekers is too soft. Another 34% think the current policy is appropriate. Twenty-two per cent of people think the current policy is too tough. Around two-thirds of that 22% are Labor voters. Even assuming all of them shift to the Greens on boat turnbacks — highly unlikely — their preferences will flow back to Labor anyway, except perhaps in a couple of inner-city seats where MPs like Anthony Albanese — Shorten’s rival for the leadership of the party in 2013 — are.

But the flipside of losing votes to the Greens is that more than a quarter of Labor voters think the current policy is too soft. Ruling out boat turnbacks has nearly as much potential to lose votes as embracing them — except the “too soft” votes, once lost, won’t flow back to Labor via preferences, because they’ll go to the Coalition. In short, the argument that Labor will lose votes embracing turnbacks doesn’t stand up.

If it’s politically a no-brainer, what about in policy terms? In conjunction with the policy of blanket refusing to settle asylum seekers arriving by boat in Australia, which Kevin Rudd initiated, offshore processing, which Julia Gillard restarted, the Coalition’s boat turnback policy has dramatically reduced the number of boat arrivals, albeit at serious cost to Australia’s relationship with Indonesia. It has thus curbed the loss of life among asylum seekers. The left argues that the government and hardliners merely use loss of life as a figleaf for their loathing of refugees, but that doesn’t change the fact that lives have been saved.

More problematically, the left is unable to offer a coherent and viable policy alternative if the flow of boats were to resume in response to a Labor government abandoning turnbacks. Does Australia return to allowing its humanitarian program to be self-selected by those with the resources to make a maritime journey to Australia or do we endlessly expand facilities on places like Nauru for asylum seekers to remain in permanent limbo, awaiting resettlement outside Australia? Does Australia offer a transit service from Indonesia for would-be maritime arrivals to ensure they arrive safely? If so, is this open-ended, or do we cap the places we offer and thereby condemn some to risk the sea journey?

“This is a subset of a broader issue: are Western countries morally obliged to take all refugees who can reach them.”

The left also argues that stopping the boats doesn’t have any net effect on saving lives, because it merely pushes the problem of refugee deaths at sea on to other countries in the region. It’s unclear what the hard evidence is for this assertion, but it raises a separate policy question — how far does Australia’s responsibilities re refugees extend? Should we become the regional policeman for maritime refugees, sending out a vast navy to collect refugees wherever they are at sea? In which case, do we dump them all on Nauru? And if so, will this merely stimulate more refugees to attempt to reach our region so they can be collected, and if so, how many will perish in the attempt? Once you invoke the issue of regional consequences of Australia’s actions, you can’t stop simply at the point that is convenient for your argument — you have to fully explore the consequences.

Refugees, and economic migrants, using people smugglers and unseaworthy boats are a worldwide problem. Australia can best help by lifting its humanitarian intake — which Labor proposed to do while in government, and which was mostly rolled back by the Coalition in an extraordinary act of callousness. Shorten flagged last night that Labor would again propose to lift the humanitarian intake in government, as it should — Australia can easily afford to take in 25,000 or even 30,000 refugees a year, despite the high cost of resettling refugees effectively. And we can run offshore processing on a far more civilised basis than is happening under the Coalition. Rather than operating a vast open-air sexual abuse camp, as we are currently doing on Nauru — in which we literally encourage child abuse and exploitation by covering it up and threatening to jail people who reveal crimes — we can abandon our policy of punishment by neglect and invest in a civilised, humane facility that offers asylum seekers a safe environment, health and education, as the Houston-L’Estrange-Aristotle report recommended.

This is a subset of a broader issue: are Western countries morally obliged to take all refugees who can reach them (putting aside people attempting to reach the West purely for economic reasons)? It’s a somewhat misleading argument, because only a small proportion of refugees ever reach countries in Europe, or Australia — the great majority of the burden of caring for some 3 million refugees from the war in Syria, for example, falls on Turkey, Lebanon, Jordan and Iraq, not the West (and remember, the great majority of refugees want to go home to a peaceful life, not move to another country where they don’t speak the language and have few connections, no matter how wealthy it might be). Even so, the number of refugees seeking to come to Western countries is higher than politically acceptable, especially in Europe, where unemployment is in double digits across the countries that have to directly deal with maritime arrivals. No amount of wishful thinking about somehow convincing electorates otherwise will change that.

And what is the moral imperative for an Australian policymaker? Their first priority is the interests of the electorate. For Labor, a choice between foregoing the opportunity to serve the electorate across the economy, health, education, climate change, housing and jobs in order to accommodate the interests of, perhaps, 20,000-30,000 people from outside Australia, is no choice at all. Governing is a process of dealing with infinite priorities with finite resources — and that includes political capital. It also means making judgements about the net good you can accomplish, both within the confines of one policy area and across all of them. In the absence of compelling evidence that boat turnbacks has unacceptable consequences, a policy of stopping boats while increasing our humanitarian intake is the least worst policy, moral and political choice.

Correction: this piece originally stated, in reference to the proportion of voters who think current asylum seeker policy is too tough, that “less than a third of that 22% are Labor voters.” This is incorrect — the actual proportion is around two-thirds, and the text has been amended to reflect the change.

Obviously Shorten needs to mimic Abbott’s most successful tactic. Just lie to the electorate to get into power and then do what ever you like. Seems to be working well for Abbott.

What evidence exists that lives have been saved?
Lives maybe/ maybe not have been saved in or near territorial waters, but those lives are still existant issies. Are you, Bernard (and the Government and Opposition)giving a blanket guarantee that anyone who may have arrived by boat is now definitively still alive? that they have not suffered from the situation they were escaping in the first place? Sorry Bernard, any statement of ‘lives saved’ is pure NIMBYism.

Oh, and as an aside- definitionally- if you are turning back boats, you have not ‘stopped the boats’ at best you can say ‘stopped the boats arriving’, which is a different thing, and leaves an equally high chance of people dying at sea.

I expect more from you Mr Keane.

Keane makes some good points here and offers a lot of food for thought for this lefty.

I do however think Australia ought to be a moral leader on this issue. We are much better equipped in terms of wealth and (supposedly) human rights to deal with displaced people than any other states in the region. Why can’t we accept 100,000 asylum seekers per year? Why couldn’t we choose to take a more active role in rescuing boats instead of returning them? Public opinion is obviously the answer here.

In current circumstances, perhaps sending the boats back makes factual sense but in our rich, massive country, which is also guilty of bombing the countries where many asylum seekers flee from, surely the moral argument is also relevant.

Totally agree with Bernard. There are a lot of Australians that believe any assistance needs to be in a measured way that is controllable. When the system is swamped then thing become chaotic to a point of un-manageable. A recent example of this is what happened with Italy’s open and compassionate actions of accepting boat people.

Who can believe the saving lives excuse?
However, if boats are turned back, callous treatment in the detention centres is no longer needed as a deterrent. Some quiet assurances about humane treatment would help pacify voters with a conscience.