The debate about economic reform is too often about self-interest. This week, two senior independent public servants have offered a more useful take, Bernard Keane and Glenn Dyer write. 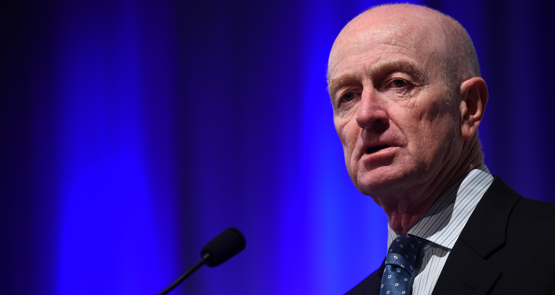 Everyone is having their say about the dearth of economic reform and why our current generation of politicians appears to be incapable of undertaking it.

Yesterday it was Reserve Bank governor Glenn Stevens’ turn, in his annual speech to the Anika Foundation, a charity dedicated to youth depression and suicide that Stevens has long supported. During his speech each year the central banker strays just a little from his normally reticent mode of public address to open up a little about broader economic matters, ensuring maximum attention to an important fundraiser.

The result was a cogent explanation of both the substance and the politics of reform — from a non-political perspective.

Stevens’ first point was a subtle hint to drop the kind of gloom-and-doom narrative that tends to accompany reform arguments — something that even the RBA itself has occasionally been guilty of, and that the business community and commentators (especially conservative commentators) tend to reflexively engage in — i.e. that a Greece-like scenario is just around the corner unless we slash wages/cut the deficit/work harder, etc. “Perhaps we might be allowed to conclude that we have been meeting some of our challenges, thus far, with outcomes that, while not perfect, are not too bad,” Steven said. “So there are reasons to feel more confidence in our future than we often seem to. The question to be asking is how we build on the broadly successful record we have in order to secure prosperity in the future.”

And framing is important — why are we reforming? Stevens: “I would suggest that the case for ‘reform’ needs to be presented as a positive narrative for economic growth. We all know that competitive markets, investment in education, skills and infrastructure, and adaptability, are key parts of that growth narrative.” That is, reform isn’t some hair-shirt exercise we need to undertake to address some national laziness or self-indulgence (again, the kind of narrative that pervades some reform commentary), but is about making things (even) better.

Stevens also mentions an issue that tends to be absent from the economic reform debate — innovation, which successive Australian governments of both persuasions have failed to really nail:

“These reforms matter because of the gains to incomes resulting from better allocative efficiency. But they also, ideally, would support entrepreneurship and innovation — ‘risk-taking’ by another name and of the kind we want. Measuring ‘entrepreneurship’ is not straightforward and various studies have somewhat differing results. At the risk of oversimplifying, one might say that Australians hold our own in the entrepreneurship stakes, but since we don’t generally score at the top in such surveys, there must be scope to improve. That too can be part of the growth narrative — the narrative of how we build on the success enjoyed to date and secure an even more prosperous future.”

That goes to a question that occupies much of the rest of the speech: is Australia facing a lower growth rate than the one we have been used to in recent decades — below, rather than above, 3%? In the absence of a mining boom, that leads to the question of how we lift growth without relying heavily on new housing construction, which is more or less what we are doing currently. How do we encourage the innovation and risk-taking that will drive growth in other sectors?

Even so, Stevens warns that it’s important to recognise the need to balance growth and equity and environmental considerations — something that seems not to interest the current government:

“Many would be concerned to reduce our environmental footprint. They would not wish to sacrifice civilising aspects of our society and culture, including many that result from government intervention. But nor will they accept a future in which they are marginalised in the global village because of unwillingness to adapt or to invest, or because of a failure to foster a growth economy.”

This is all easily said than done, but it is a step up from the contribution on reform from Treasury secretary John Fraser, whose recent speech added little to the debate and seemed preoccupied with a specifically ideological reform agenda, rather than the kind outlined by Stevens. And it’s impossible to imagine Tony Abbott offering a narrative of reform in these terms: it requires balance, nuance and a resistance to overstatement, whereas Abbott’s forte is aggression and wild, negative overstatement — it’s barely a fortnight since he warned that any change to negative gearing by Labor would “destroy” the rental markets in capital cities. Abbott doesn’t have the vocabulary of reform — things are perennially on the verge of destruction, or wipeout, or facing a cobra squeeze or a python strike, and must be stopped, and repealed, and halted, and can’t be trusted. Asking Tony Abbott to sell complex reform is like inviting a heavyweight boxer to perform surgery.

Much of the debate about reform is simply a glorified statement of self-interest. Witness the business lobby emerging yesterday to denounce Mike Baird’s 15% GST proposal because revenue would flow to hospitals and schools, rather than funding company tax cuts, or the Coalition backbenchers who want the money to fund income tax cuts to bolster the government’s re-election chances (and their chances of holding onto their seats). Genuinely independent outfits like the Productivity Commission get ignored until they say something that favours the narrative of one side or another. On Tuesday, the head of the PC, Peter Harris, gave the Joint Select Committee on Trade and Investment Growth, which is looking at how business uses preferential trade agreements (misnamed “free trade agreements” by the government) a history lesson on trade and tariff reform, how it had been achieved and the importance of transparency in that process:

“It does a nation no good in the long run to add to the cost of doing business and employing Australians by making imported goods and services more expensive than they need to be; nor to congratulate ourselves on obtaining slightly more export access to another market in return for that. The transactions involved are complex. And they mix short-term export improvement in goods trade with long-term cost exposures across the economy. The net gains may be positive, but how would we know? Detailed analysis is simply not available. Of course, the Productivity Commission would prefer that we unilaterally reduced our trade barriers. And yet we are naive to suggest this, apparently. Despite the fact that this is what Australia did, with clear net benefit to the economy, in the 1980s and continuing through the 1990s … All our previous analysis informs the views that we will put to the Committee today. The consistent finding …  is the need for greater transparency of process …”

And Harris went further and outlined, in detail, an assessment process by which significantly greater transparency and benefit-cost analyses could be brought to bear on trade agreements like the dreadful Trans-Pacific Partnership the government is hell-bent on signing up to. Harris ended his remarks by saying that he didn’t much care whether the PC took on the work, or someone else did — provided it got done. But don’t expect the government, which likes to sign trade agreements in near-total secrecy and then accuse any critics of xenophobia, to take up Harris’ proposal.

Between them, Stevens and Harris have illustrated that the reform debate needn’t be about self-interest, and that there are concrete ways of actually achieving it — if politicians and others are prepared to put party interest aside for five minutes.

Bernard, an interesting read detailing the lack of potential for real economic reform. Would you care to comment on the success of the UK Tonnage tax system, which had the effect of increasing UK registered shipping tonnage, retaining essential skills for an Island nation with a historic maritime trading history and task and also raised and continues to raise significant revenue. What a difference to a lazy broad based grab for a further 5%, such as what has been recently ventilated, by Mike Baird. For your reading pleasure
http://www.maritimeuk.org/wp-content/uploads/2012/08/Maritime-UK-tonnage-tax.pdf