Barnesy working hard to make a living, but Reclaim Australia have done the right thing

Jimmy Barnes has not said he is suing Reclaim Australia for promoting an anti-tolerance message he abhors. But he still could. 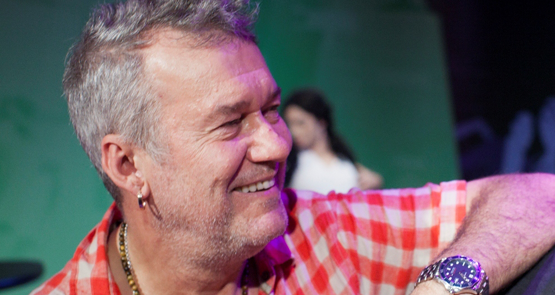 In news that will afflict no heart save for the especially pickled one of my racist Uncle George, representatives of Reclaim Australia are today “deeply saddened”. Following a Facebook post by Jimmy Barnes in which the singer said he did not support the group, which had been using his recorded materials at events, RA are all cut up. Their despair is not troubling, but it is a little surprising. Any true fan of Aussie rock would know that Barnes, who has a migrant wife and is himself a migrant and came to musical maturity in a community of artists who were almost entirely migrants, is hardly likely to support an anti-migration stance.

One cannot legitimately call oneself a Chisel fan and therefore a truly proud Australian without learning these album notes by heart. The Easybeats, AC/DC, and the Bee Gees are among the many Aussie Legends who arrived by boat with their impoverished families. Without migration, Barnes, who was absolutely raised in the musical circles that had formed in the huts of migrant hostels, would have no career. Without migration, this rock nation would never have made the long way to the top of the only art in which we’ve ever excelled, and no one would’ve heard even one of the three glorious parts of Evie. Without migration, especially that from Greece, we’d never have played one decent note of surf guitar.

If the Villawood immigration detention centre has ever put any good into this world, it’s in its introduction of Vanda to Young. But of True Aussie Rock, which is nearly all migrant rock, enough flag-waving. Flag-waving, after all, is a practice so utterly diminished by the hateful, if hazy aims of RA that it has become impossible.

But what is still possible is for news outlets to distort Barnes’ initial post. Thanks to the reliably poor ability of News Corp journalists to translate from the original English, Barnes is now characterised as someone who has “insisted” that RA cease using his materials — or, let’s be honest, probably Don Walker’s — at their Nuremberg-lite gatherings.

At this time, Barnes is not seeking to injunct the use of his works. His Facebook post was not a self-important roar, of the type we lately hear from butt-hurt billionaires who seek impossible control in reproduction of their work. Artists don’t always get to decide where their music is played, and Barnes, who has been around, likely knows this. He is possibly also aware that there is a tariff category that permits anyone with a handful of dollars to purchase the rights to reproduce his work, or any musical work, at a public event. The exchange is one of music licence for money. It’s a financial and not an ethical trade.

Barnes’ post was not a cease-and-desist. It was a statement that he was not affiliated with the group. If any one of us found our likeness or our works used in the service of a group inimical to our own views, we’d be likely concerned to correct that impression.

At this stage, Barnes has taken no action other than that of a Facebook user who has an entirely legitimate case of the shits. But even though he has thus far chosen not to pursue it, he may have legal recourse.

Julian Hewitt, senior partner at Melbourne’s Media Arts Lawyers, says it may be hard for Barnes to show there has been an infringement on his Moral Rights, a relatively new set of protections under the Copyright Act that safeguard the creators of artistic works from derogatory or misleading use of their works. “It hasn’t been tested by the judiciary here, so we don’t have any guidance from the courts as to how broadly they would be willing to interpret the legislation,” says Hewitt.

There is no current need for Barnes to seek an injunctionbecause RA have agreed, without being directly asked, to stop playing his music. However there may be other legal courses of action available for Barnes.

“Reclaim Australia cannot use the music attached to any vision, so for a TV commercial, online video etc without the approval of the rights holders, so if they have done that then it would be fairly straightforward to show a breach of copyright. There may also be a passing off claim — but thiswould be contingent on how strongly associated Barnes and Khe Sanh had become with the political campaign,” says Hewitt “and whether an ordinary person would assume the parties have a commercial relationship or have entered into some kind of agreement relating to the use of Khe Sanh by Reclaim Australia”.

There have been successful actions by well-known Australians passed off as advocates for brands. Proprietary interest in the identity of a celebrity can land you in a common law pickle. When, for example, swimmer Kieren Perkins had his photograph used in a 1996 print ad, he successfully sued Telstra in appeal.

It would be interesting to see an artist such as Barnes take action against a group that seeks some hard-to-detect political benefit and not, as is overwhelmingly the case in passing-off actions, a financial one. But it seems unlikely he will do so. They guy is not, as News Corp claims, kicking up a real fuss and he is not, as The Guardian claims, the victim of a property misuse that is exclusively right-wing.

It’s true that John Cougar Mellencamp, who curiously describes himself as “as left-wing as you can get”, has had his works targeted time and again by Republicans who mistake his bastardised Springsteen for US nationalism, and it is also true that during the 2012 primaries, the Silversun Pickups sent Mitt Romney a cease-and-desist. Actually, Republicans have been better than anyone at taking property, sometimes without adequate permission. But it is also true that Cyndi Lauper requested that Democrats stop using her song True Colors in a negative ad. So you can be stolen from by the centre, too. Even though Lauper made her disapproval of Mitt Romney, the ad’s negative target, clear, she said that she felt Romney could do a good job of disgracing himself all on his own.

The Dems removed the ad and apologised. And, misguided as they may be in every other way, it seems that RA has done the same for Barnes. Sure, they picked the wrong guy. And sure, as the Graun is at pains to say, RA rallies appear to be largely attended by those who never got to do a cultural studies unit and therefore really appreciate the meaning of Khe Sanh. (Although to claim, as people have, that Khe Sanh is up there as a protest anthem with Born in the USA is not to appreciate the difference between The Boss and everyone beneath him.)

But it seems to me that Barnes and RA acted, unlike Facebook rabble and news media, honourably and with a minimum of kerfuffle in this case.

Well, as long as RA paid their licence fee to use the music of Chisel.

I was unable to determine before deadline if RA had paid the necessary fees to play Khe Sanh in public. My failure should by no means dissuade interested others from calling APRA or the PPCA just to make sure, you know, that everything is in order and that the group hasn’t been so negligent that they are forced to pay back licence fees, fines or damages.

Christ what a waffle. Send that one back for a heavy edit. Wake me up at the end won’t you.

Don’t be so harsh, Peter, after all Crikey has become more an entertainment site than one for analysing serious social questions.

If you mean TL;DR say so, Peter. Me, it took a couple of minutes to read that I don’t begrudge. I don’t insist that everything be reduced to a twitter like sound bite.

Actually, I thought it was quite a succinct and enjoyable Razer piece – even with the big words. Perhaps she should dumb it down even more, though, to the length of ‘Khe San’ verse 2.

Spose the point is, who cares ? So what if they’re using Jimmies toones, big deal. Maybe deserves a line or 2 in a tweet. But lets at least give her credit for getting the big scoop on this one.