It turns out it would be vastly cheaper to treat asylum seekers like actual human beings and provide proper housing and education services. But the Department of Immigration still says Nauru is a bargain.

How much are you, the Australian taxpayer, paying to keep desperate people in hellish camps indefinitely, where they are denied access to basic medical care, live in constant fear of regular rape and sexual abuse, and provided hope only that they might be released from their island prison and sent to a Third World country lacking in infrastructure and run by an authoritarian government whose own human rights abuses are well documented?

The answer, according to Monday’s Senate committee hearing into the conditions in the asylum seeker detention centre in Nauru, is $645,726 per asylum seeker during an 11-month period, or almost $2000 a day. It would be vastly cheaper to give each asylum seeker free housing, enrol each one in public school, or even house each one in prison. 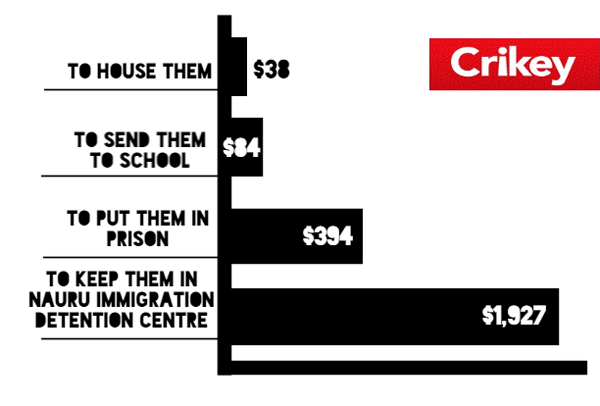 If instead of keeping asylum seekers in detention on Nauru the government decided to imprison them in the most expensive prison system in Australia, it would cost less than a quarter as much. According to 2013-2014 statistics from the Productivity Commission, housing inmates in the ACT, the most expensive jurisdiction in Australia, costs $394 per inmate per day.

And if the government wanted to give asylum seeker children a decent education instead of forcing them to live in unsafe conditions with sexual predators, that would also be much cheaper. According to 2011-2012 data from the New South Wales government, it spent $14,123 per full-time primary student per year and $16,749 per full-time secondary student. This equates to around $84 per day.

The government could also afford to give each asylum seeker free, normal accommodation on the mainland and pocket more than $400 million in change. According to the 2011-2012 Australian Bureau of Statistics figures (the most recent available), Australians spend an average of $38 per day on housing. 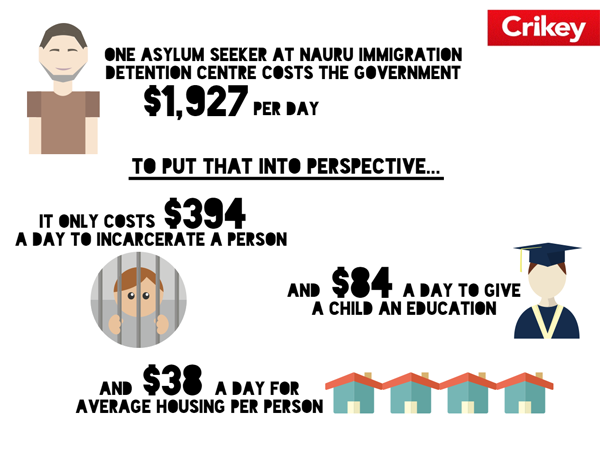 Department of Immigration and Border Protection Secretary Michael Pezzullo indicated that unless there was evidence to the contrary, the government was getting value for money in detaining asylum seekers in Nauru for the estimated $1927 per day cost.

“I am not in a position to agree or otherwise,” he told the committee. “As to whether I am comfortable with it or not, that is a function of whether we are discharging the implementation of the government’s policy and doing it on a value-for-money basis. My contention is that we are — which is, no doubt, subject to the discussion we will have over the next hour or so. Is it lawful, ethical and value-for-money expenditure? Unless I get presented with evidence to the contrary, the answer is yes.”

Transfield Services said that it was receiving $1.2 billion for its 20-month contract with the Department of Immigration and Border Protection for running the detention centre.

Chair of the committee Labor Senator Alex Gallacher indicated that the committee would be closely examining why the expenses had not been referred to the Public Works Committee.

“I raise that extraordinary per capita expenditure because we as a committee have decided that there has not been proper transparency in acquitting taxpayers’ funds by the lack of referral to the Public Works Committee. That is a matter that will be mentioned in our deliberations, but it is a separate matter,” he said.

Nothing but Nothing justifies the abuse, conditions of Nauru and Manus. $700,000 per annum to destroy people.
Before the deniers begin
Try to make a 9 week old baby smile- too depressed in detention to smile.
Mothers on suicide watch in Melbourne – 2 in Psych hospitals 4 in detention after nearly two years on Nauru.
A 6 year old saying- i am scared my mum is dying
Children lurching from laughter to tears in minutes
Fighting one minute throwing them selves into adult arms the next
A three year old screaming at the word Nauru NO NO NO

This has to stop – it is not just about money. Putting women and children in the hands of sexual predators places this nation beyond redemption. Secrecy and shame has protected the politicians until now. It will not last. They Know what is being done in our name- many Australians do not yet know.

Let me start by saying that I hate the lack of human compassion involved in offshore detention and I desperately want Australia to find a better solution and improve our national attitude. That said, your article is not a fair comparison.

Offshore detention has rightly been a deterrent to additional asylum seekers coming to Australia by boat, and while the cost per detainee is high, because it has stopped the number of arrivals, the overall cost is low.

It might cost around $2k/day to keep 694 asylum seekers on Nauru, but there were an average of 56 arrivals per day in 2013. If we kept them all in a mainland prison, at a rate of 56 arrivals per day, the number of asylum seekers in prison would balloon to 3,500 in just 50 days, and the overall cost would be the same as keeping 694 on Nauru. After another 50 days there would be nearly 7,000 in prison and the overall cost would double… etc etc. The same theme applies no matter what sort of accommodation they are offered. Sure, if you put them in a house it would cost less per asylum seeker, but surely the number of arrivals would swell, and surely the number of arrivals dying at sea would swell with it.

Josh I hope you’re never in charge of running costs at anything other than a small household.

I think the process is not based on cost effectiveness but on deterrence. Quite amazing how costly it is though.

Disgusting on all levels. All Australians should be ashamed of this. Idiot ALP will continue it on.