Third time lucky? Remember that late election donation disclosure by Bill Shorten that was all anyone could talk about a fortnight ago but that is now, strangely, forgotten?  We reported last week that the amount Shorten, or more legally correctly the Victorian branch of the ALP, had neglected to disclose wasn’t $40,000-odd but closer to more than $65,000. Well, since then there’s been an update. The original disclosure, sent two days after Shorten’s royal commission appearance, reported $42,968 from the AWU Victorian branch and $12,587 from labour hire company Unibuilt (paid before June 30 that year, so it was reported for the 2006-07 period), to cover the salary of Lance Wilson, who worked on Shorten’s 2007 election campaign. In addition, it also revealed a donation from the national AWU of $11,774. Well, last week the Victorians sent an amendment to that declaration to the AEC. According to that, the national AWU donation was actually $12,238 and the Victorian AWU donation was lot smaller, at $13,311. And now there’s a second Unibuilt donation, of $30,237 — which is around $500 shy of the difference between the Victorian AWU figures. So, Unibuilt paid for most of Wilson’s salary, it seems, rather than the AWU Victorian branch. That brings the undisclosed, eight-years-late amount to $68,373. And it still took them two goes to get it right — assuming there are no more amendments.

Vale Don Randall. The Australian political community was shocked to learn of the death of WA Liberal MP Don Randall from a suspected heart attack yesterday. While his colleagues have paid tribute to him, and many remembered his habit of attracting controversy, we turned to his maiden speech. While most maiden speeches focus on the MP’s history, the history of their electorate and their plans in Parliament, Randall did all of this and managed to fit a swipe at the ALP in his first speech in 1996:

“Finally, the worst thing that could happen to Australians is if they begin to believe, to quote the former Prime Minister, that ‘this is as good as it gets’. Very rarely do we reach that point where there is no more to strive for, that all has been achieved. The Australian people have clearly shown that they expect better than they have received in the past 13 years. Clearly, the time for change is ripe — changes towards greater individual responsibility and reward for effort.”

Fundraisers are usually held in a politician’s local electorate, or, failing that, the city centre, which is a nice central place for high-profile out-of-town guests like Plibersek to get to. Not so this fundraiser. It’s being held in Northcote, 20  minutes’ drive from the CBD at best, and, more pointedly, in the federal seat of Batman, held by Labor Unity patriot David Feeney. Labor Right sources whisper that Feeney was none-too-pleased about this — his office apparently wasn’t even informed about the fundraiser until it was advertised.

In Giles’ defence, there’ll be plenty of hipsters keen to hear Plibersek speak in Northcote. On a two-party preferred basis, the electorate is narrowly split between Green and Labor voters, and one presumes Plibersek will have plenty of supporters in the area. Not that this is being held in Giles’ favour by Unity figures, who are saying that if Giles is so keen to court the Greens vote, maybe he’d do more good holding the fundraiser in the seat of Melbourne instead (held at both a state and federal level by the Greens). Giles has already held one fundraiser this year with a high-profile colleague — Anthony Albanese’s gig in Carlton earlier this year was a fundraiser for the MP. We could make a joke about how no one would turn up to a fundraiser in Melbourne’s outer-northern suburbs, but that wouldn’t be very fair. 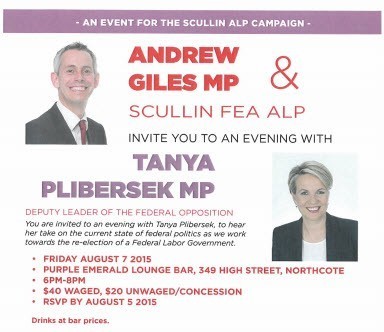 Possible war criminal? Come on in! Last year we reported that a former Indonesian military leader alleged to have been involved with war crimes had been invited to speak at a conference marking the 15th anniversary of the Australian intervention in East Timor. Lieutenant General Kiki Syahnakri was the martial law administrator in East Timor before Australian forces arrived in Dili in September 1999. An indictment was filed against him in 2003 for the crimes of murder, forced deportation and persecution, but these were no barrier to Syahnakri entering the country last year, answers given to Senate estimates show. Senator Nick Xenophon asked Immigration officials how Syahnakri was allowed into the country and what he answered to the question “Have you, or has any member of your family unit included in this application, ever committed, or been involved in the commission of, war crimes or crimes against humanity or human rights?” but out of nine questions, five answers included the phrase “For operational reasons, the department is not able to disclose details about specific cases”. The department does hold a record of people “of immigration concern to Australia”, but says that just one person indicted by an internationally recognised court or tribunal has been granted entry to the country since 2003. There are no records prior to then. Is that one person Syahnakri? We’re sure that’s an “operational matter” as well.

Merger talk again. Earlier this week we received a tip that a merger for the University of Adelaide and the University of South Australia was back on the cards, but both unis told us they did not want to merge. Now it appears that it wasn’t on the universities’ agenda, but the South Australian government isn’t quite on the same page. According to a report by Channel Seven, 37 government documents were produced in March alone about the possibility of amalgamation. So where there’s smoke, there’s fire — even if the unis are doing their best to stamp it out.

Guess who’s coming to dinner. The Clifton Hill branch of the ALP has decided to aim high for the next guest at its fundraiser, asking Speaker Bronwyn Bishop to turn up and speak on the topic “what role will the Westminster system play in an Australian Republic?”. Bishop is a monarchist, and the branch’s Facebook page says they don’t have anywhere to land a helicopter, so we doubt their invitation will be accepted. 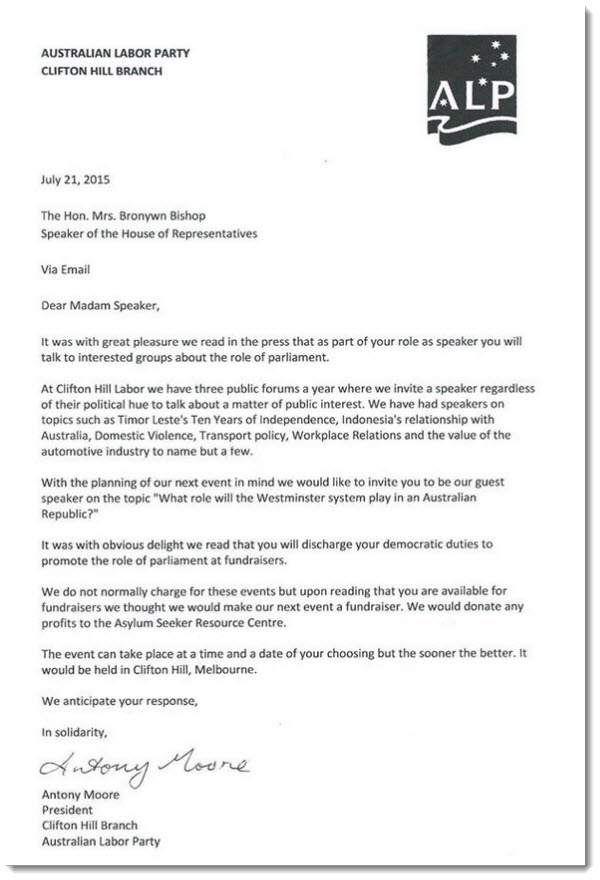 Suddenly we hear what a god bloke Don Randall was. Indeed, ‘colourful’ is apt.

I hope we get an update on Bronnie’s response to Clifton Hills.

Poss – I would give points to anyone who discomforted Abbottrocious.