Bill Shorten's higher RET is intended to exploit the gap between voter enthusiasm for renewables and Tony Abbott's pathological hatred of them. But it's not the best way to achieve decarbonisation. 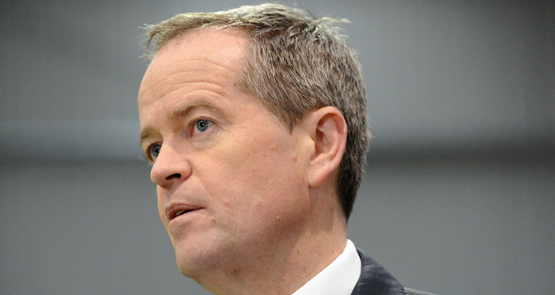 Voters love renewable energy. They love it as much as the Coalition hates it. Even Liberal voters love it.

Just yesterday, we saw that even 39% of Coalition voters think the government should be backing renewables over coal; 56% of Labor and “other” voters also think so. More than half of voters want more support for wind farms, large-scale and rooftop solar. Voters also think renewables are better for the economy, jobs and, crucially, electricity prices. And a third of voters think the Renewable Energy Target is too low — and that was before Labor did a deal with the government to reduce it. That includes 19% of Liberal voters.

What’s especially interesting about this enthusiasm is that efforts to link renewables to higher energy prices has failed badly. Right-wing commentators, the business lobby and the government itself all claimed the RET was forcing electricity prices up. Unfortunately, the government was humiliated by its own RET review, designed to be the basis for killing the RET, which found that even with anti-renewables assumptions built into modelling, it would lead to lower energy prices, not higher ones. The contrast with a carbon price — whether tax or ETS — is significant: voters understand there’s a price impact of any carbon price, whereas they see more investment for renewables as something that costs them nothing, because either governments are doing the investing, or because power companies are being forced to provide it. Politically, it’s a victimless crime.

Thus, the government’s evidentiary basis for its war on renewables has shrivelled to arguing that wind farms look ugly and wind turbine syndrome is real.

Bill Shorten’s proposed 50% RET by 2030, revealed by Fairfax’s Mark Kenny, is designed to exploit this huge gulf between the coal dust-fuelled delusions of Abbott, Hockey and Co. on renewables and the stated, and increasingly the demonstrated, preferences of voters for renewable energy. It will allow a lower-impact ETS, and higher carbon abatement targets than the risible 5% bipartisan target currently in place.

It also exploits the fact that the government, run by a clutch of climate denialists, has nowhere to go on climate action. It’s already relying on dodgy international emissions accounting to be able to reach the 5% target; to reach anything more ambitious, such as a 10-15% type target of the kind it might try to announce prior to the Paris climate conference later in the year, it will have to scale up its discredited Direct Action policy by several orders of magnitude, costing the budget billions of dollars. “Direct Action”, too, exploits the fact that voters prefer an apparently cost-free way of carbon abatement, but unlike renewables, no one has ever bought it. Just 10% of voters back “Direct Action”, with Liberal voters every bit as hostile as everyone else.

How economically efficient is a stronger RET, though? As Ross Garnaut succinctly put it in his submission to the RET review:

He also pointed out that a RET doesn’t encourage lower emission fossil fuels (i.e. gas) over emissions-intensive fossil fuels like coal, in the way a carbon price does. As he went on to note, of course, we no longer have any carbon pricing to carry the burden. Under the sort of scheme apparently to be proposed by Labor, a RET would do much of the work of decarbonisation rather than a higher-priced ETS, and do it less efficiently and with less support for cleaner fossil fuels.

But that’s the economic price to be paid for the rabid campaign against carbon pricing by Tony Abbott, News Corp and other climate denialists. Perhaps the Business Council and other ostensible advocates for more economic reform can make the case for a carbon price over a bigger RET?

Not sure that this amounts to dumb economics, but perhaps not the absolute primo economic settings. On the other hand, most pure economic measures don’t actually work in the real world. Certainly not dumb compared to Direct Action, which is even dumber than doing nothing at all.

But certainly good politics, and good policy. Just hard to understand why the coalition isn’t on board, the rest of us are rapidly coming to that conclusion.

Maybe the super-RET policy will cause the Coalition to come out in favour of a more economically efficient market-based “carbon price” as an alternative.. 🙂

Bernard, coming home on a late night train from a Labor Forum which did everything except address the underlying difficulties with the glorious schemes they espoused, I got into a carriage full of commuters who shared your views on renewable energy. They all wanted an end to using filthy fossil fuels, and when I suggested that their cheap train fares, and possibly the funding for many of their jobs came from Australia’s mineral sales they responded with beliefs that we’d find a way to run trains without using fossil fuels. None of them however made any reference to what would happen to so many jobs if we took the Faux Conservationist paths both you and they cherished.
I’ve asked before can anyone (including you of course) refer to what you see as “Tony Abbott’s pathological hatred of (renewables).” When will I get a meaningful response to my request?
As the song says, “Perhaps (not even by) the 12th of Never, and that’s a long, long time.”
That could be almost as long as the Crikey Censor takes with even my gentle helpful suggestions to the Crikey Commissariat.

I thought that shorten said that labor will be having an ets as well.
Abbott said in an interview recently that he hates wind farms and that he was trying his best to do away with them, fairly clear I would have said Norman.

It’s great news that investment in renewable energy leads to lower prices. That means the government no longer needs to subsidise it