After claiming over $5000 in parliamentary entitlements for taking a chopper from Melbourne to Geelong, Speaker Bronwyn Bishop has been placed on probation by Prime Minister Tony Abbott and as a result will have to have a supervisor pilot in the passenger seat at all times. That’s probably not true, but questions over the “age of entitlement” and what a probation means has pushed the Speaker and Shadow Minister for Finance Tony Burke into our top 20 this week, with Bishop topping the index in broadcast media and just ahead of the PM overall.

New South Wales Premier Mike Baird has called for a rise in the GST to 15% ahead of a pre-COAG leaders retreat, with South Australian Premier Jay Weatherill also making “supportive noises” according to Fairfax. Victorian Premier Daniel Andrews and Queensland Premier Annastacia Palaszczuk have suggested raising the Medicare levy instead, and enter our top 20 mid-way in ninth and 10th place respectively.

Federal Environment Minister Greg Hunt is standing by the existing renewable energy target of just over 23%, as Opposition Leader Bill Shorten — down one place this week in third — is set to unveil a climate policy goal requiring half of Australia’s large-scale energy production to be generated using renewable sources within 15 years.

Queensland LNP member George Christensen joined the Queensland Reclaim Australia rally to tell supporters that Australia is at war with radical Islam, and said he was disappointed but not surprised by the “outrage”his decision to speak at the rally generated.

Western Australia Liberal MP Don Randall died of a suspected heart attack yesterday, after being found unresponsive in his car, with the PM remembering Randall as an “outstanding local member” and tributes on Twitter. And we can all breathe a quiet sigh of relief, as criticism of ABC’s Q&A fades slowly from the spotlight and Communications Minister Malcolm Turnbull drops out of our top 20. 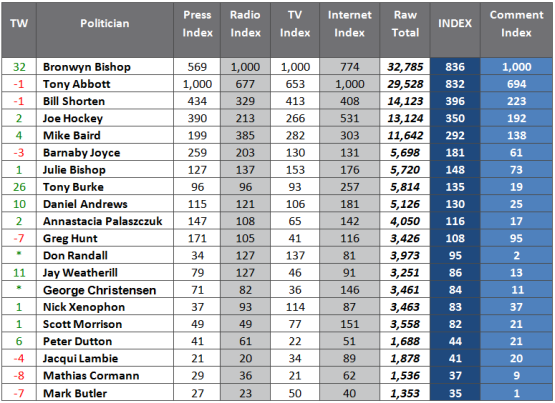 Memes aplenty this week, with my personal favourite being Madame Speaker “watering her garden” via chopper. If you’re going to do something, you may as well do it right.

Huge week on talkback this week, specifically for Madam Speaker, over parliamentary entitlements and the GST.

Exactly what does “probation” mean in these circumstances?
Is she restricted in any way?
Does she have to report to a “probation officer”?
Is there a test to pass before she comes off her “probation”?

It’s all so ambiguous.

Maybe they have too many entitlements. Maybe its all gone to their head, with “entitlement” becoming as normal as breathing. “Let them eat cake” is the attitude we see when looking in from street level.