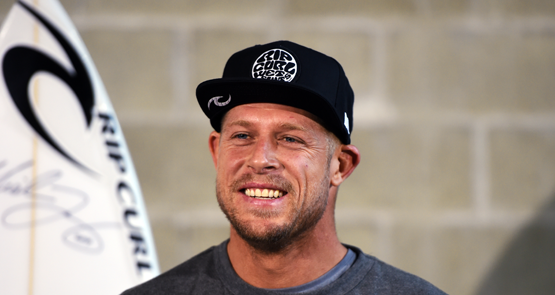 Yesterday afternoon, Australian journalists turned out in droves to hear surfer Mick Fanning speak about encountering a shark during a surfing competition on Monday.

Around 150 journalists turned up, according to The Guardian (by comparison, about 100 journos attended Joe Hockey’s budget night press conference, while Tony Abbott gets about 20 on an average day). Fanning and opponent Julian Wilson, who attempted to help Fanning when he saw the shark, were flanked by their surfboards, which prominently displayed the Red Bull logo as well as an endorsement for surf brand Rip Curl. Taking the branding even further, Wilson wore a Red Bull cap while Fanning wore one emblazoned with the Rip Curl logo. Both were carrying cans of Red Bull, which they drank from periodically. At the conclusion of the conference, Fanning placed his can on the stool, but a minder handed it back to him as he walked off the set.

Fanning, who made $2.7 million last year according to BRW, is sponsored by Red Bull and Rip Curl, and gave his first interview after the event not to the mainstream media, but to Red Bull’s own marketing team, which published a Q&A with him early on Tuesday.

The prominence of sponsor’s logos raised eyebrows in the mainstream press, but the fact that Fanning and Wilson were so emblazoned is nothing out of the ordinary for a surf conference, says Surfing Life magazine’s editor-in-chief Wade Davis. “They’d be required to display the same amount of branding no matter who they were facing and for what,” he said, noting there was “nothing untoward” about that level of logo flashing for a surfer.

But it wasn’t just the surf media watching the conference. Both Sky News and ABC News 24 carried the conference live and in full, beaming Fanning’s sponsors to the world. This was tricky for the ABC, because as a public broadcaster it’s not allowed to carry advertising. One presumes it tried to get around this by cropping the feed of Fanning far more closely than Sky News did — Fanning’s board wasn’t always visible in the ABC broadcast. But it had to show his Rip Curl-branded hat. “ABC News does not participate in product placement, does not agree to provide commercial visibility in return for any considerations and does not deliberately use the ABC to promote commercial interests,” an ABC spokesperson told Crikey this morning. “We try to avoid logos appearing when we possibly can, but sometimes we get little choice.”

Sky News has more leeway to air branding but also has the capacity to put press conferences on its digital Foxtel multichannels, as it frequently does when a conference drags on or provides little news value. Asked why Sky News aired the conference for so long (it went for about 40 minutes), CEO Angelos Frangopoulos said the story was of “huge international interest”, and noted Sky News wasn’t alone in making that editorial choice. 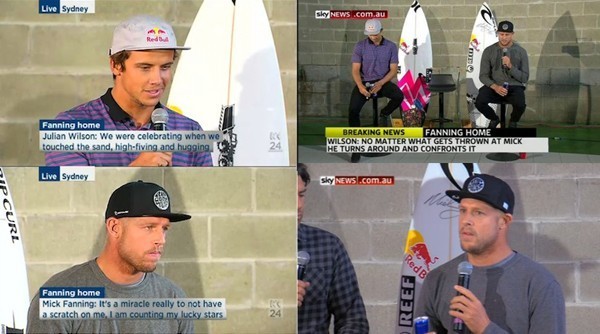 Rip Curl and Red Bull have scored a marketing coup, with the coverage worth hundreds of thousands of dollars, the head of media buying agency UM Australia told Crikey this morning.

“Forty minutes on both Sky News and ABC news would be worth about $200,000 for each of the brands visible during the telecast,” UM Australia CEO Mat Baxter said. He notes, however, that Red Bull probably got more out of it than Rip Curl, because what Fanning went through closely resembles the energy drink’s own brand positioning. The energy drink’s marketing wisely ignores the taste of the repellent beverage and focuses on its excessive amount of caffeine, supposedly giving drinkers the ability to perform extreme feats.

“The superhuman feat of Mick Fanning punching a great white shark that’s trying to attack him and coming away completely unscathed is probably the history’s single best example of extreme sport — something the Red Bull brand is all about,” Baxter said. “Fanning’s worst nightmare is an energy drink marketer’s dream.”

“I can almost see their next ad campaign now — drink Red Bull and fight off shark attacks with a single punch.”

It’s unlikely Fanning was paid any extra money as a result of the prime-time coverage he secured for his sponsors, according to celebrity manager Max Markson. “Celebrities get a fee, and then, extra money for success in their field.” For Fanning, that means he reaps dividends for doing well at surfing competitions, or improving his ranking. But the contract he’s on right now probably doesn’t account for near-misses with shark attacks. “A situation like this, from a sponsor’s point of view, is of course a windfall. He got incredible coverage,” Markson said, though he notes it could have gone the other way. If Fanning had been injured or killed, his sponsors would have lost their star.

Not that Fanning doesn’t gain from this in the long term. “What happens now is when they renew the sponsorship, they’ll up the money. He’s a much bigger name now.”

Well, it was newsworthy, 150 journos don’t turn up for anything in those numbers other than a free drink.

And having established that, it is hardly an issue for the ABC to try to cut out every piece of advertising. While it was great for marketing purposes, it hardly seems necessary to point out that there was free advertising on ABC and Fox.

A bit of a storm in a teacup.

Myriam, how do you believe we should try to increase the serious evaluation of important issues without the media trivialising issues in order to improve ratings, gain more advertising, etc?
Perhaps It’s Time” for Crikey to set an example?

I never noticed the Red Bull or Rip Curl logo. I was mesmerised by how bad the hats looked, both young fit handsome, with hats that made them look like dorks!

He was attacked by and fended off a Jeffrey’s Bay shark.
Me, I’d be shark poo now, how about you?

I’m so old that I remember when we surfed for fun, the thrill of mastering Nature’s power and the admiration of peers & pretty, potential partners.
Seems like another planet.