The Oz analyses Labor Twitter, reckons there’s a spill on the way

The Oz uses all the investigative journalistic skills of someone stalking an ex's Facebook page.

Retweets equal endorsement? Is it on? It could be, according to the front page of today’s Australian, which has carefully analysed the tweeting patterns of Labor veteran Wayne Swan to come to the conclusion that the former treasurer supports Deputy Leader Tanya Plibersek in a leadership challenge against Bill Shorten. How can we tell such a thing? Because Swanny has retweeted Plibersek a total of four times in the last four months, as well as turning up to the same event in Ethiopia last week. 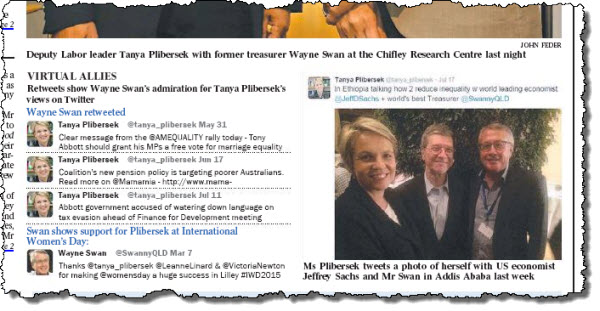 While many people would see this as a long bow to draw, we wondered if the theory could be applied to other politicians — how many pollies are forming unlikely alliances and subtly letting us know through Twitter? With a level of scientific social media analysis that would rival a teenage girl raking through her ex’s Facebook photos for evidence of a new squeeze, we have uncovered leadership plots all over the place — just through the power of retweets. Labor MP Tim Watts has ruined all the fun by tweeting this morning “PSA: My RTs do not equal leadership endorsements”. Watts is a frequent retweeter so we’re glad for the warning — otherwise he could be supporting Bill Shorten, Plibersek and Joel Fitzgibbon for the leadership of the party all at once — he retweeted them all yesterday. Anthony Albanese isn’t much of a retweeter — he must back himself for the top job.

Over on the Liberal side of the aisle, Julie Bishop retweeted the Wallabies multiple times recently — is she supporting captain Stephen Moore for PM? It’s a sure sign. Social Services Minister Scott Morrison has retweeted his colleague Concetta Fierravanti-Wells twice this month, so a conservative revolution must surely be on. Communications Minister Malcolm Turnbull doesn’t get a lot of retweet love from his parliamentary colleagues, so Abbott must be safe there. If we use the Oz’s methods there are leadership alliances forming all over the shop — or perhaps people are just using social media as it was designed to be used. But that’s no front-page exclusive.

Albo’s Labor: a party in search of a story about what we are not — but should be