From print editing to ... SBS? Tongues are wagging over why Ben Naparstek jumped ship. And other media tidbits of the day.

Naparstek’s shock move. July, when full-year results start coming in, is always a time of change at media companies. One of the first big changes to come out so far, as Crikey hit deadline yesterday, is the odd career move of Good Weekend editor Ben Naparstek. His jump — to head of editorial, online and emerging platforms at SBS — is surprising. Naparstek has made his mark in print editing, first at The Monthly, which he started editing in 2009 when he was just 23. While Fairfax group editorial director Sean Aylmer’s farewell referenced Naparstek’s “exceptional editing” of Good Weekend, few were entirely clear on whether Naparstek new position at SBS could really be described as a promotion. Fairfax scribes were quickly speculating on why he would jump from the magazine, or, indeed, whether he was pushed.

In media, the numbers rarely lie, and Standard Media Index figures for Fairfax’s magazines in June weren’t good. Year-on-year, Good Weekend‘s circulation has declined around 7% over the past year — in line with declines at The Sydney Morning Herald and The Age, into which it is inserted. But the ad spending monitored by SMI — generally believed to account for 85%-90% of the market — showed revenues at Fairfax’s magazine titles (Good Weekend is not broken out separately) had declined 40.3% in June 2015 compared to June 2014. That followed further declines in other months this year, and greatly outpaces declines at comparable magazine titles. Bauer Media’s magazines, for example, recorded the next largest declines, and their revenues were only down 23.9%.

Last week, when actress Caitlin Stasey was slamming Good Weekend for canning a feature with her after she declined a nude photoshoot, she tweeted that she’d been told the magazine was being “downsized”, meaning there was no space to run the feature. Crikey asked Naparstek at the time what could be meant by that — we didn’t receive a response to that question. So here’s a theory. Perhaps Fairfax is considering somehow downsizing Good Weekend, and Naparstek didn’t want to stick around for that … — Myriam Robin

“Serial had many ethical grey areas but on the whole it was concerned with open-ended questions — about whether Adnan Syed got a fair trial and the problematic events which led to his incarceration — but The Alibi really, really wants answers. Where Serial producers maintained a worried distance from the devotees and detectives of Reddit, Alibi is asking for them to heap on. They legitimately want Daily Tele readers to solve a murder case.”

Oh boy. Gawker’s two most senior editors have resigned, after the website’s commercial executives pulled down an article outing CFO of Conde Nast David Geithner, who solicited the services of a male prostitute. The prostitute took his story to Gawker after Geithner refused to use his connections to help the prostitute resolve a housing dispute. Gawker has, in keeping with house style, released all its internal emails on the matter …

Video of the day. Crikey subeditorial gem Dan Wood’s comedy web series continues, with another day at The Moribund Times. If you missed yesterday’s episode (or the inspiration behind the punny series, you can catch it here) … 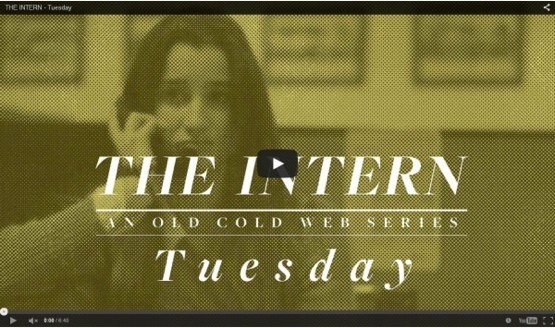 Front page of the day. While it’s shark puns all over today, the West Australian went for a dusty sunset … 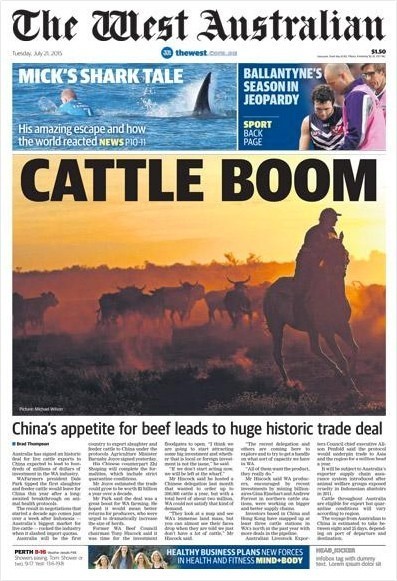 What are the chances of getting reports about cruelty to our livestock out of China?

Re the Good Weekend – gave up reading it ages ago – full of middle class angst and celebrities flogging something or busy trying to restore their images after doing something they shouldn’t have. Won’t be missed.The Sunday mags in the Age are the same.

GW has already been downsized during the past 6-12 months. The Samurai Sudoku has disappeared, and the letters page has become one third of a combined page (currently with Jason Law’s and Danny Katz’s columns).
That is purely impressionistic, and I suspect that there are other features which are no longer published (and reduced display advertising). It is certainly thinner than some months ago if I recall correctly.

For the last decade the SMH has resembled a free suburban throwaway sheet, apart from McGeough & Gittens, full of vapid fluffy kitten stories and the GW wasn’t worth opening once the samurai sudoku was lost.