Earth to Planet Tax: we can see through your sneaky GST ruse

The government is trying to pretend it is the party of lower taxes while encouraging a GST rise. Meanwhile, better tax options are ignored. 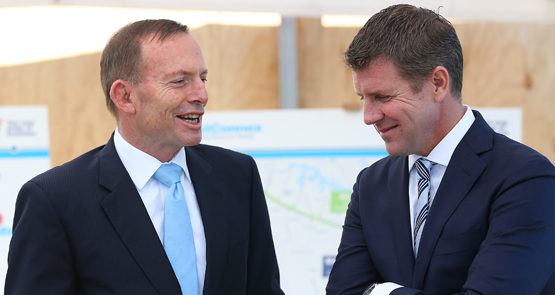 If you’re confused about where Tony Abbott stands on tax, you’re not alone. “They all live on Planet Tax,” Abbott said of the opposition after the budget. “There’s their carbon tax, their mining tax, there’s all the superannuation taxes that they inflicted in government and they want to inflict again on the retirees of Australia.”

Bill Shorten, according to the Prime Minister, was “the taxing expert of our country … every Coalition budget should be a tax-cutting budget … the more of your money that stays in your pockets the better for everyone because no one knows how to spend money wisely better than the people who made it.”

This was part of Abbott’s effort to find an angle with which to attack Labor — label it the party of high taxes for proposing a relatively small fix on superannuation tax concessions and improvements to our much-rorted system of multinational taxation. The government’s own work on super tax concessions was abandoned and a vague proposal for greater taxation rigour on multinationals was conspicuously left without a revenue estimate and labelled an “integrity measure”. It was a fiction, of course — the government’s own budget showed it significantly lifting the tax:GDP ratio in coming years in an effort to slowly return to surplus. But such arcane matters occupy only economists, not your regular voter.

Except, the government wants to lift the GST, despite promising no changes to the GST for the life of the government before the election in 2013. It really wants to lift the GST, but it doesn’t want to argue the case for it — so in the 2014 budget the Coalition engineered a fiscal fight with the states by slashing allocations for health (and, a little, education) by around $80 billion. The states and territories would be left to convince voters of the merits of paying a higher consumption tax.

In Abbott’s view, this doesn’t contradict his argument that it is Labor and not the Coalition that wants higher taxes, because he insists the GST is a state tax. But the GST is levied under, and can only be changed by, Commonwealth legislation, collected by the Commonwealth, reported in the Commonwealth budget and its allocation between the states is conducted by a Commonwealth body. You can’t move to a state with a lower GST rate. Evade the GST and you’ll be pursued by the Australian Tax Office.

Most of all, voters know it’s a Commonwealth tax.

That’s before you get to the issue of lowering the threshold at which GST is levied on imported goods, which the government is also keen to do, but that’s an “integrity measure”, too, apparently. Thus is a “mature, sensible” tax reform debate conducted: I benignly watch the states lift the GST and improve the integrity of the tax system, you live on Planet Tax.

The confusion extends to the 15% GST proposal itself, floated by NSW Premier Mike Baird (yet again putting his federal Liberal colleagues to shame). How much revenue would a 15% GST (and a proper one, without exemptions) actually raise? Baird didn’t offer a figure, and it depends whom you ask. According to the budget papers, this year the GST will yield $57.1 billion, and the lost revenue from exemptions is around $17.5 billion. Let’s round that total to $75 billion — meaning a 5 point rise would likely generate another $37.5 billion — all things being equal. But that’s not what some advocates say: one outfit reckons it would raise an additional $60+ billion a year. Another says $43 billion a year. A 2011 study said just over $20 billion a year — or about $23 billion in today’s dollars. That’s a pretty big difference between estimates.

If we use the $37.5 billion figure, we then need to deduct what will be a substantial compensation package for low-income earners and pensioners. The additional revenue likely to be available will be in the 20 billions, not 60 billions so confidently predicted by some, to ensure the burden didn’t fall disproportionately on low-income earners.

Meantime, the cost of superannuation tax concessions to the budget will reach over $50 billion in foregone revenue by 2018. Even a trim and tuck would deliver $4 billion to $5 billion a year, for far less pain, with the burden primarily falling on the top 5% of income earners. The government could call it a “tax integrity measure” and it could even still pretend the Coalition is the party of lower taxes.

Baird for PM! There’s a guy you can trust (and has a real job behind him).

There seems to be a media consensus that people will accept a higher GST so long as the money is allocated to the health/education budgets.

Of course, such an allocation is meaningless – money and taxation are fungible – it doesn’t matter where it comes from, it only matters how much of it there is.

Taking $80b of “consolidated revenue” funding out of health and education and replacing it with $80b of “GST” funding won’t change anything (other than a relative shifting of the tax burden to the less wealthy).

Thank you BK for this analysis. I trust Premier Baird about as far as Copter Bishop could pilot that helicopter. The conspiracy theorist in me reads it: Baird has just won an election and is a golden haired boy for the Libs (considering their drubbing in Vic and QLD).
Whom better to propose something so contentious, and cause division amongst the Labour states. Could you imagine the outrage if Top Gun Tony had suggested it?
Further, it looks after their mates down the big end of town (how many Porsche’s or Ferrari’s can one buy in a year or so?), as commentators have stated any rise will adversly affect the lower wage earners and welfare recipients more than the LNP voter base (apart from the blue rinsers).
This further deflects Labour, and other calls, for looking into all aspects of tax avoidance such as high end super, negative gearing, overseas tax avoidance and other scheme’s, all of which affect the higher wage earners who seek to capitalise their losses and socialise their losses.

The party of lower taxes but really poor mathematics skills.