Chopper creed: Bishop’s long history of flying on our dime

Bronwyn Bishop has long been using taxpayer funding to fly to Liberal fundraisers. And she has long not cared what you think about it, freelance writer Luke Miller explains. 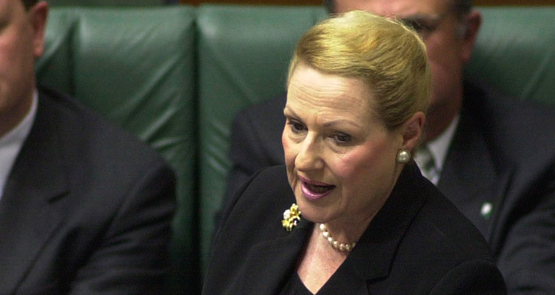 Australians are incensed at Bronwyn Bishop’s use of a taxpayer-funded flight to a Liberal Party fundraiser in Geelong. But the Speaker has never let voter opprobrium interfere with her high-flying lifestyle.

Take this opening sentence from an article in The Canberra Times:

“Bronwyn Bishop defended yesterday making a taxpayer funded flight to Perth for a two day visit during which she has addressed a Liberal Party fund-raising dinner.” 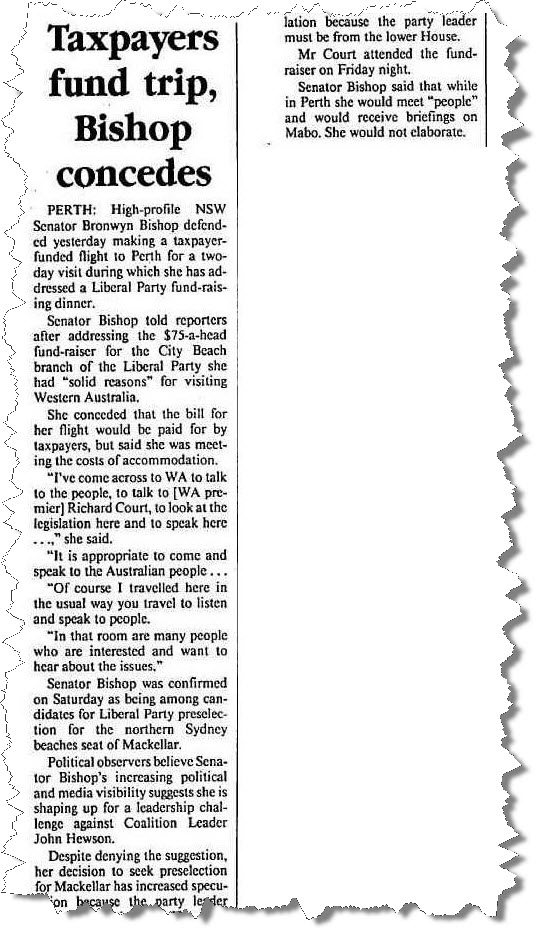 That’s from a November 1993 article critical of the then-NSW senator’s use of taxpayer money for Liberal Party purposes.

And there are more to it than just frequent-flyer points. Whereas today Bishop is under fire for spending $88,000 on a failed attempt to gain a better job — the presidency of the Inter-Parliamentary Union — back in 1993 she was also being criticised for blatantly campaigning for a better job: leader of the Liberal Party. The Canberra Times article noting at the time that “political observers believe Senator Bishop’s increasing political and media visibility suggests she is shaping up for a leadership challenge against the Coalition Leader John Hewson”.

Even Bishop’s defence this week of the Geelong trip counting as legitimate parliamentary business is a reheated hash of her argument in 1993. At a press conference on Saturday, Bishop defended the chopper trip to the fundraiser by saying “it’s my speaking engagement, and I sign it as presiding officer to carry out my job to speaking to people of all sorts. I speak to community groups, I’ll speak to Liberal groups, I’ll even speak to Labor groups.”

When asked in 1993 how a Liberal Party fundraiser could be considered legitimate parliamentary business, Bishop used a similar justification: “It is appropriate to come and speak to the Australian people … in that room are many people who are interested and want to hear about the issues.”

Another article in The Canberra Times, in October 1993, noted that luxury travel at taxpayer expense was part-and-parcel of Bishop’s modus operandi:

“Ironically, the champion of the tax-payers is promoting herself at the expense of those same tax-payers. She has used her entitlement for first-class air travel shamelessly to hurtle around the country. Her journeys were examined seriously by government officials but Bishop kept enough party functions on her itinerary to justify the entitlement. When newspapers lodged freedom of information requests on her travel costs, Bishop revealed her travel bill was more than $93,000.”

And as James Massola points out in Fairfax today, Bishop spent almost $140,000 on charter flights in just four years as a junior minister.

Even though the internet has taken mockery and memes to new levels, comedians in the 1990s were already making fun of Bishop. At the opening of the eighth Melbourne International Comedy Festival in April 1994, a Bronwyn Bishop impersonator (unnamed by the Crimes), “complete with beehive and mobile telephone”, offered this definition of comedy: “To me, comedy is my having a commitment to all Australians. Comedy is about travelling a lot and self-promotion, and I think this is important, it’s all on taxpayers’ money.”

Perhaps comedians should be sharpening their acts for MICF 2016.

Thanks for a good article but please remember that a dime is a US ten cent piece which is not legal tender here … yet.

We don’t have ‘dimes’ in this country.

Though I thought the “Bronwyn bishop doing ordinary things” Facebook page is hilarious.

One of the issues affecting the discussion is that fundraising is seen has some sort of venal or corrupt activity. So if Bishop had visited Geelong and spoken to exactly the same people on exactly the same day for free, then it would not have breached the rules. That is essentially her justification for signing it off as parliamentary business.

Don’t get me wrong. I think it was completely over the top and an inappropriate use of taxpayers’ money. But Shorten referring it to the AFP is equally so – nothing more than a political stunt.

The days when political parties had thousands of members are long gone so funding their activities gets more difficult by the year. The alternative is public funding and there is an awful lot of risk associated with going in that direction.

It all gets submerged in the shallow discussions about buying influence when every single voter is buying influence. People donate to and vote for political parties that they believe will look after their interests.

That’s actually what politics is about.

This woman defies description. I invite everyone to tune in to question time in the house of reps. The current speaker is so absolutely partisan its a bleeding disgrace. I’ve been listing for decades and I’ve never been confronted with such blatant disregard for parliamentary norms, from either liberal or labor. For Abbott to say she’s a good speaker is just another fat lie. Speaking of Abbott, the greasy wing-nut, he gave his game away a few month’s ago when he publicly declared that his “job” was “fighting labor”. Some frigging statesman he is. No hint of delivering quality governance to Australia.

There is often talk of the depths to which the political game has descended. It’s an objective fact that the ultimate cause of this decent lies at the feet of the liberals, and in particular Abbott, who has only one mode of operation which is to cast anything and everything into a simple binary narrative and then go on the attack. He politicises everything. The gutless non-murdoch media (including the ABC), in the interests of so-called objectivity, lay the blame on both houses; this has as much merit as providing equal air-time to “both sides” of the climate “debate”. The outliers here are the independents such as Crikey, and the murdoch press, with the latter simply a tory mouthpiece. I don’t need to go on. FU all.
cheers
B

One Hand – re the remarks in your first paragraph. Didn’t the RC set up by Toady ‘go after’ Julia Gillard (unsuccessfully) for events which occurred in 1990? If so, what was your argument again???
The referral to the AFP by Shorten followed established procedure which the rAbbott set when he was opposition leader. Peter Slipper spent less than 20% of the amount Bishop wanted us to pay for her helicopter, yet he ended up with the full works. Forensic enquiry by the AFP (not handed over to a government department), dragged through the courts and not permitted to reimburse the amount of around $900, as every other LNP offender has been able to do, before and since.
Perhaps you could explain to me what the difference is between Slipper and Bishop in this scenario?
The rules clearly state (apparently) that ANY party fundraising is off limits for taxpayers funds. As it should be!