Gerard Henderson's defence of Bronwyn Bishop's exorbitant travel expenses was desperate. And other media tidbits of the day.

Introducing … The Intern. Readers probably won’t be aware of this, but one of Crikey’s best-kept secrets is subeditor Dan Wood. He writes ripper headlines, like this, this and this, but his role, like that of most subeditors, is hidden behind the scenes.

But Wood is stepping into the spotlight, acting as chief subeditor in a five-part comedic web series he and Lewis Attey co-created, the first of which has been released today. Every day, Damian (Wood) and Ryan (played by comedian Jay Morrissey), subeditors at The Moribund Times, brainstorm the next day’s front-page headline. They’re no good at it, and are every day thoroughly shown up by Liz (Kathleen Mary Lee), a journalism student interning at the paper who can pun simply and cleanly on the day’s news story. They don’t take her suggestions — the punchline of each episode is the awful headline Damian and Ryan end up going with instead.

“I’m sure you’ll be able to tell once you start watching it — considering how ludicrous the front-page stories are — but we actually came up with the puns first and then reverse-engineered each episode to make the stories and other jokes fit the ultimate punchline at the end of every episode,” Wood said.

“Even cheating by reverse-engineering it like that was tricky sometimes,” Attey added. “There were plenty of puns we got excited about and later realised were completely stupid and unworkable. Barackade O’Llama and Lamb Shank Exemption were probably the worst.”

Wood describes the series as a “meta-joke” on the “hermetic boys’-club culture you get in a lot of old print media”. Mind you, he and Attey are working on series two, set in an online political news outlet. They swear it’s not based on Crikey. But we are a little nervous … — Myriam Robin 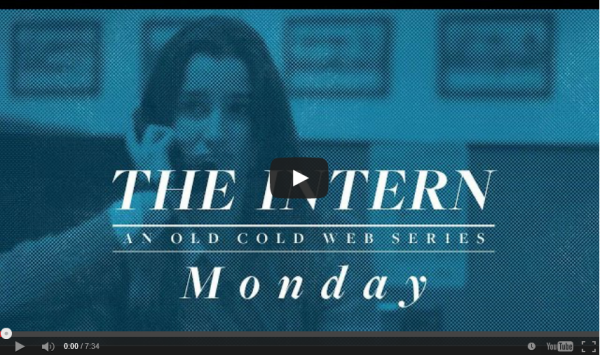 And the gold goes to … There are many contenders for the lamest and most desperate defence of Bronwyn Bishop’s helicopter trip to a Liberal Party fundraiser — not least Bronnie herself — but the gold must go to Gerard Henderson, curled up in seeming pain on Insiders valley-porn white-vinyl couch. “Well you know most politicians don’t want to go to these things,” quoth the gollum. Ah! So we should pay $5000 to shave the journey time by … one minute? Five minutes? … to the fundraiser of a party 60% of us vote against? Sure. There’s your money shot. — Guy Rundle

Wunderkind to SBS. Good Weekend editor Ben Naparstek is in the news for the second time in less than a week — this time because he’s been poached by SBS as head of editorial, online and emerging platforms (that mouthful is the job title). Fairfax hasn’t yet announced his replacement.

Meanwhile former SBS executive Tony Iffland, who left SBS in January after three years as director of television, has been hired by the ABC, as general manager of content sales at ABC Commercial. — Myriam Robin

Murdochs rake it in. The Murdoch clan’s self-enrichment program continues with the complacent board of 21st Century Fox awarding the new group co-chairman and CEO of the company — Lachlan and James Murdoch, respectively — millions of dollars in salary, bonuses and share awards. Both Murdoch sons certainly don’t need any more shares in the company, which the family controls by way of their domination of the undemocratic dual voting structure.

Both Murdoch scions get big pay rises, but not in base salary in the case of James (though Lachie gets more). Departing chief operating officer Chase Carey is the only senior executive to lose money. He will get US$20 million a year for “consulting”, against the US$28 million in total he received for 2013-14. The 2014-15 pay figures for Fox are yet to be released.

Fox revealed in an SEC filing on Saturday morning, our time that James and Lachlan Murdoch will each receive a US$3 million base salary and be eligible for millions more in bonuses. The new pay structure started on July 1. On top of the base salary, James and Lachlan Murdoch will be eligible for annual bonuses of at least $8 million, and no more than US$16 million, according to the filing.

In 2013-1442 James Murdoch’ $18.7 million Fox pay packet consisted of a base salary of US$3 million and stock awards of US$6.6 million. Lachlan Murdoch received $US2.1 million for his role as a Fox director, but that was made up mostly of a change in pension value and deferred compensation. He was also paid by News Corp where he is chairman with his father.

The Murdochs should really be doing the job at Fox and News for minimal pay given their control over the company and the tens of millions of dollars a year in dividends the family trust receives. — Glenn Dyer

Crowdfunding legal bills. On Friday we told you about the disgraceful way News Corp’s UK bosses had abandoned a Sun reporter, Anthony France, who was convicted of bribing officials in the line of his work. News had refused to pay his share of the prosecution’s legal costs and was criticised by the presiding judge, Timothy Pontius, who said in a London court on Thursday that News should pay because it was responsible for the “structure and system” under which France had worked.

A crowdfunding appeal was launched on Friday, a day after the comments from the judge were reported, and it took just a few hours to raise more than the 3000 pounds in legal fees required to meet France’s costs, which were set at 10% of the prosecution’s costs.

The Press Gazette reported at the weekend: “The total was reached within six hours and as of this morning it had exceeded its targeted by more than 1000 pounds. More than 75 people made contributions, including many journalists.”  — Glenn Dyer