Those grumbling about grounded flights at Melbourne Airport this morning should be thanking their lucky stars the ice was detected and addressed. 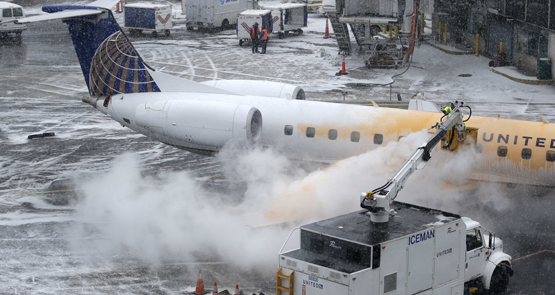 A plane being de-iced at LaGuardia airport in New York

While frost is relatively common over many Australian airports, delays caused by aircraft icing like those being reported from Melbourne Airport this morning are rare.

The good news, however, is that the ice has been detected and addressed. Thousands of people have been killed in airliner crashes due, in part, to the undetected or deliberately ignored formation of ice on flaps and wings while on the ground before takeoff — although not in this country.

Ice on lifting and control surfaces can severely degrade the lifting performance of airliners. But the rarity of the problem at the major Australian airports makes the installation of de-icing gantries or mobile units impossible to justify.

There has been at least one occasion earlier this century when jets at Melbourne airport had to be towed and repositioned on the tarmac to let the rapid rise in air temperatures after dawn remove the “frost bite”.

Similar precautions have been taken in living memory when isolated snow flakes or sleet grains have been observed at Tullamarine. Melbourne’s metropolitan weather reports and anecdotal accounts, including televised events, have recorded transient snow in the Tullamarine and Essendon areas in recent times; however, the last significant fall of settled snow in the CBD and inner suburbs comes up in a quick search as happening in 1951. No record of actual aircraft delays at Essendon appeared, but in those days it was largely a matter of catching the Spirit of Progress passenger train, about the time it was upgraded (or maybe downgraded) from steam to diesel, for the epic trip to Sydney via a change of railway gauge at Albury.

Settled snow on parked airliners has been a very occasional problem at Canberra Airport, including major snow falls in 1964 and 1965, with the latter being much heavier and longer lasting than the falls that covered much of the southern highlands, central ranges and northern tablelands all the way into the Queensland granite belt last Friday.

Private, general and smaller regional airliners have, at times, been snowbound in Orange, Bathurst and Glen Innes, the last being the only airport in Australia ever to record snow on the ground for seven days and nights, although Mt Hotham no doubt would have beaten that had it been built in the much colder ’50s and ’60s.

Drivers going to the Snowy Mountains from Canberra or Sydney often encounter snow on the ground as early as passing Cooma Airport. Snow is obvious, surface or black ice isn’t. As drivers sometimes find out to their sorrow.

One of the counter-intuitive facts about ground-icing on aircraft is that it is rare, if not unheard of, in Siberia, Antarctica and the more inland but high-latitude airports around the world. This is because the colder the air temperature, the drier it is, meaning ice won’t form because of lack of moisture. What snow that falls or is blown around is so dry that it doesn’t bond with metal. Unlike your exposed fingers, if you are unwise enough to take off your gloves.

If it ever gets cold enough for that to happen in this country, what happens to airline schedules will not appear on any top 10 lists of things urgently needing attention.