Once the scourge of public servants, Bronwyn Bishop is now on the receiving end of the scrutiny she once dished out with relish. 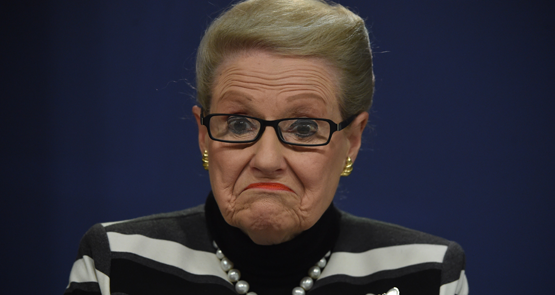 Long before she was Speaker of the House, long before even kero baths, Bronwyn Bishop was a senator — she’d forced moderate Chris Puplick out of a winnable spot on the Liberal ticket — and one determined to use Senate estimates to make a name for herself.

Back in the 1980s and early ’90s, there were four Senate estimates sessions a year, and no limits on sittings. To accommodate the likes of Bishop, public servants were often required to wait around until 2 and 3am in order to be badgered over the minutiae of public spending. Between yawning bureaucrats, Hansard staff and everyone else required to keep the building functioning for these marathon sessions, the cost was probably far greater than any money saved as a consequence of Bishop’s inevitably aggressive interrogations. Some public servants, like the ABC’s David Hill, gave as good as they got. But few had the statutory independence to stand up to the senator from NSW.

She first broke out of the Canberra bubble when she went after tax commissioner Trevor Boucher in 1992, claiming he had bankrupted the ATO. In a joint committee hearing, Labor’s Gary Punch literally screamed at her to shut her down; the two appeared, rather more civilly, on A Current Affair that night (this was another world, in which tabloid current affairs would actually cover political stories). Bishop took particular delight in targeting Boucher because Keating had just made him ambassador to the OECD. Australians took particular delight in the tax man being publicly attacked, and Bishop’s star was in the ascendant, despite the fact that she was quite profoundly disliked within Liberal ranks. No one was too upset when Bob Ellis, of all people, pricked her bubble when she moved to the Reps in 1994.

That’s why John Hewson, Liberal leader back then, reflected on the weekend about Bishop that “it’s amazing how history bites you in the bum”. For a public servant facing Bishop at Estimates in the Keating years, confessing to an “error of judgement” in the spending of public money wouldn’t have cut it. Now, the biter has been bit, and how.

“Error of judgement” of course isn’t Bishop’s own phrase. It was one prepared for her by Tony Abbott’s office. On Thursday, when she agreed to repay the $5000 for her now-famous chopper flight to a fundraiser in Geelong, there was no mention of errors of judgment — the trip was “conducted within the rules”, she said, but she was repaying the sum “to avoid any doubt”. It was the Prime Minister who, on Saturday, said she’d admitted to an “error of judgment”, which she hadn’t at that stage, but Bishop then used the phrase in the first sentence of her Saturday media conference, after an opening joke that fell about as flat as a golf green.

By then Bishop’s rationale had shifted — it was no longer about any doubts; rather, the size of the sum was the problem. But she still insisted it was within the rules for taxpayers to fund her travel to party fundraisers, because she spoke about Parliament while she was there. One imagines, given it was a party fundraiser, the speech rather strongly contrasted one side of Parliament with the other. Bishop even expressed some affront that people attending Liberal fundraisers should be denied the right to hear about our democracy. She also noted that taxpayers would funding the travel of Labor MPs and senators to the Labor national conference this weekend.

Except party conferences are explicitly allowed under the current rules; party fundraisers are not. And Bishop’s position, that merely mentioning Parliament at a party fundraiser suddenly legitimised the event as an official duty, was plainly absurd; any travel anywhere by any politician would now be an “official duty” as long as they mentioned Parliament. Peter Costello, another Liberal who’d observed Bishop’s early years up close, shot that one down in the flames yesterday.

Bishop capped off a memorable presser by lashing out at Joe Hockey, resurrecting his “poor people don’t drive cars” line. Hockey then returned fire yesterday. Hockey complained that the whole business was distracting from real issues, prompting the question of why he was giving an interview at all.

Between cabinet leaks, Malcolm Turnbull’s “look at me” act, Scott Morrison’s undermining of Joe Hockey, Christopher Pyne — who was outraged Labor criticised Bishop on the anniversary of MH17 — saying he’d be watching what he said in cabinet, Barnaby Joyce comprehensively breaching cabinet conventions, and now the Treasurer and the Speaker openly attacking one another, this is a wretchedly divided government. Abbott remains steadfast in his support of Bishop, though adjusting his rhetoric considerably this morning. Having referred to the matter as “village gossip” last week, today he spoke about the justified criticism of her and said she was now “on probation”, but urged that people “keep a sense of proportion”.

For all Labor’s urging that she be sacked, they’ll be hoping Abbott keeps backing her. She’s a gift that will keep on giving.

How can poor precious Toady (our Pissant Moralist) argue against “sinking the Slipper” now?
[Slipper was a Liberal member when he committed his “offence”, having not yet risen to Speaker status? He didn’t get the chance to “just pay it back”.
Abbott was part of the government that sank the slipper into Halverson (their own Speaker) for being “too impartial”?]
Talk about a “glass jaw”?

If Bishop is a ‘gift that keeps on giving” one hopes that the Labour party doesn’t waste time and public outrage to well and truly shoot her down at every opportunity.
Frankly, up to this point, so many LNP targets have flown over and little Labour ammunition expended.

I have read the transcript of the the House of Representatives Standing Committee on Family and Community Affairs, chaired by Bronwyn Bishop. Her treatment of Dr Alex Wodak, distinguished drug law reform advocate was vile.

She is vile. But then so is the government she represents

A classless grub who really thinks she was born to rule.