The Daily Tele gets its Serial on by using an investigative journalism podcast to get to the bottom of two unsolved murder cases.

When American National Public Radio podcast Serial swept the world last year, most figured you could never do something similar here.

Our defamation laws are too restrictive, legal experts told Crikey. But the Sunday Telegraph is out to prove them wrong. 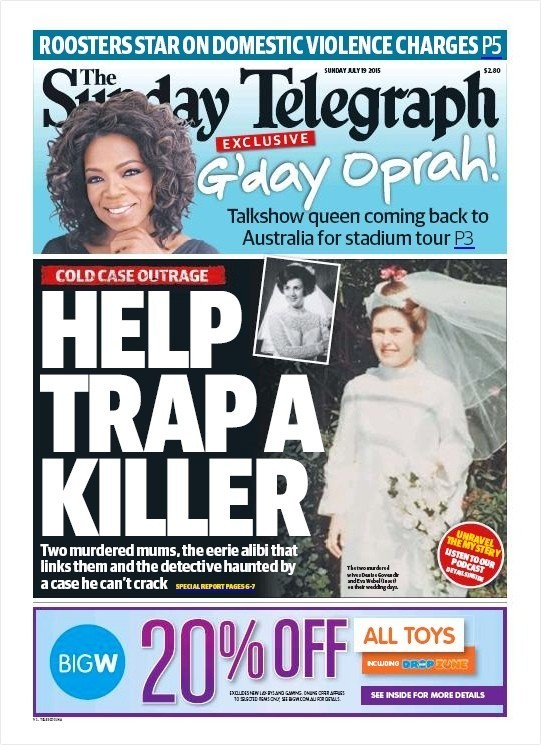 Yesterday the Sydney tabloid launched The Alibi — a free podcast available through iTunes and on the Daily Tele website. It will spend a minimum of three episodes examining the murders of Denise Govendir and Eva Webel, two Sydney women murdered 17 years ago in somewhat similar circumstances. Their killings are cold cases — no one was ever charged in the Govendir case, and no one was found guilty in the Webel case. A a coronial inquest into Govendir’s murder found there was “insufficient evidence to identify those responsible … beyond reasonable doubt”.

“Here at the Sunday Telegraph, we can’t believe how two innocent women can be murdered in such appalling circumstances and no one is in jail for the crimes,” journalist and Alibi host Yoni Bashan says towards the start of the first episode. “We want you to help us catch the killers.”

Sunday Telegraph deputy editor Claire Harvey is the producer on the podcast. She says she’s been talking about doing something similar with Bashan since Serial came out last year.

“Like everyone in the world, we love Serial,” she told Crikey. “As soon as I heard it, I said to Yoni, ‘let’s find a cold case we can do’.”

Bashan had been aware of the Govendir and Webel murders, having looked into them some years back. Govendir’s family and the police were happy to co-operate in the hopes of unearthing a lead.

Episode one focuses largely on Govendir’s murder. It opens on the sound of Bashan knocking on the door of Govendir’s husband, who declines a request for an interview and shuts the door. Aaron Govendir was a suspect in the police investigation, but he was never charged. He says an unknown assailant entered his house and knocked him out, and when he came to he was tired up, and Denise had been brutally murdered. The first episode examines his account and asks investigating police whether they had suspicions about his guilt. His wife’s family and friends also describe him as a controlling “Jekyll and Hyde” personality, and they note he and his wife were in the process of a divorce. But the episode also examines the physical evidence, which backs up Aaron’s account.

“Police were quite open about the fact that they’d looked at Aaron Govendir as a suspect,” Harvey said. “The coroner also said that. But there is not enough evidence according to police to bring him to trial.

“So we are not suggesting that he killed his wife. And we’ve been very careful to suggest the opposite. There is something else about this case that is unexplained. We don’t want it to look like we’re just trying to stitch up one person. We’re not — we don’t believe he’s guilty.”

The “something else” Harvey is referring to is the identity of the person who stole the couple’s white Ford Laser on the evening of the murder. It was found 11 days later a little more than a kilometre from the Govendirs’ Dover Heights home, carrying traces of Denise Govendir’s blood. The Telegraph‘s reporters hope that finding the car thief will provide a lead to the killer. 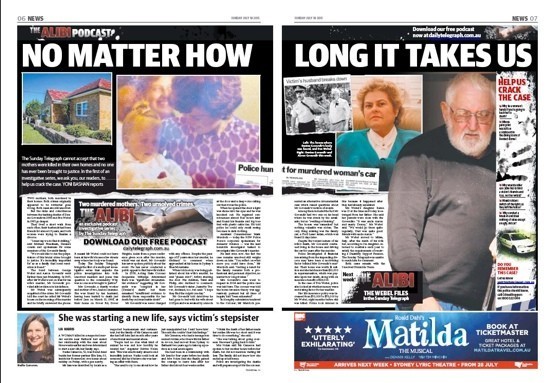 The paper has run the series through extensive legal vetting. But associate law professor at Sydney University David Rolph says the fact that no one has been arrested actually makes it easier for the Telegraph to broadcast what it has.

“There’s no issue of sub judice contempt,” he told Crikey. “That only applies once someone is arrested and charged. So they’re on pretty safe ground on that.”

The media’s role in uncovering crime has been enshrined in High Court rulings. For example, the 2006 ABC v O’Neill case, which centred around a 2005 ABC broadcast of a documentary accusing someone already in prison of being involved in further murders, upheld the media’s right to investigate issues of criminality. Arrest and charge, for the purposes of sub judice, serves as a “bright red line”, Rolph says. “Before that, there’s greater scope to investigate and publish stories on criminal matters.” Provided the Tele doesn’t defame anyone and sticks pretty closely to the facts of the police investigation, or can back up with evidence anything new it uncovers, it’s free to investigate.

It’s worth noting The Alibi repeatedly encourages listeners who might know something to contact police, but, Harvey says, it would be nice if listeners got in touch with her and Bashan as well.

“Without sounding too corny about it, I am genuinely outraged. Two women were murdered, and no one’s in jail. Unacceptable, and it is quite baffling. We’re hoping our readers and listeners can either unearth information that can help, or encourage NSW Police to take another look at this.”

For their part, NSW Police have been unusually co-operative with the Telegraph‘s investigation. The first episode features on-the-record interviews with the officer in charge of investigating the murders, Mark Murdoch, now NSW Police Force Assistant Commissioner and a key media spokesman on domestic violence issues. He is, Harvey says, an unusually media-savvy cop. Still, she acknowledges, the police are both happy the cold case is getting attention and nervous about what will happen.

“Police in any circumstance look at media with a very cautious eye,” Harvey said. “They know our power to help, which is why they’ll wheel out the relatives of victims of crime from time to time. But they also can’t control what we do. They have to trust us to get it right and not stuff everything up. And it’s certainly not in their interests for us to go around defaming people — that would jeopardise any future court action.”

Quite aside from the legal risks, a podcast is a commercial test for the Tele. “Our readers aren’t expecting content to be on an audio platform,” Harvey said. While the Sunday Tele splashed with the podcast, actually listening to it requires listeners to go online to iTunes or the website — an extra hurdle. To minimise risks (“it’s hard to get a print media company to invest in this”), the whole thing has been done on the cheap. Harvey estimates it only took $500 in equipment, although she estimates she spent three full weeks on the project, and Bashan spent at least five. He began interviews three months ago, though scripting didn’t start until three weeks ago. Three episodes are so far scripted and ready to go, but the team is sticking to the Serial playbook by being open to doing more episodes as the investigation develops. Already, the Telegraph has received many letters and online comments about the podcast, and many people have come forward offering to help in any way they can. But it’s early days yet.

“We don’t want to sound like we know everything. We don’t,” Harvey said. Listeners puzzled by Sarah Koenig’s ambivalent ending in Serial know exactly how she feels.