Who needs photojournalists? <em>Oz</em> lets PM supply his own picture

Tony Abbott was looking very prime ministerial with all them soldiers, don't you think?

If politicians are supplying the stories (via selective, uncritical drops) and the pictures (via in-house photographers), is there any reason to have journalists at all? That’s the question some are asking after The Australian published a photograph of the Prime Minister taken by the PM’s own staff photographer on its front page this week.

The photograph was taken by former Daily Tele photographer Brad Hunter, who became the PM’s personal photographer, reportedly the first to hold the position full time, in April.

Supplied images — those not taken by in-house photographic talent but provided to media, often by the person being photographed — have long been a fixture of some types of news coverage, particularly where giving access to photographers would be impractical. TV stations, for example, have for years relied on police-supplied video of arrests and raids. But The Australian‘s decision to splash a photo supplied by the Prime Minister’s Office on its front page was very unusual for a hard news publication covering a political story. 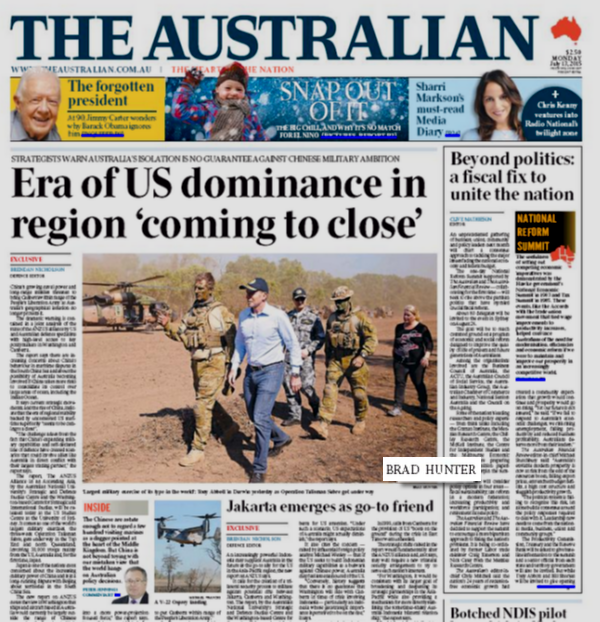 The image was of Abbott walking with uniformed soldiers in Darwin over the weekend, as military exercises there got under way. It was first shared on Abbott’s social media page the day before (Crikey used another one of the images uploaded by Abbott’s social media team for our Department of Australia on Monday).

The use of the image on the front page of the Oz, credited to a name many readers would assume was a News Corp photographer, has shocked some within the press gallery. “Pretty amazing to run PMO propaganda on the front page,” one Fairfax scribe commented to Crikey yesterday.

Australian editor Clive Mathieson told Crikey it was always the paper’s preference to run photos taken by its own photographers, or by other News Corp snappers or wire agencies. But, he added, “the reality is that we are not able to get a photographer to every event, particularly those put on at short notice (a common practice of politicians), on weekends and in very remote areas.”

“On the occasions when we use pictures supplied by the Prime Minister’s Office, they should be identified as such.

“We will continue to strongly resist attempts by politicians to limit access to photographers and reporters to media events.”

If images such as Hunter’s become pervasive in how the media covers politics, it’s easy to see the problems. Unscripted, honest portraits of parliamentary life captured by independent photographers will become rare, with the public getting coverage that is far more contrived to present politicians in a good light.

Writing in April, Fairfax senior politics writer Stephanie Peatling noted that in the past, “media photographers were relied upon to take the pictures, which would  then be selected by editors and placed in newspapers according to what a range of people judged to be the best image to illustrate a story. Now, politicians can readily bypass that filter.”

She detailed how Andrew Meares, Fairfax Media’s chief photographer, was denied access to New South Wales Premier Mike Baird on election night, in favour of Baird’s own digital media specialist, Tony Story. On social media that night, Baird’s Twitter account shared a beautifully shot black-and-white photograph of the Premier and his wife embracing, with a message to the voters of New South Wales: “Thank you NSW. I love this State. We will work for you, every day, for the next 4 years.” As Peatling noted, the photograph seemed deliberately Obama-esque.

The photo was widely shared. But what didn’t the public see on election night? Or on Abbott’s trip to Darwin?

I suppose we should be grateful that it didn’t show the Abbottrocity stari9ng manfully into the future, determination written upon his simian brow, prognathous jaw jutting forward,licking his lizard eyes.

If one is allowed to Post a serious response, surely there are far more relevant issues facing the Nation than who takes photos used by the media?

Apparently on this thread, Myriam, it’s the serious questions which upset the Crikey Censor.

Little by little, drip by drip. Control of what appears in the media is the agenda.