George Brandis buying French cheese ... Kelvin Thomson's seat up for grabs? ... is Rusty selling out of his beloved Bunnies? ...

Reading between the lines. Here’s one Labor appointee not even Tony Abbott has the courage to sack. Arts Minister George Brandis — the most accident-prone of the government’s senior ministers (excluding Speaker Bronwyn Bishop) — yesterday announced the reappointment of Ryan Stokes to a second three-year term as chair of the National Library Council. Stokes is the newly appointed CEO of Seven Group Holdings, dad Kerry Stokes’ key listed company, which in turn controls Seven West Media with its Seven TV network, West Newspapers print operations in Perth and Pacific Magazines. Stokes was appointed to his first term back in 2012 by the then-Labor government of Julia Gillard. He then replaced Jim Spigelman, who was appointed chairman of the ABC — that is one ALP appointee Tony Abbott is itching to sack, but can’t. Brandis said yesterday Stokes had helped facilitate the loan of several rare cartographic items from for the library’s Mapping Our World exhibition. He also helped secure the Rothschild Prayer Book from his father, for its first public display in Australia. “His corporate experience and expertise has also been of significant value, particularly in growing philanthropic and private sector support,” Brandis said.

Yes, it never pays to make an enemy of a media proprietor in this country. Stokes though has the ear of the Prime Minister. Last month his opposition to the government’s media laws (being promoted by Communications Minister Malcolm Turnbull) were reportedly expressed directly to the PM, who then withdrew his support for them, effectively scuttling them. News Corp Australia, the Murdoch clan’s Australian company, was also opposed to the changes because they did not change the sports anti-siphoning rules. Stokes is strongly opposed to any watering down of those rules.

Mon dieu! Speaking of the Minister for Arts (that he likes), Brandis was spotted this morning not in Camembert-a but on the Sunshine Coast hinterland, whey-ing in on the local produce. Seems apt for our Francophile (remember Islamic State is an “existential” threat) Arts Minister, who does tend to milk things a bit too much. And what was he spending his hard-earned cheddar on?

“Senator George Brandis just bought a bag of various french cheeses from the Colin James Fromagerie in Maleny. Took off his glasses in an attempt to disguise. Did not visit the Cooperative Store and green centre next door. No helicopters seen.”

Who wants Kelvin Thomson’s seat? We hear from a tipster that Labor members in Melbourne’s inner north are again circling the safe seat of Wills, held by Kelvin Thomson. A tipster told us that Thomson, who suffered a serious heart attack earlier this year, was considering retirement — a claim that was kiboshed by his office this morning. It’s not the first time that Labor types have been eyeing off the seat — we were told in January that Mamamia editor-in-chief and former Kevin Rudd staffer Jamila Rizvi’s name had been connected to the seat as well. At the time Rivzi said that politics wasn’t on her radar. Now a tipster has mentioned both Thomson’s staffer Anthony Cianflone and Moreland mayor Meghan Hopper as possibilities for the seat. Both laughed off the suggestion when contacted by Crikey this morning. Thomson has already won preselection for the next election unopposed, and Hopper said “it would be a very brave person who tried to challenge Kelvin Thomson” and that she was sure he’d be the member for Wills for a few more years. She also said “when that time comes I’dd be very happy to be approached” about preselection. While Thomson continues to say that he’s not going anywhere, it’s interesting that there are voices that like to encourage the rumour he is — who else has their eye on Wills?

New face at Border Force. The militarisation of the Immigration Department continues apace under new secretary and former Customs head “Iron” Mike Pezzullo. The department’s new head of communications — a band 1 senior executive services position — is Mark Jeffries, who is coming from Defence. Jeffries was acting head of ministerial and corporate support at Russell. Deputy secretary Rachel Noble was from the same area of Defence, while another deputy secretary, Maria Fernandez, worked in Defence in intelligence, including as deputy head of the cowboys of the Australian Signals Directorate. This is another reason why Crikey recently argued that the new Australian Border Force (run by a former copper, Roman Quaedvlieg) should be appropriately regarded as another national security agency, not just a run-of-the-mill government agency.

Farewelling Lawrence. While friends and family, and a good number of journalists and colleagues, will crowd Neil Lawrence’s funeral in coming days, there are few political junkies who haven’t been struck, one way or another, by the advertising guru’s campaigns. Australia will have a chance to say goodbye when KaChing!, a documentary Lawrence was executive producing before his death, screens in Sydney on Wednesday as part of a planned launch, and later airs to the nation on the ABC. When Crikey asked yesterday, the hour-long doco wasn’t yet locked into the ABC’s schedules, but no doubt an announcement will be made in the coming days. KaChing! looks at the impact of the poker machine industry on Australian society.

Latham legacy at AFR. Sex Discrimination Commissioner Elizabeth Broderick visited the Fairfax offices in Sydney yesterday to talk about gender issues, and was pressed by some staff for her opinion on Mark Latham’s columns in the Australian Financial Review, which have regularly taken aim at feminism and feminists. Broderick’s insight on the consequences for the paper was revealing: 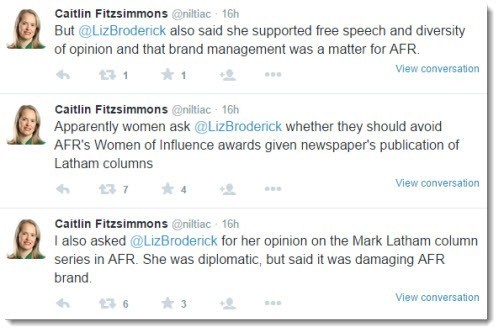 No Rabbitohs for Rusty? A caller to 3AW this morning said that actor Russell Crowe will be selling his Rabbitohs share to James Packer, who already owns a 37.5% stake in the NRL premiers. Together Crowe and Packer own 75% of the club, so if he were to sell his share it would leave Packer as the sole major shareholder. The other 25% is held by members. Last year he told CBS that buying the club ruined his marriage, but why would Rusty be selling now?

ALP dissent. It’s a week until Labor members descend on Melbourne for the ALP national conference, and from what we hear from tipsters, the heat is well and truly on Bill Shorten:

“The ALP branches are turning on Bill Shorten’s leadership. At one branch this week, the home branch of a senior Shadow Minister who was not present, every member regardless of any factional alignment criticised Shorten’s lack of vision, inadequate communication skills and the baggage he carries from his union days and wanted him to be replaced. Tanya Plibersek, Anthony Albanese and the local member were viewed as suitable replacements.”

It’s tax season, who knew? We’ve been hearing from multiple sources that the Australian Tax Office’s website and the MyTax platform, which is supposed to be taking over from eTax, have been full of glitches over the last few weeks with a rush of traffic while people complete their tax returns. We asked the ATO what was going on, and if there was a reason for the site’s issues, and were told by a spokesperson “we’ve worked around the clock to address a few early teething issues with our expanded online systems, but they are performing strongly and we have received 10 per cent more online lodgements than at the same time last year”.

Because we’re happy. The Household Income and Labour Dynamics in Australia survey has been making headlines this week, revealing to us that some gender stereotypes are still powerful, and that those living in smaller towns are happier than city slickers. Associate Professor Roger Wilkins, principal research fellow of the project, took part in a Reddit AMA yesterday to answer questions about the survey — and we found this recommendation interesting:

Re the new Border Force – I was surprised to see the new head honchos parading in military-type uniforms. I would have expected a softer, constabulary, image would be more acceptable to those purportedly being protected.
Now I have started, any thoughts on the new Victorian police blackshirts? An unfortunate reminder of certain fascist regimes.

The whole border force setup is bizzare. Those uniforms look like something out of a Pink Panther movie.
Re the Vic Police uniforms, I forget the reasoning for the change, but they are similar to some of the police forces in the USA? (that doesn’t make it a good thing though).

Whoever chose those SS/Wehrmacht uniforms must have deep seated longings.
I wouldn’t be surprised if Pezzullo had a strong influence – the man is the very model of a martinet.
He entered Customs (as was) sideways (never opened a bag nor searched a hold) and rose without trace, his entire shtick the epitome of MBAbble best exemplified at one of the re4curring ‘crooked Customs officer’ scandals at the end of 2012 when he set up a “root & branch review” designed to fail.
Which it promptly did so, to be fair, I suppose that was a success of his.
Probably the only one.

The ALP Conference will, like this Crikey article, be more about Theatre than Policy.
There’ll be no shortage of comments similar to sang-froid’s reference to dress attire of opponents, and SusieQ’s “Pink Panther” memories.
The main difference is that the ALP won’t need the Crikey Censor because those who run theses charades ensure there’s no contrarian voice to question the Empress’s lack of much ideologically relevant clothing.