Alexis Tsipras is not a wild-eyed Marxist revolutionary. Nor is he Tony Blair. But the real story on Greece is only just beginning. 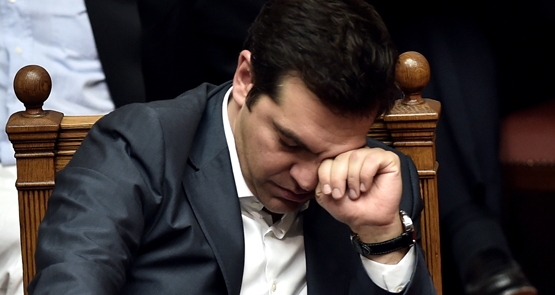 Nothing happens for decades and then decades happen in weeks. Overused quote, but it applies this week to Greece and the European Union. In the years to come the memoirs will come out and we will get a better picture of exactly what happened behind closed doors in Brussels, Berlin and Athens.

For now, we have to go on what we know publicly: that the EU presented Tsipras and Syriza with a “final” deal a fortnight ago, they took it to a referendum, fielded a huge “no” vote for that deal, and went back to the negotiating table.

They got a revised “offer” that was better in some ways — it guaranteed 80 billion euros of debt relief, a huge amount to get at this late stage from a recalcitrant Europe, and won with the help of the French and even German Chancellor Angela Merkel against the financial “centre”, who wanted to cut Greece off without a cent.

But in others it was worse. The most serious blow was a return to forced privatisation, mitigated only by putting 50 billion euros of assets in a trust under nominal Greek control. VAT and business tax were hiked up, but the latter more so.

A whole series of petty measures round Sunday trading, pharmacy ownership, etc, were laid down — business “efficiency” measures that the EU had demanded Greece reform from its side, and that had not been done so for political reasons. The pettiness of the demands was a sort of showdown — you want debt relief? Here’s what we want done.

The measures are of course ritual and nonsensical as stimulus, even where they may be coming from the market extension demands of Big Pharma and other groups. What Greece needs is to be able to run deficits for a few years while restructuring its economy at the same time. A macro extension of demand is the only thing that would get it out of the depression trap it is now in.

Why did Tsipras, with the “oxi” result in his hand, agree to these measures? The most cynical view is that he wanted a “yes” vote, to quit and let a New Democracy minority government pass the measures through. I can’t see how that would work, since, if Syriza opposed the deal en masse, no majority would be there. And a “yes” vote enacted by Syriza would have split the party in a more serious fashion than it has now been split.

Tsipras’ legal argument is presumably that the referendum was not a vote on Grexit, but on the particular deal. Yet he has been stymied by the determination of the EU centre to insist on a deal whose most visible features provoked a storm of opposition. Quite possibly, he welcomed the EU imposing some structural changes that he could not, since there remains a degree of clientelism and featherbedding in the Greek economy. But the privatisation program — and the demand that Syriza essentially reverse all the laws it has made since coming to power — has sunk Tsipras politically, dividing Syriza against him, and forcing him dangerously close to relying on the right to get the new package through Parliament.

No sooner had that occurred than the IMF came out with a report that was essentially supporting Greece — arguing that under current conditions its debt would extend to 200% of GDP, and that it would never really begin to break down the debt. A country with a need for fiscal flexibility would need to run surpluses for 30 years under those conditions.

The IMF’s curiously timed response, too late to be of much help, early enough to absolve itself of blame for what comes next, essentially made it clear that the EU financial centre was imposing a simplistic formula so rigid and robotic that even the IMF — the great one-size-fits-all organisation — was baulking at it.

Now, with the signing of the deal, the ECB has turned the tap on, allowing for 7 billion euros in liquidity, and a re-opening of the banks next week. The degree of blackmail and menaces is brazen beyond their caring. Anyone who thinks they know what was going on has a secret knowledge I and others certainly don’t.

In the interim, everyone has an opinion, and all of them come damningly down on Syriza, from both left and right, much of it equally silly, though in different ways. The suggestion, most recently revived in the Oz, that Syriza was some sort of wild-eyed insurgency, with its former finance minister, Yanis Varoufakis, a Marxist revolutionary, did not square well with the reality of a party trying to keep a peripheral economy within a neoliberal currency arrangement, in order to maintain its access to capital. From the other side, John Pilger’s damning of Syriza and Varoufakis as kin to Tony Blair, is … unilluminating, to say the least. Inconveniently for some critics from the further left, much of Syriza’s left platform has voted for the deal.

When there’s this level of divergence, you know that the situation itself isn’t being addressed, but a series of fantasies are being projected upon it. Tsipras and Syriza, with 36% of the popular vote, enacted what the campaigned to do — try to get the best possible deal, while staying within the euro. When faced with a crisis point they went to a referendum.

Perhaps the referendum should have put the question of Grexit as the next step in the absence of a new, better offer. The absence of such opens Tsipras and the Syriza centre to the charge that they are determined to stay in the euro at all costs. But polling shows that the clear majority of “no” voters assumed that their vote would mean renegotiation, not Grexit.

Given that the next offer was in some ways worse, one could argue that the next step would have been a second referendum, with Grexit specified. But that would have been farcical, and, worse, would probably have delivered an evenly split result hovering round 50-50, and no level of determination at all.

Should Tsipras simply have walked out of Brussels when the new deal was presented and got on a flight back to Athens, to think it through more clearly? Is it something as simple as the atmosphere, the brow-beating, the ganging up in a time of crisis that wore him down — aware that the country’s import-export chain of commerce (refining crude oil chiefly) was about to collapse entirely? Or was this Tsipras’ reverse Brest-Litovsk, giving away everything to keep a foothold? Or has he moved so far to the centre-right within his movement that he sees his role as selling this deal back to his own people?

I don’t know. We’ll find out in years, not weeks. But if you want a sure idea of how things went down and what Tsipras should have done, read EVERY OTHER COMMENTATOR on the matter, because they could have a solution — 15 of them, all contradictory, and all clearly better than whatever Alexis Tsipras came up with. Weeks in decades, decades in weeks.