To effectively prosecute reform, politicians need to be trusted by the electorate. Bronwyn Bishop and Bill Shorten haven't helped that cause. 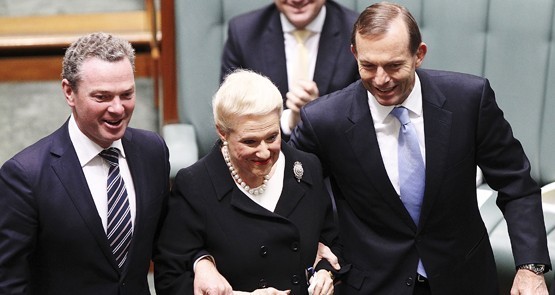 Amid much debate about the loss of political capacity to prosecute economic reform, the issue of trust gets overlooked. It’s a kind of triple threat. It’s harder these days for politicians to communicate effectively than it used to be, given the fragmentation of the media environment, and the current generation of politicians, Malcolm Turnbull honourably excepted, struggle with communicating anything requiring nuance or complexity. Tony Abbott is the exemplar of this problem, being incapable of delivering any message not framed around stopping something (or, to be fair, a grocery code of conduct).

But it makes those challenges even greater when voters don’t trust politicians.

A few weeks back Essential Research asked voters which professions they trusted most and least. You won’t be astonished to learn politicians came in last. But they came in really last: just 1% of voters had a lot of trust in politicians; only 10% had some trust. Forty-nine per cent said they had no trust at all in politicians. That’s even lower than journalists — 27% of voters had a lot or some trust in the media. Used-car salesmen weren’t on the list, but real estate agents were, and even they fared better, on 12%, and only 44% said they had no trust at all.

The party leaders only score a little better than politicians generally: 31% of people say Tony Abbott is “trustworthy” and 28% say he is “more honest than most politicians”; Bill Shorten scores 33% and 29%, respectively. So any politician spruiking reform is coming from the difficult position that most voters don’t trust them or believe them before they even open their mouths.

Enter Bill Shorten last week, with his eight-years-late donation declaration — which turned out to be $65,000, not $40,000, we learnt. And then, this week, Bronwyn Bishop emerged with an expenses claim so egregious that even a carbon-price scare campaign from News Corp couldn’t keep it from dominating the media and forcing Bishop into a bizarre backdown in which she insisted her claim was legitimate, but said she’d pay it back anyway.

But then, with that compelling image of Bronwyn and her chopper, mid-golf course, the scandal had the kind of WTFness that took it well beyond the political bubble.

I’ve long argued politicians aren’t remunerated well enough and that, at the federal level, nearly everyone in Parliament is there because they genuinely want to serve the national interest. But those arguments become harder to sustain every time further evidence emerges of politicians of all stripes rorting — or conveniently erring when they claim — their entitlements, particularly around travel (especially the strange coincidence of politicians regularly needing to travel to where major sporting fixtures are being played, which is a mystery for the ages).

The problem is made worse by the regulatory nature of the entitlements system, which is a combination of self-regulation and complaints-based regulation. You might be tripped up by the Department of Finance if you claim outside the entitlements — or you might not. Attending a political fundraiser is plainly outside travel entitlements, which only allow for MPs to travel to “meetings, other than in Canberra, of a parliamentary political party, or of its executive, or of its committees, attendance at the national and state conferences of a political party, to which he or she belongs”. But it took media scrutiny for Bishop to agree to pay back the chopper cost — i.e. someone had to complain before there was any regulation, and then it was only because of political pressure.

Like travel entitlements regulation, political-donation disclosure laws border on the voluntary, with parties suddenly disclosing controversial donations years later and taking advantage of the myriad of loopholes and excuses not to declare things — especially the Coalition parties, who play strictly by the book and look for any excuse not to report donations. Neither Labor, nor the AWU, nor Unibuilt reported the donations to Shorten’s campaign back in 2007, but no one faces any serious repercussions as a consequence of the non-disclosure beyond the cost to Shorten politically.

The impression — which I would still argue is misleading — that politicians are a pack of rorters is thus reinforced by the essentially self-regulatory nature of laws around funding and spending. And it’s exacerbated by how, despite scandal after scandal being exposed, politicians are content to merely tweak the system to provide the appearance of rigour rather than to establish a framework that would rely less on the media — with its ever-diminishing resources — catching politicians out.

This sort of thing tends to be dismissed as a distraction by the political class, tabloid ephemera that doesn’t relate to the big-picture issues of economic reform. But it undermines the possibility of already-inept communicators convincing the electorate of the merits of any policy that doesn’t produce winners all round. How can a government ask the community to accept lower government spending or higher taxes if the Liberals’ own Speaker of the House is jumping in choppers like you or I would call a cab?

I am curious about the evidence which supports your belief that most politicians are there for the national interest.

The publicly available evidence is much to the contrary for all but a few. Since the Hawke government there has been an increasing trend of placing self interest, party interests, corporate interests (closely aligned to self interest), clan interests, religious group interests, factional interests above any consideration of Australia or Australian’s best interests.

It seems that the more we pay them the more they enter parliament just for the pay and conditions.

There are obvious exceptions, but the mainstream parties either actively promote self interest as a legitimate and desirable motivation (Liberals and Nationals), or refuse to police their members who act corruptly, illegally, or dishonestly. There are parties who openly declare a religious interest and motivation as higher than a national interest, pro corporatists who are antidemocratic at their shrivelled cores, and plenty who pursue ideological outcomes e.g. laissez faire economics with no regard to their appropriateness as to time place or circumstances.

Perhaps if we pay them less and tighten their conditions of employment, and make them genuinely accountable, the chancers will decide it’s not worth the candle, and we can elect people who actually do give a damn about us and our country.

Rightly or wrongly I have always assumed that they all rorted the system. My mind goes back to Don Randall & even the PM attending cycling events. Bronnie got complacent. Sure, she needs to go, if only for the broader purpose if making way for someone with ideas.

I reckon that the pm especially is there purely and simply for the power.

Legend has it politicians genuinely believe the world will be poorer if the pollie concerned loses his seat. This was the sort of mantra I learned.

@Vernise
While your comment is a bit extreme, I agree with your sentiment. One has to hate the bastards.