A double dissolution election would probably bring in more micro-party senators, which would be a headache for the government. But it might be worth it for the damage it would do to the Greens. 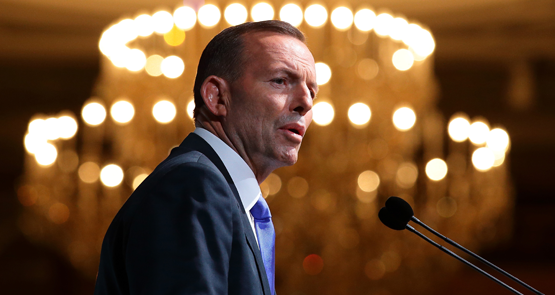 The odds on an early election narrowed this week with news that the government is preparing to set up a double dissolution trigger on the strategically opportune terrain of union power.

When Parliament resumes next month the government will proceed with a bill to extend to trade union officials the financial behaviour and disclosure standards that apply to company directors, which Labor, the Greens and the three current and former Palmer United Party Senators voted down in March.

It is widely supposed that the government already has a trigger available to it in the shape of legislation to abolish the Clean Energy Finance Corporation, but it’s far from clear that this is actually the case, given that the bill was rejected before the senators elected in 2013 took their seats in the middle of last year.

Since the purpose of the double dissolution mechanism is to break deadlocks between the two houses, it would certainly breach the spirit of the constitution if senators who never voted on the bill were to be held accountable for its rejection. Whether it would also breach its letter would be a matter for the Governor-General — and the granting of double dissolutions is one area where he is not obliged to ask how high when the Prime Minister tells him to jump.

Predictably enough, Prime Minister Tony Abbott has played down suggestions that a move to establish a trigger without such ambiguities might be the harbinger of an early election — and it’s certainly true that he may have other strategic considerations in mind, such as maintaining pressure on Opposition Leader Bill Shorten and ensuring discipline among his own fractious troops.

But options are always handy to have, and the indications offered by this week’s polling will only have increased the temptation to make use of it.
If so, the calculation facing Abbott in the short term is whether a re-election opportunity is worth the pain of the Senate configuration that would emerge from a double dissolution held under the existing electoral system.

A commonly held view is that the lower quota for election when all Senate seats are in play would result in an influx of micro-party eccentrics who would shortly have a re-elected Coalition government pining for the good old days of Jacqui Lambie.

It’s certainly clear enough that the micro-party ranks would swell from the current eight seats out of 76 to perhaps as many as a dozen, including a seat or two gained at the expense of the Coalition. However, the mathematics of a double dissolution provide two reasons for thinking that Abbott might not regard that as any worse than what he faces currently.

The first of these reasons is the Greens, who ordinarily face the objective of amassing 14.3% of the vote in any given state, either directly or through preferences. Where they can manage that at two elections in a row, as they have been able to do in Victoria, Western Australia, South Australia and Tasmania, they can boast two Senators from the state in question.

However, a double dissolution subtly raises the bar, since the formula for a quota is one divided by the number of seats up for election plus one — meaning one-13th at a double dissolution, compared with one-seventh at a normal half-Senate election.

The resulting 7.7% quota makes the first seat a foregone conclusion for the Greens, but getting to a second requires that they make it all the way to 15.4%.

According to simulations conducted by a blogger travelling under the pseudonym of Organised Contrarian, a double dissolution that produced the same voting figures as the 2013 election would only net the Greens eight seats.

Furthermore, a swing from the Coalition to Labor of the kind the polls have consistently been indicating could pare it back all the way to six.
That’s almost certainly too pessimistic from the Greens’ perspective, as it assumes their own vote will not improve, whereas the current evidence of aggregated opinion polling is that it will increase by as much as 5%.

Even so, that would only make them confident of winning second seats in Victoria, Tasmania and perhaps also Western Australia, reducing their present complement of 10 seats to eight or maybe nine.

The second factor in the equation is Nick Xenophon, whose experience at the last election stands as exhibit A for the unfairness of the existing Senate electoral system.

Xenophon’s spectacular achievement in outpolling Labor with just under a quarter of the South Australian Senate vote should clearly have been enough to score his ticket a second seat.

Instead, his refusal to engage in preference negotiations left him unable to amass the extra 3.7% needed to cross the 28.6% threshold for a second quota, even as Bob Day from Family First snowballed his way into Parliament off a base of just 3.8%, having been placed ahead of Xenophon’s running mate on preferences by everyone from One Nation to the Greens. But under the 7.7% quota at a double dissolution, the same share of the vote would have got his ticket all the way to a third seat.

Whatever the problems Xenophon’s brand of populist parochialism might cause him from time to time, Abbott could only consider that a three-vote bloc under his control would take the sting out of the expansion of the crossbench.

All of which helps to explain another item that will be on the legislative agenda when parliament resumes — a Greens bill to reform the Senate electoral system, as recommended by a cross-party finding of the Joint Standing Committee on Electoral Matters earlier this year.

With Labor since having developed cold feet over the idea, and the Coalition showing no sign of stirring, the Greens are hopeful that taking the initiative themselves will force the government’s hand.

They should not be bowled over with amazement if they find that the government would prefer to maintain its existing strategy of masterful inactivity.

“Whatever the problems Xenophon’s brand of populist parochialism”

Selling Xenophon a bit short there William. With the departure of Windsor, Xenophon now holds about 40% of the good sense and policy clarity of the entire legislature. He is far and away the best operator in there, the best marketer/communicator, and across good policy as much as anyone in the house.

I would think that Abbott would not forego his higher salary and position of power any sooner than he has to, but maybe that wouldn’t enter his egotistical head.
I can’t see what the problem is with union officials being punished for wrongdoing similarly to company directors, as they all seem to get off scot free any way.

Brekky – bad as the first part of the quote was, I found “Abbott could only consider that a three-vote bloc under his control would take the sting out of the expansion of the crossbench.” to be bizarre.
Abbottrocious would have far more to fear from an empowered Xenophon than the current Senate when he could depend on a 4 vote block under the suzerainty of Clivosaur.

What might justifiably find Australian Citizens, to use your words, “bowled over with amazement” would be reading the blinkered hubris of Crikey Land.
This would include the language and analysis ‘skills’ displayed by Posters on this thread.
Over now [at 7.20 p.m.] to the Crikey Censor.

It’s a good deal less bizarre than your apparent belief that there exists “a 4 vote block under the suzerainty of Clivosaur”. Xenophon votes with the government more often than Lambie and Lazarus, albeit not Wang.