The ALP figure lands himself a Polish order of merit.

Arise, sir Bruyn. Over the weekend, Oz foreign affairs editor Greg Sheridan said we shouldn’t be so quick to spurn Bill Shorten’s “moderate” unionism, as Joe de Bruyn showed how successful a moderate approach to unionism could be.

The former SDA chief, Crikey readers would be well aware, has a controversial role in the modern ALP. Though he’s now retired, the socially conservative union leaders and politicians he’s helped put into positions of power are why the Labor Party refuses to do things like bind on gay marriage.

But de Bruyn is unfairly vilified in the press, Sheridan wrote, after praising the union leader to high heaven. You see, de Bruyn helped defeat communism.

“Next month the Polish government will present a high award to an Australian citizen,” Sheridan wrote.

“The President of the Republic of Poland has awarded Joe de Bruyn, until recently the national secretary of the Shop, Distributive and Allied Employees Association, with the Officer’s Cross of his country’s Order of Merit. This is a high award and it recognises a singular and magnificent commitment to fundamental human decency and wholly praiseworthy union solidarity.”

What is this award? Googling the English internet finds little record of it aside from Sheridan’s column, though Ms Tips has been trying since the weekend. Yesterday though, she asked a Polish-speaking friend to do his own search, and voila, he found a record of Bruyn’s award, in a government gazette from February 18. Polish-speakers can read it below, but the gist is that de Bruyn is among 31 people designated to receive the award this year, for “distinguished/outstanding service in supporting democratic changes in Poland”. As Sheridan points out, the SDA under de Bruyn’s leadership helped raise nearly $1 million in donated funds for Solidarity, the Polish dockworkers’ union that spearheaded a widespread social movement against communism in Poland. The SDA’s support for Solidarity is not out of character — both unions are conservative, Catholic-dominated bodies.

The officer’s cross is the fourth out of five possible ranks of the Polish order of merit. All ranks can only be awarded to foreigners, or Poles living abroad, in recognition of services to Poland. 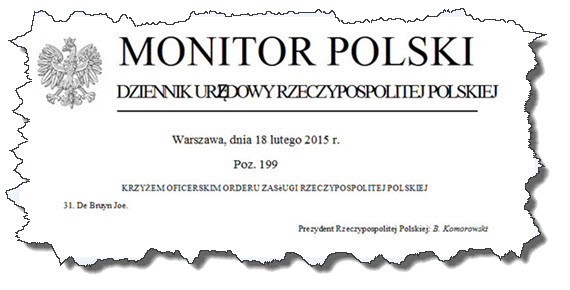 How the union movement finally came to embrace marriage equality