Rundle: so you think you can effect political change? Stop holding dance-offs!

The arts community is up in arms about Brandis' announced funding cuts. But it's going about that protest all wrong. Here's what would actually work. 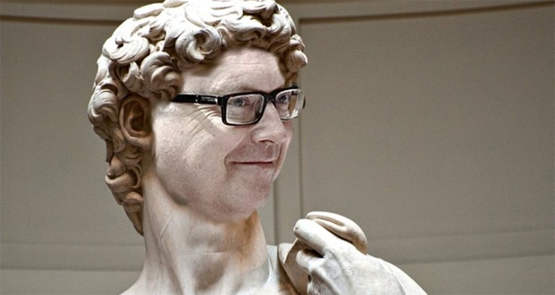 “Owing to bad weather, the revolution in Germany occurred in music,” satirist Kurt Tucholsky wrote, ruefully, of the failure of the avant-garde to bring about socialism. He later noted that the satirists had been so successful at taking the piss out of the Weimar Republic that they had helped to wreck it, and pave the way for Nazism. Then he shot himself. Today, he would be called a mid-career artist.

I was thinking of this while perusing the — very funny — George Brandis exhibition in which the Arts Minister was turned into everything, including Duchamp’s urinal. The hoard of Brandis cut-outs at the Melbourne #freethearts meeting last Saturday looked too much to take. And nothing but nothing was going to get me to attend the now famous/notorious dance-off when Brandis’ slash raid on the Australia Council was announced.

The artists’ submissions for the Senate inquiry into arts funding are flooding in, and a quick perusal of a few of them reveals the complexity of campaigning for the arts — or against the attacks on funding models by Brandis — in turn suggesting some of the problems the arts industry/community/whatever faces in campaigning for itself. Rightly, they emphasise the expanded role of arts consumption in the Australian economy. Rightly, they emphasise the importance of supporting artists doing cutting-edge autonomous work.

But therein lies a dilemma, because those two rationales can undercut one another. The latter argument, the original argument for funding the arts, was one of public good. It arose after World War II and was part of the idea of an expanded social and liberal state. It worked best when culture remained under the control of an elite, whether the government of the day be left or right.

But by the 1980s, this argument was starting to run into trouble. Thirty years of mass consumption culture, and shifts in social and cultural structure, had given mass culture a value in its own right. High culture was being questioned by an even higher — or more abstract — culture, that of academic theory. And in Australia, the progressive/radical cultural nationalism that had powered the push for a state-funded arts sector was being undermined by the rise of globalisation, and of a global culture.

That this came at the same time as the rise in cultural consumption became so great as to make it a real sector of the economy was both fortuitous and disastrous. Fortuitous, because wise arts ministers, of left or right, saw that whatever the arguments for high culture per se, a more complete culture worked only by having a large and stable hinterland where people could make a living while honing their crafts, and where popular and mass work could be cross-fertilised and made better by avant-garde work. People who make good mass-market films made and watched more “difficult” films earlier on, and so through all genres and forms, giving the sector more juice, etc, etc.

But that is of course an “industry assistance” model for the arts, and once you’ve conceded that, you’re in the bracket with wheat, sugarcane and superphosphate bounties (h/t Naked Vicar Show). The industry model not only undermines the art-for-itself model, it is also subject to challenge. Why do we need to fund anything at all that can’t find a market? Does it really make a difference? Couldn’t we run the whole thing as the film industry does, making loans and investment to productions, and recouping them from those that make a profit?

For a while we presumed that the right now understood the importance of cultural production/consumption in a post-industrial age — the model being Jeff Kennett, who saw the opportunity to use culture to push Melbourne ahead of Sydney, and buy some political pacification, by cossetting the arts. Brandis is a different beast, less rational than Kennett — ! — in a government of student politicians waging culture war, and desirous of acting on his own tastes, which run to fanboydom. What to do against such a beast?

The answer, I think, is that campaigning for the arts by the arts will only get you so far. Yes people care more about it than they did. No, they still don’t care very much about it. The arts community has to simultaneously defend principles that they themselves are in dispute about, advance a wobbly industry model, and try to have a political impact. In pursuing the third of these, the answer seems to me to be that the arts community has to turn itself into a political army of sorts, willing to campaign on issues other than the arts.

What will remove this government and put in one more amenable to the arts is not how it treats the arts, but its threat of a Medicare co-pay, a return of WorkChoices under a different guise, its air of general incompetence and preoccupation, etc, etc. Campaigning on this is what dislodges it, and so the arts community should organise itself, or be organised into campaigning on these things, as well as the arts.

Here I’m thinking of something like a 1000 x 1000 campaign — 1000 people will sign up to give 1000 minutes of their time — just under 17 hours — to campaigning during or before the next election, as directed by whichever non-Coalition party they’d like to sign up to. Commitment to the campaign means you’d make yourself available to doorknock, leaflet, help organise, set up, fill out rent-a-mobs, whatever, in whatever marginal seats you are directed to — and then campaign on the issues that matter most there. Once a thousand people are signed up, a second thousand can be got, and so on.

This gets round the Coalition’s bluff on the arts — that no matter how much the yartz squeak about funding cuts, it makes no difference to the Coalition base and may even attract a few votes from people who don’t want any money going to those “wankers”. Creating a resource of time and energy that will target the Coalition where it is most vulnerable will make them sit up and take notice immediately. An extra 20,000 campaigning hours on the ground is more than enough to swing a tight election.

Hopefully, it’s something that someone will consider. Of course campaigning about the issue itself should continue. Just no more frigging dance-offs.

“and once you’ve conceded that, you’re in the bracket with wheat, sugarcane and superphosphate”

“I’m thinking of something like a 1000 x 1000 campaign — 1000 people will sign up to give 1000 minutes of their time — just under 17 hours — to campaigning during or before the next election, as directed by whichever non-Coalition party they’d like to sign up to”

This sounds like great advice for the arts sector as well as the renewable energy sector and few others too!

Any number of Munch’s works (The Day After The Vampire, Anxiety, Melancholy …. The Scream) – with Muncher George “Cheshire Cat” Brandis somewhere?

Hear hear. Complaining will get you nowhere, least of all when you’re complaining about something which is, at best, of marginal interest to anyone. There’s something a bit sad & limp about a bunch of arts luvvies campaigning against funding cuts to the yartz. Particularly when there are so many more gobsmackingly outrageous things this government is doing that are causing zip outrage in the broader community. If the punters don’t care about a government passing laws to prosecute medical professionals reporting sexual abuse in our offshore gulags, they’re hardly going to get too exercised about funding cuts to a bunch of arts outfits they’ve never heard of. It’s not that George Brandis isn’t appalling. It’s not that his carving out of a big chunk of Australia Council to bankroll his pet projects of “excellence” isn’t a scandalous indulgence. It’s just that the awful fact is having a public whine about it isn’t going to achieve very much in this cant-be-arsed epoch we’re now enduring. So, if you really want change, use your creative smarts to campaign to get rid of these visigoths.

Congrats, Guy, on a piece which isn’t what a media outlet interested in serious political analysis would have as its most keenly Posted thread; but hey this is Crikey?