Keith Wheeler's anti-gay marriage rant defended by The Daily Advertiser. And other media tidbits of the day.

From automobiles to AIDS, free speech lives on. Wagga Wagga’s Daily Advertiser has today spoken out about the avalanche of criticism (not least from Ms Tips) that came its way earlier this week, after it published an opinion piece by columnist Keith Wheeler saying gay marriage would help spread AIDS and HIV through encouraging homosexuality.

In its editorial today (sorry readers, we couldn’t find it online), the paper says everyone has an opinion and “sometimes they stink”. Nonetheless, its editor writes, “as long as newspapers exist there will be a forum for debate”.

“For hundreds of years, newspapers have refereed battles between opposing points of view. Back in the dawn of the opinion page, those battles may have been about neighbourhood feuds or those darned tootin’ new automobiles running amok on the roads.

“These days, it’s all about climate change and same-sex marriage. It’s wonderful to see the dying piece of art that is the newspaper opinion page being brought to life as it has in The Daily Advertiser this week.

“Yes, some people may say some things that others find unbelievable but we all have to agree that the fact we can have such open discussion is worth having”.

In a news piece on the response, the paper said it was “inundated” with letters and social media posts criticising Wheeler’s stance on the issue. A journalist also spoke to two gay men who married in Canada, whose message for Wheeler was: “Go and meet a gay person”. These men said they were worried that the content of his article could have negative effects on the city’s gay youth. “People have a right to their opinion, but their opinion needs to be based in fact. I know the impact this kind of misinformation can have on youth and children – and it’s dangerous,” one of the men said.

Wheeler, however, was quoted standing by his opinion, saying that the majority of the Riverina community do not support same-sex marriage. He said that Riverina MP, Michael McCormack would be hearing his message loud and clear. “I fully appreciate that genuinely gay couples need to have a legal bond … but I don’t understand that having decided they are different from the rest of the community, they feel the word ‘marriage’ — which has a special meaning — has to be attributed to them,” he said. — Crikey intern Joely Mitchell

Netflix juggernaut rolls on. The company’s shares split overnight on a seven-for-one basis, the streaming video giant released its second-quarter results, detailing an extra 3.28 million subscribers around the world (to a total of more than 65 million) and in the US (no figure for Australia), and it revealed plans to, as it put it in its letter to shareholders “to make our service available throughout the world by the end of 2016.” The shares jumped 10% in after hours trading to end on US$108.25 (or US$757.75 on the old basis, an all time high). Later this year, Netflix launches in Japan, and it is still exploring its options in China. But it hopes to start there next year — without any sense of precise timing.

CEO Reed Hastings told a analysts briefing that Netflix will be successful in Japan due to aggressive pricing, local content and experience. But he expects the Japanese market to be slow to grow. Netflix will start in that market in the northern autumn. The international business lost US$92 million, while the US business made a profit of $340 million before tax. Reed Hastings told the briefing the company expected those losses to peak in 2016. Netflix says it will enter Spain, Portugal and Italy in the December quarter. — Glenn Dyer

Front page of the day. The story of Johnny Depp and his stowaway pooches is a saga that continues to test News Corp subs to their headline-writing limits. The Daily Telegraph has already used “Doggone Depp”, while  The Courier-Mail has used “Dog day in court” and “Amber alert” (punning on Depp’s wife’s first name). Today, the Tele has splashed with no fewer than two puns on the front page. They must be running out of options, surely. 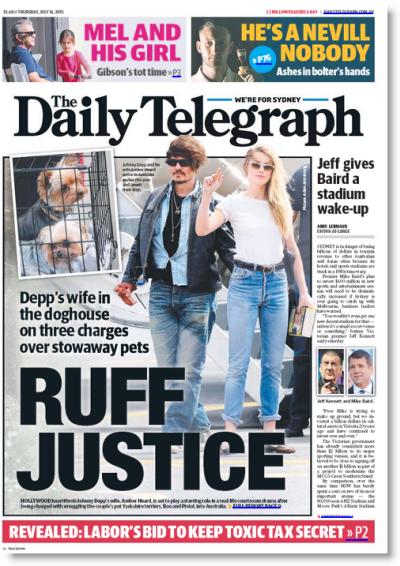 Barnaby Joyce and the long-lost relations