Australian actor Caitlin Stasey criticises magazine for a photoshoot that would be "utterly antithetical" to her work. 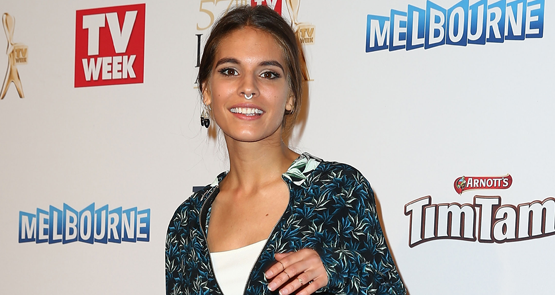 A Good Weekend feature piece and photo spread with Australian actor Caitlin Stasey has been delayed and derailed after she refused to accept proposed concept art, or “mood boards”, suggesting she pose in her underwear for the piece.

Back in February, the Fairfax magazine got in touch with Stasey, eagerly pitching a piece aimed at highlighting her views and work on the sexualisation of women. Earlier this year, Stasey launched a website, Herself.com, which features photographs of naked women. Women’s nakedness is often used against them, so the website aims to show the naked female form in an empowering, honest light, paired with interviews about women’s sexuality and own perceptions of their bodies. Stasey was the launch model for the website, but since then, many women of all shapes and sizes have posed in images and interviews.

It was this that Stasey was hoping to showcase in her Good Weekend feature earlier this year, and for a period of time, things were going well. Stasey says the magazine flew a writer out to Toronto to interview her and began preparations for a photoshoot to accompany the piece. But when Stasey was sent a mood board of possible styles, all featuring naked or barely dressed women, she refused to pose in the manner depicted. She told Crikey this morning that while she respected the “beautiful photos” of “brave, talented women”, she didn’t feel the depiction was in line with what she tries to do.

Mood board suggestions for the photoshoot emailed to Stasey

It was at this point, Stasey says, that the the feature began to be delayed. She and her publicist began trying to suggest other photoshoot ideas, but the magazine then said it didn’t have money to do a shoot and would instead use pre-existing photos. Later, Stasey says, she was told there wouldn’t be space to run a feature at all.

The actor and her agent have been pursuing Fairfax for some time trying to find out when the interview would run. But Stasey has decided to go public about her experience, which she first did in a series of tweets this morning.

“Good Weekend magazine suddenly doesn’t have the space to run a piece on me because I wouldn’t do a shoot in my underwear,” she posted. “They wanted to team an interview about my upset over the constant objectification of women with a sexualised photo shoot. I declined.”

“And miraculously, conveniently after I said I wouldn’t do it, they claimed the magazine was downsized and there was no space to run the piece.”

She wrote that there was a key difference between a woman appearing naked once for her own purposes, as Stasey has on her website, and of her being expected to strip off in order to sell someone else’s product.

Crikey has seen numerous emails sent between Stasey and her publicist over the matter, and between Stasey’s publicist and the person in charge of the shoot. In April, Stasey’s publicist wrote that she called up Good Weekend editor Ben Naparstek to ask why the shoot was not going ahead. According to the publicist, Naparstek told her over the phone that he was unwilling to spend money on the shoot unless the planned concept went ahead. The publicist says she told Naparstek that that concept had never been discussed with her or Stasey, and Naperstek apologised for the miscommunication.

Stasey told Crikey that given her entire work deals with the unnecessary and damaging sexualisation of women, to be asked to pose for such a shoot in the manner depicted is highly unsettling and disappointing. “And I’m sure that if I’d just gone through with the photo shoot, it would have run,” she said. “[But] it was utterly antithetical to everything I was doing with Herself at the time (and currently).”

While the process has been going on since April, Stasey says she decided not to take her concerns public at the time because she was still hopeful the feature would run, and she was keen to promote the work she was doing.

Good Weekend editor Ben Naparstek said he understood and respected Stasey’s decision not to pursue the shoot, which he defended as “a classy shoot with a leading American fashion photographer in line with the beautiful artistic imagery she’d published of herself on Herself.Com, which she’d just launched.

“We decided not to pursue the shoot when her agent offered us access to existing portraits instead. But with the Herself.Com peg no longer as strong, we decided to delay the profile until later in the year so it could be tied to the new seasons of her series Please Like Me and Reign.”

Update: This piece has been amended to include a response from Naparstek.

Nude or not nude, I’m not sure she is worthy of a story – hasn’t done anything much besides appear briefly in a soap, and many public statements have been ill informed and even bordered on being slightly mad.

Good on her! I wondered when her website came out if she wasn’t a bit deranged – but this shows she’s right on the money. And well done on exposing this foul attempt at exploitation – shame on Fairfax for trying to sexualise and exploit even women who are explicitly fighting against objectification.

Crikey’s always liked to expose media hypocrisy, and so-called progressive paper refusing to publish an interview with a feminist actor about her pro-female website unless she poses in her knickers smacks of hypocrisy.
(And thinking a stylized photo shoot designed to titillate Australia’s middle class dad’s is the same as the pics and articles on herself show’s some real ignorance).

Also, according to Junkee’s article on this today, their article from around the time herself launched on Stasey and Herself.com got a huge amount of hits, so there’s genuine interest in Stasey and the website even if you don’t think it’s news that GW’s editor isn’t that different to the editor of Zoo.
http://junkee.com/caitlin-stasey-good-weekend-canned-feature-nude-photos/61415

E. Vandort or Norman Hanscombe, I’m not sure either is worthy of a comment – haven’t done anything much about reading or comprehending the story about what she HAS been doing (i.e., what the Age interview was about and then their inappropriateness validating her position, let alone the 2 current series they used as an excuse IN THE VERY ARTICLE YOU ARE COMPLAINING ABOUT), and both public comments are ill informed and even border on being completely idiotic.
See what I did there?