From the terrorists at the NRA to Rupert himself, a lesson in Orwellian newspeak

There’s a spectre haunting public conversation, and it is the spectre of newspeak. 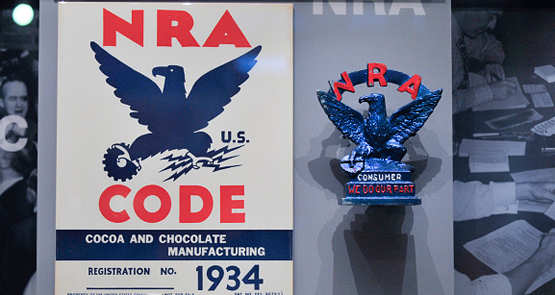 “A spectre is haunting America”, began last week’s retch by the National Rifle Association, and it seems odd that a largely ultra-Republican group should upchuck an unreferenced scramble to the Communist Manifesto. But the misuse of Karl Marx only seems odd for a moment. To read this screed by a gun-toting organisation with Australia in its sights is to be lost in a polluted field where words are no longer reliably hitched to meaning. In a plea for deregulation of Australian gun controls, language itself is deregulated by the NRA. Here, you can borrow one of socialist literature’s best-known sentences and use it for your own ultra-conservative project. And then, you can accuse the Australian government of giving its laws “Orwellian” descriptions when what you yourself have done, here and elsewhere, is commit an utterly Orwellian newspeak.

The name chosen for law passed by the Howard government following the 1996 Port Arthur shootings was, claims the NRA, Orwellian. The National Firearms Agreement, which was met by widespread national agreement on firearms, is, apparently, as misleadingly applied as the newspeak word for “free”. If you’re confused enough not to understand, that’s the point of newspeak when it’s used by the NRA, the government of Orwell’s Oceania or anyone. In an attempt to clarify: we unfree Australians are being deluded by a legislative change that did exactly what it said it would do. So, in this case, “Orwellian” means “to describe things accurately to the electorate”.

Words are no longer hitched to meaning for the NRA and, as is also the case in 1984, conclusions are no longer dependent on facts. The erroneously named National Firearms Agreement, an agreement on firearms with which the nation overwhelmingly agreed, was not free. Instead, says the NRA, its cost was “a massive price in liberty”. Selecting a range of Australian gun death statistics and moments of local protest with a partial care that shames even the best cherry picker, the post, “Australia: There Will Be Blood”, is a Ministry of Truth moment. It’s newspeak, and it’s also violent propaganda. If written by a foreign Muslim organisation, this horrifying nonsense would be immediately subject to local terror laws, and its representatives would be banned from visiting Australia faster than Snoop Dogg.

The American freedom to promote the antiquated Second Amendment is upheld by recourse to a much more admirable First and so, those US citizens who retain an interest in not dying horribly can do little to hush the National Rifle Association. When the powerful organisation advances its case with slogans like “Guns don’t kill people, people do”, even in the face of Newtown or Charleston or Columbine, where maximum killing efficiency was clearly achieved with guns, Americans are forced to listen. When the NRA brings its lunacy to analysis of Australia, though, it’s tempting to champion our lack of a bill of rights and shut these online terrorists up with a bit of deep-packet inspection.

Of course, to those of us who read and were duly warned by Orwell, such censorship is abhorrent. Yes, even for an armed and foreign lobby group that seeks to impose its will and its law on our nation. We cannot ethically stop them from speaking, even if our local anti-terror laws might demand it.

But perhaps what we should do is send them a copy of 1984 so that they can read, as others have, a work that cautions against the inept imposition of foreign law on sovereign nations, of the danger intrinsic to machines and of using absolute bullshit to advance a case.

If there is anything “Orwellian” here, it is the language of the NRA, which redefines “liberty” to mean the right to wield pump-action power, “growing consensus” to mean a few especially loud nutters and the term “Orwellian” itself to mean unusually frank political discussion. But we can’t blame the NRA entirely for its tendency to conceal meaning, because just about everybody’s doing it.

Detaching words from their usual order has long been a tactic of the powerful and in his popular 1989 work on the practice, Doublespeak, US English professor William Lutz shows how even the ancients used language to deceive. Writing of the Peloponnesian War in the fifth century BC, Thucydides was careful to describe acts of cowardice as “courage”. Describing a brutal massacre at Gaul, Julius Caesar used the term “pacification”. Newspeak isn’t especially new, but it has certainly become more common and is now hardly limited to protecting the interests of government.

Newspeak can be used by news organisations in the service of their prominence. Andrew Bolt, of course, does it often and loves to claim that social disadvantage is actually social advantage. And then, when he’s been both broadly published and read, he claims, on the front page of the Herald Sun, that he is being “silenced” even as he is shouting loudly to the largest possible audience. Recently, we read Mark Latham describe Rosie Batty as a tool of “left-feminist” agenda and not, as she plainly is in speech and as Latham likely knows her to be, an independent advocate who often concedes to her lack of familiarity with both feminism and politics.

There is perhaps no more curious and blatant moment of newspeak than that which had Rupert Murdoch describing his media competitors as “elites”. Those news organisations that dared criticise his own are not, in Murdoch’s description, smaller companies punching above their weight but powerful and privileged bullies picking on the little guys of News Corp.

There’s a spectre haunting public conversation, and it is the spectre of newspeak. We will not be unfree until we pay the high price of liberty and restore the Second Amendment rights of Australians who, to be truly unfree, must accept the law of the United States as their own. Or something. I can make little sense of all this because there is no sense to make. Save for the fact that there is one moment for which I remember Howard fondly and that is when he forced us to pay the “high price” of living with a diminished fear of bloody death.

Things may be Orwellian, but not in the way the right believes

Rundle: midnight, in a Euro-hell dreamscape

Helen, you wrote, “Of course, to those of us who read and were duly warned by Orwell, such censorship is abhorrent.”
Those who have read and UNDERSTOOD Orwell’s 1984 are aware he was actually referring to dangers he saw already occurring in 1948 which was incidentally his working title for the book.
When it was published I recall the furious attacks here in Australia by “progressive” Left circles; but “progressive” has long been the label used by those whose support base among Australian Voters is weak hasn’t it.

Prolix proof that water is wet.

Like Humpty Dumpty said: ‘When I use a word…it means just what I choose it to mean…”

@norman mccormick
The “progressive” Left’s attacks on 1984 only proved the Abraham Lincoln’s comment that “You can fool all of the people some of the time…”.

Helen’s article illustrates that newspeak is not the sole preserve of the Left – the sign over the gates to Auschwitz claimed “Work makes you free”. (I claim barleys from Godwin’s Law).

William F. Buckley’s conservative yet anarchic Democracy meets 21st Century hedonism. Do we actually need the oppressive Ministries of Love, Peace, Plenty and Truth or is it just what the people want?

I think Huxley was more accurate than Orwell.

“Without economic security, the love of servitude cannot possibly come into existence”

Hey, @Itsarort. These are the sorts of questions that trouble me, too. Compliance with power is especially interesting in the present as it generally seems that people in the west believe themselves to be less compliant than in any previous era. Despite the fact we are more obliged to more conventions and more constructed than ever before. It is absolutely true that we have begun, much more like Huxley suggests, to affirm the boot-in-the-face. Orwell described it as an imposition against which rebellion would remain possible. Even though 1984 describes a time of transition to a simple totalitarian order which would eventually find its way into the bodies of its servants, I don’t think Orwell considered that we would, at one point, be begging for the boot. I guess he saw the boot as more literal, as you point out, and inflicted by just one institution whereas Huxley sees it as being worn on many feet and less obviously brutal.
Orwell was a nice liberal, though. I really enjoy some of his essays because he is a good and reasonable writer but I find his moderate insistence that extremism of any kind is the root of all evil boots etc. wanting. The lure of moderate comforts can conceal a power just as “extreme” as that which Orwell feared.
To help resolve the question of “why do we think we are so damn free?”, I think Foucault remains a really good guide. Discipline and Punish and his histories of sexuality both show how formal and less formal institutions can produce our un-free ideas about freedom. It’s getting a little long in the tooth, but the Dialectic of Enlightenment by Adorno and Horkheimer is still useful as is the eminently readable sixties best-seller by fellow Frankfurter Marcuse, One-Dimensional Man. I would also say that Baudrillard is fantastic on this topic even though people tended to laugh at him as a French Trendy. If you haven’t read it, this is the first chapter of his famous book as used in The Matrix! http://www.egs.edu/faculty/jean-baudrillard/articles/simulacra-and-simulations-i-the-precession-of-simulacra/ Go to the passage on Watergate and how it functions as a false proof of our freedom. In short, it’s kind of “We think that we are safe because there are still Woodsteins to show us the way from the darkness by illuminating power”. Also, of course, you can read the psychoanalytic take on the relationship of the self to the social. Civilization and its Discontents is the big book. I haven’t read Freud’s most famous son Lacan because I don’t think I am either bright or patient enough. But people tell me that I must. I apologise if you are already familiar with these texts. These are just those I have found most useful in understanding power/ideology/the technologies of the self. Perhaps one of them will prove useful to you.
It’s curious that so many in the west think of themselves as pure agents free from controls. I tend to think of myself as a bit of a machine and have never felt that either I was (a) liberated or (b) (as I got older and thought more about it) that liberty was something even possible to attain in social order. It does my head in that mass culture not only produces mass conventions which extend to everything, including the sorts of things you should have in your home and the correct foods to eat etc., but it produces the illusion of mass freedom. There is a case to be made that we never have been so un-free. I find if one tries to make it in public, one is called an opponent of freedom. Which is funny.