Freedom rings no more. Let all those defamed by Andrew Landeryou breathe a sign of relief, as the archives of scurrilous blog Vex News have fallen silent. Visitors to the blog, which for several years was Australia’s pre-eminent source of salacious (and occasionally true) political and media gossip, are greeted with this …

… which makes it look like at some point someone stopped paying the bills to keep the archives up. The number listed is that of web hosting service GoDaddy’s support line

Melbourne Labor-Right identity Landeryou — referred to by enemies, for obvious reasons, as “Slanderyou” — is married to Kimberley Kitching, who ran for Labor preselection in the ultra-safe federal seat of Gellibrand in 2013. By June that year she’d pulled out of the race, but in July Landeryou announced his departure from Vex News, saying the controversial website had cruelled his wife’s chances.

“It horrified me that there were people — including some who loudly profess feminism and gender equality in public forums — who wouldn’t vote for my wife, Kimberley, in a recent preselection because they assumed my views were hers. Some admitted it, quite directly, to her. I think she initially laughed about the preposterous and silly presumption that a highly accomplished woman would outsource her thinking to her husband until she realised they were deadly serious,” he wrote in his farewell editorial.

While Landeryou said at the time the website would be passing onto the stewardship of others, it ceased publication, though the archives were up until last month. Landeryou’s pre-Vex News blog, The Other Cheek, is archived by the National Library through its Pandora service. Vex News, however, doesn’t appear to have been thus preserved.

We tried to contact Landeryou this morning to ask where the site went, but didn’t get a call back.

Labor’s wild West. Tonight the Western Australian branch of the Labor Party will elect its new secretary, after the resignation last month of Simon Mead, who had held the position for seven years. It has been reported that he was pushed out by the United Voice faction after concerns were raised about his performance, but Mead told reporters his departure was his own decision. Mead was given a hefty payout by the ALP — a tipster tells us it was $266,000 (calls and emails to the ALP in WA to confirm the figure weren’t answered this morning). It’s been reported that Patrick Gorman, former staffer to Melissa Parke and Kevin Rudd (with resultant appearance in The Killing Season), is the most likely contender for the role. Gorman is currently the public affairs director for United Voice in Sydney. Gorman won’t be without contenders, though, with a tipster telling us that former upper house MPs Jon Ford and John Halden are also to challenge for the job. Ford boycotted the state Labor conference last year after powerbroker Joe Bullock was given higher standing on the Senate ticket than former senator Louise Pratt, leaving her with no chance of election. Federally the ALP holds just 20% of lower house seats, and is struggling with its PR at a state level — what will a new state secretary do about it?

Wild west part two. Speaking of PR issues for WA Labor, the party that used a “Debt Monster” to attack the Barnett government’s budget, a caller to 6PR this week says the party is still struggling to get its message to constiuents. Apparently state leader Mark McGowan took a TV crew on the freeway on Monday to draw attention to issues with congestion — but the sight of McGowan made motorists slow down even more to take a squiz.

Pluto tweets from the void. Last night we saw more of Pluto than ever before, and seemingly evidence that Disney character Pluto’s name might have not been a coincidence. Of course nothing is momentous anymore unless there’s a Twitter account to go with it. We liked this one from @PlutoThePlanet (bit optimistic in the title there):

More changes at AGNSW. On the eve of the Archibald exhibition, staff at the Art Gallery of NSW are in shock. They were told by management on Tuesday that the gallery aimed to save $800,000 in its 2015-16 budget, mainly through voluntary redundancies. Morale at the gallery, which is seeking $450 million-plus recurrent funding for the new Sydney Modern building, is at an all-time low.

Volunteers too are up in arms. After being dismissed last year from their decades-long task of selling exhibition tickets, they learned yesterday that the membership desk at which they recruit support for the gallery has been exiled from the building. Instead outside private consultants will be hired to review the Art Gallery’s Society, the largest and most successful membership organisation of its kind in the country, on the grounds that “things must change”.

Changes under the rule of director Michael Brand, now three years into a five-year contract, appear to be all negative, say staff. While annual exhibition attendances in Sydney are lower than under former director Edmund Capon, in Melbourne the NGV is packing them in, with its blockbuster show from The Hermitage due to open at the end of this month. We asked the Art Gallery of NSW what was happening with the redundancies and the membership changes but have not yet heard back.

Playground of power. Following yesterday’s tip about the power plays in the Victorian branch of Young Labor, we are told that Josh Gilligan, touted by one tipster as a challenger for president to Unity’s Will Bennett, is convenor of the NUW faction in VYL — so why is someone trying to encourage him to run against Bennett? If you know, you can drop us a line here.

Badass Black. Overnight the youngest MP to be elected to the UK Parliament since the 19th century gave her maiden speech to the House of Commons, and covering everything from William Wallace to the plights of job seekers in Scotland. At just the wee age of 20, Mhairi Black looks to be an interesting voice in UK politics: 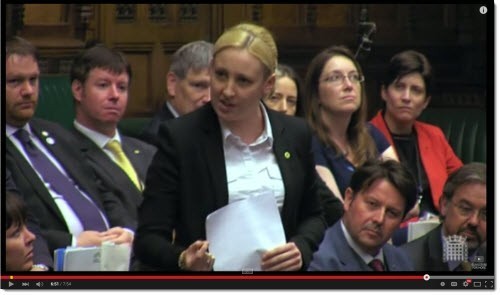 Wow, she is a class act. Wasnt our youngest parliamentarian that O Chee character who contributed nothing but got to draw the huge pension for life after two terms?
Whatever happened to him?