The Daily Telegraph gravely misrepresented a Muslim lawyer on page 4. Now the paper has apologised ... on page 53.

A Sydney lawyer The Daily Telegraph described as the “female companion” of two men it accused of “homegrown extremism” is considering legal action against the tabloid.

Lydia Shelly’s lawyer, Stephen Blanks from SBA Lawyers, says she will be considering her legal options, after the paper described her as the “female companion” of two youths convicted of using false IDs to purchase airline tickets to fly to Sydney from Perth. Shelly was pictured alongside the young men on the front page yesterday, though her face is blurred. On page 4, however, under the page header “Home-grown extremism” and the headline “Soft landing for fake Sheik”, she is prominently depicted with the men, two of her clients, and described as their “female companion” in a caption.

Shelly sought legal representation yesterday over her depiction, saying in a statement that she was no “home-grown extremist”, but was rather the men’s legal representation, acting for them on a bail matter. She said the article “deeply offended and humiliated [her] personally and professionally”.

Blanks yesterday contacted The Daily Telegraph with a statement of concerns, requesting an apology and correction. Blanks told Crikey this morning that the paper denied that what it had printed was defamatory. The News Corp tabloid has not agreed to apologise, but did run a clarification in its “For the Record” section, acknowledging Shelly was acting as a lawyer for the men. The clarification is printed on page 53 of The Daily Telegraph this morning … 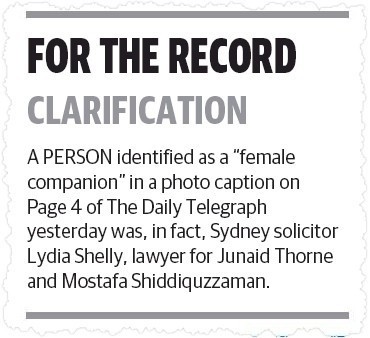 Daily Telegraph managing editor Rhett Watson told Crikey via email: “The mistake regarding Lydia Shelly was made in the production process and we have acknowledged that with a clarification in the newspaper today.”

Asked if he believed the depiction of Shelly in the paper yesterday was defamatory, Blanks said there was “certainly an arguable case”. “As with all things legal, we’ll consider our position carefully. Lydia will consider what further steps, if any, she should take about this.”

In her statement, Shelly said the publication caused her and her family “great distress”. “It is deeply disappointing that as a professional Muslim woman, I have been depicted in the manner chosen by The Daily Telegraph.”

Photos of those accused of extremism or terrorist offences have caused trouble for publishers before. In April, The Courier-Mail scrubbed a photo of “ISIS doctor” Tareq Kamleh from online distribution, because a South Australian doctor was pictured next to an article that quoted an anonymous former colleagues of Kamleh about his personal habits and characteristics. The doctor, numerous sources told Crikey, was concerned that she had been pictured with Kamleh, and by the possibility that readers might assume she was the one who had spoken anonymously to the paper.

And in May, The Age reached a hefty settlement with the family of Melbourne teen Abu Bakar Alam, after what lawyers have taken to describing as one of the most open-and-shut cases of defamation in Australian legal history. The Age published a front-page apology to Alam, after having some months earlier used a photo of him from Facebook describing it as a photo of Numan Haider, a Melbourne teenager who was shot dead by police last year after attacking an officer with a knife.

If only, Myriam, you pursued Fundamentalist Terrorists with various Australian connections with the same vigour; but that hope is probably a bridge too far away?

“Freedom of the Press”.

Getting so’s we’d be better off with Freedom from some of the Press, certainly the stinking corpse where news died.

I would like to see News Limited hit with a hefty settlement on this one. Say something that would inflict some pain on an owner with deep pockets. To qote the famous Norman Hanscombe “But that hope is probably a bridge too far away?”.

Good on you Norman, that bridge at Arnheim is an awful long way from Australia. You might even say that it is a bridge too far.