It was a week all about Bill Shorten, if media coverage was anything to go by.

After giving six hours of testimony at the Royal Commission into Trade Union Governance and Corruption, Opposition Leader Bill Shorten was first in television and radio coverage across Australia this week and a very close second place on our index overall. Shorten answered claims he failed to declare a campaign director payment, a $500,000 conflict of interest with glassworks company ACI, and agreements with Thiess-John Holland and Cleanevent.

Overall the top three remain unchanged, with Agriculture Minister Barnaby Joyce opposing the Chinese-backed Shenhua coal mine in his own electorate approved by Environment Minister Greg Hunt (up four places this week to fourth place), and voicing his disappointment as Indonesia drastically cut its cattle permits. Tasmanian Senator Jacqui Lambie returned to the top 20 this week as she called for Joyce to resign and met with Geelong Mayor Darryn Lyons. Federal Treasurer Joe Hockey jumped up six places with a press conference about the China meltdown and possible Grexit, with his comments about wind turbines being ‘utterly offensive’ making a comeback after Hockey and Finance Minister Mathias Cormann ordered the CEFC to stop investing in wind farms in favour of newer technologies.

New South Wales Premier Mike Baird rose 10 places as his government shut down “extreme terror tours” of the Belanglo State Forest, where several victims were murdered by Ivan Milat, and addressed concerns from farmers at the Farmers Association annual conference, specifically about trespassing laws and the Shenhua mine. Shadow Agriculture Minister Joel Fitzgibbon was just below Baird in tenth place, with Shadow Minister for Climate Change Mark Butler joining in on discussions surrounding renewable energy investment.

The Shadow Industry Minister, affectionately known to some in the ALP as ‘Kim Il Carr’, went all out this week and said the Abbott Government has all the hallmarks of a totalitarian regime. 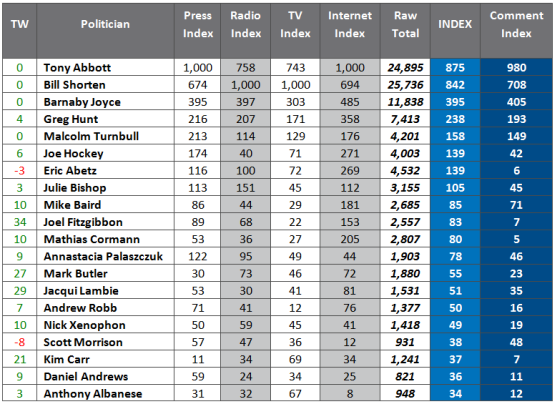 Traditional media may have been all over Shorten’s appearance at the royal commission, but social media didn’t really care.

The royal commission has seen the Opposition Leader suffer a hit in the polls against the federal government, as well as negative sentiment on talkback radio.

Well this is inconvenient; I was far more prepared to make a joke about Shane Watson. Author Harper Lee made it back into the headlines due to the release of Go Set A Watchman, the follow-up to To Kill A Mockingbird.